Reflections on the death of a tree 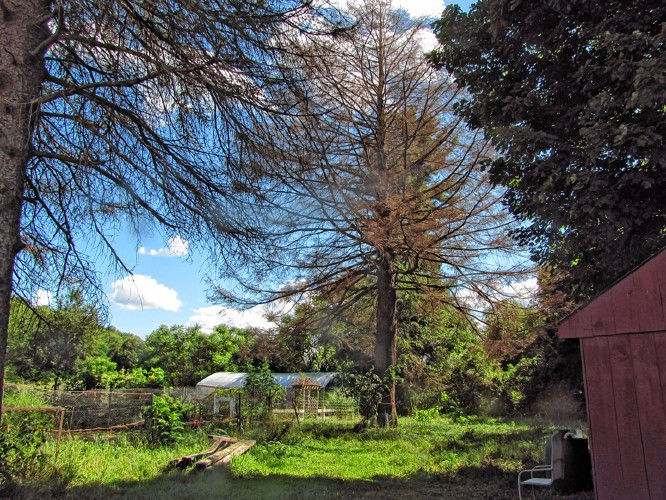 By Benjamin Weiner For the Gazette

Sometime in early March, I noticed that the ground around my chicken coop and kitchen garden was littered with gray needles, and, looking up, it occurred to me that the fir tree might be dead.

I didn’t want to believe it, and took refuge in the thought that these trees sometimes do shed as part of their natural cycle. There was still a green twig or two jutting out among the naked branches. But as the season progressed these, too, withered away.

I have yet to determine a precise cause of death, but I strongly suspect it is, in one way or another, related to climate change. So many trees, in many different regions, have fallen prey to the effects of shifting — and warming — weather patterns, some by exposure to unprecedented degrees of heat and drought stress, others through the infestation of opportunistic beetles and bacteria.

My cursory reading suggests that Douglas firs have been particularly susceptible.

This tree was quite beautiful during the few years I knew it. Elegant limbs swept down in dark green waves of lush needles. Once I climbed up nearly to the top of my tallest ladder to hang a bat-box on its trunk, which tapered from a base, so wide that it would take two pairs of arms to encircle it, to a slender pinnacle in the sky.

Hostas had been planted at its roots, and an elder bush sprung up improbably beneath the canopy, which, when my goats didn’t nibble it down, set sprigs of dark purple berries in the late summer.

I have owned and operated my homestead in Deerfield for five years now, the same five years during which climate change has apparently accelerated to a gallop, and also a time when my wife and I brought a beautiful son into our lives.

The notion of homesteading entered my mind in the wake of the 2008 market crash, when I was caught up in the thrall of unnerving economic prognostications. Ecology was also always a large part of the equation — the urge to situate my life more reasonably within the parameters of biophysical reality. But, in the end, what has kept me motivated through the litany of chores that make up the rhythm of a growing year is an abiding satisfaction in my labor.

The homestead is my little way of trying to bless the Earth with the work of my hands. I have learned the skills to coax from these three acres an increasing amount of the food that comes to my family’s table, from summer vegetables, grapes and berries, to the larger storage crops of roots, squash, corn, beans and potatoes, to the eggs I gather from the coop, the fresh milk I bring from the barn every morning, and the raw honey. All of this is done with minimal reliance on mechanized tools, and in garden beds surrounded by fallow land where wild growth and insects thrive, and where I welcome skunks, deer, bear and rabbits, hawk, bumblebees, hummingbirds and, once so far this summer, a monarch butterfly.

But this season the naked fir has loomed over the landscape, which has otherwise remained verdant and productive despite the drought. It rises like an ominous totem, a ghost of terrors present and yet to come, calling to the surface of my mind thoughts that are never really buried all that deeply.

It makes me think of this past winter that wasn’t a winter, with 70-degree days in late December, of parts per million carbon and methane, melting ice and rising seas, a seemingly endless parade of broken heat records, refugees and extinctions. In my darkest moments, I see the sweet face of our little boy and despair for a future belonging more to a dead tree than to him, though I have finally learned that, although my sense of integrity will not allow me to ignore these thoughts entirely, there is little value in dwelling on them for too long. Better to save my strength for the continuing effort to live well in the shadow of a problem so much broader than the compass of my own two hands.

I will have to bring the tree down sometime soon, though the birds and squirrels still find it useful, and a last crop of cones still dangle, petrified, at the tips of its spindly fingers. It is too dangerous to let such a magnificent tree rot and fall in the middle of my property. If only it were as simple to uproot what it represents to me. Instead, in a spirit I have heard effectively described as “hopeful pessimism,” I will keep doing what I can to cast up my share of the rich and colorful pageant of life.

Benjamin Weiner is the spiritual leader of the Jewish Community of Amherst.