Relishing the unexpected in field research

By Christine Hatch for the Gazette

(Editors’ note: The Earth Matters column briefly suspended publication in the Daily Hampshire Gazette until a contract with the union representing the paper’s employees was agreed on. We were pleased to learn that the Gazette’s publisher and the union have reached a settlement. Earth Matter will resume publication in the Gazette as soon as possible.)

In early December of 2009, my colleagues and I had spent the day in a high tiny headwater stream in Great Basin National Park listening to elk bugling all around us while we did our work. That evening, at dinner in Baker, Nevada, we heard the hunters at the bar complaining, “I didn’t see a single elk all day long!” Elk season opened that day, and all the animals were inside the safe boundaries of the national park. Nature knows things. Learning to listen to nature’s unexpected wisdom has fueled my passion for science. 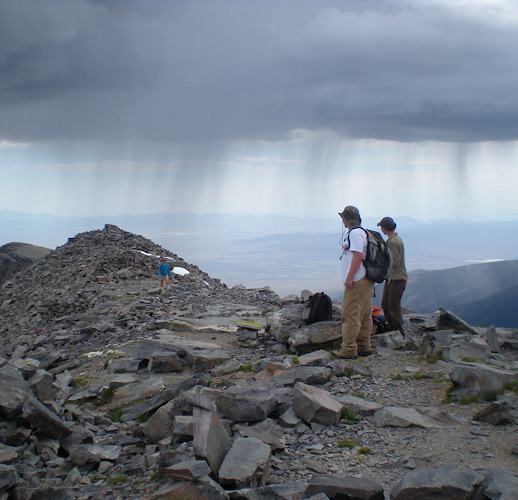 Most of the water in the Great Basin falls on the mountain ranges, not in the valleys. Hiking on Wheeler Peak in Great Basin National Park, Wesley Henson and Tracie Jackson get a bird’s eye view of a spontaneously generated storm. Photo: Christine Hatch.

Field work doesn’t always go as planned, and when it doesn’t, you often learn things regardless. Our work in Great Basin centered on trying to quantify how much groundwater was moving through the streambeds in the park. Stream water can seep into the ground, and groundwater can seep into the stream. This matters a lot in the high desert where every drop of water in the stream “belongs” to someone by right. We measure stream-groundwater connections in different ways: by measuring flow at different places along the stream and calculating the difference in flow between them, with miniature wells called piezometers that are driven into the streambed, or by measuring changes in temperature with fiber-optic cables laid along the streambed. 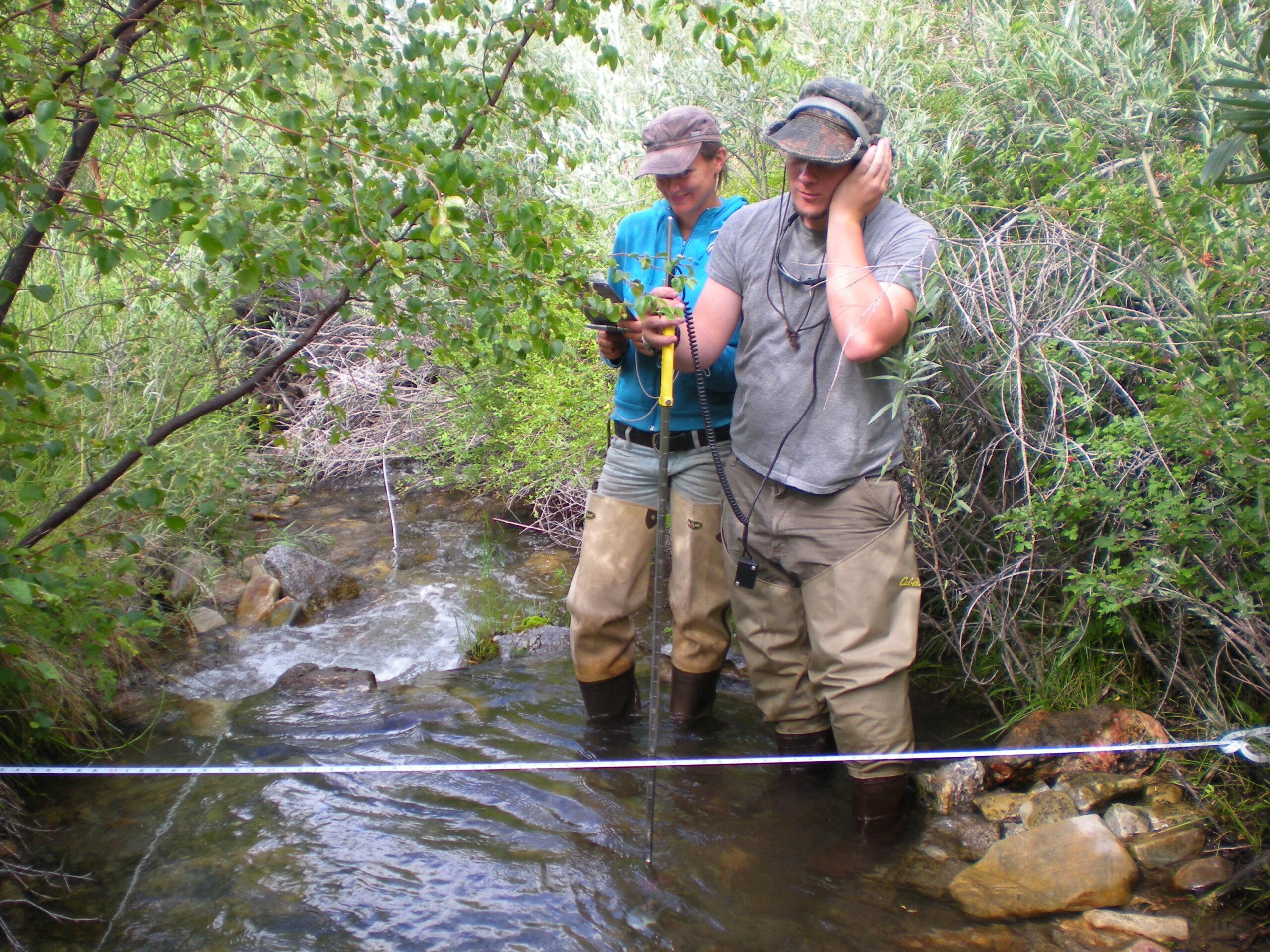 Fiber-optic cable in one of the easier reaches of Great Basin National Park is laid in the streambed to measure temperature and track interactions between the stream and the groundwater below. Students Michaela Woerndl and Wesley Henson measure stream flow along the reach. Photo: Christine Hatch

Since there isn’t a lot of water to go around in this high and dry climate, the most abundant vegetation is concentrated near the water and it’s feisty, outfitted with spines and stickers and dense branches to persist in a challenging environment. The tough plants choking the riparian corridor made the job of laying a cable along the streambed (while taking care not to break the fragile glass fibers inside) extremely challenging. During installation, we snaked the cable between the dense brush, pulling and winding our way along, getting scratched and tussled by the stream bank plants. Once, in frustration, I threw myself at an impenetrable wall of bushes. Surprise! I found myself face-to-face with a branch full of bright red, white and black currants. The delicious impromptu snack revived me and my companions. We snacked on the berries all afternoon, discovering that all three were golden currants, Ribes aureum, a native species found in wetlands and elsewhere and adapted to both drought and standing water — perfect for certain high desert streams. 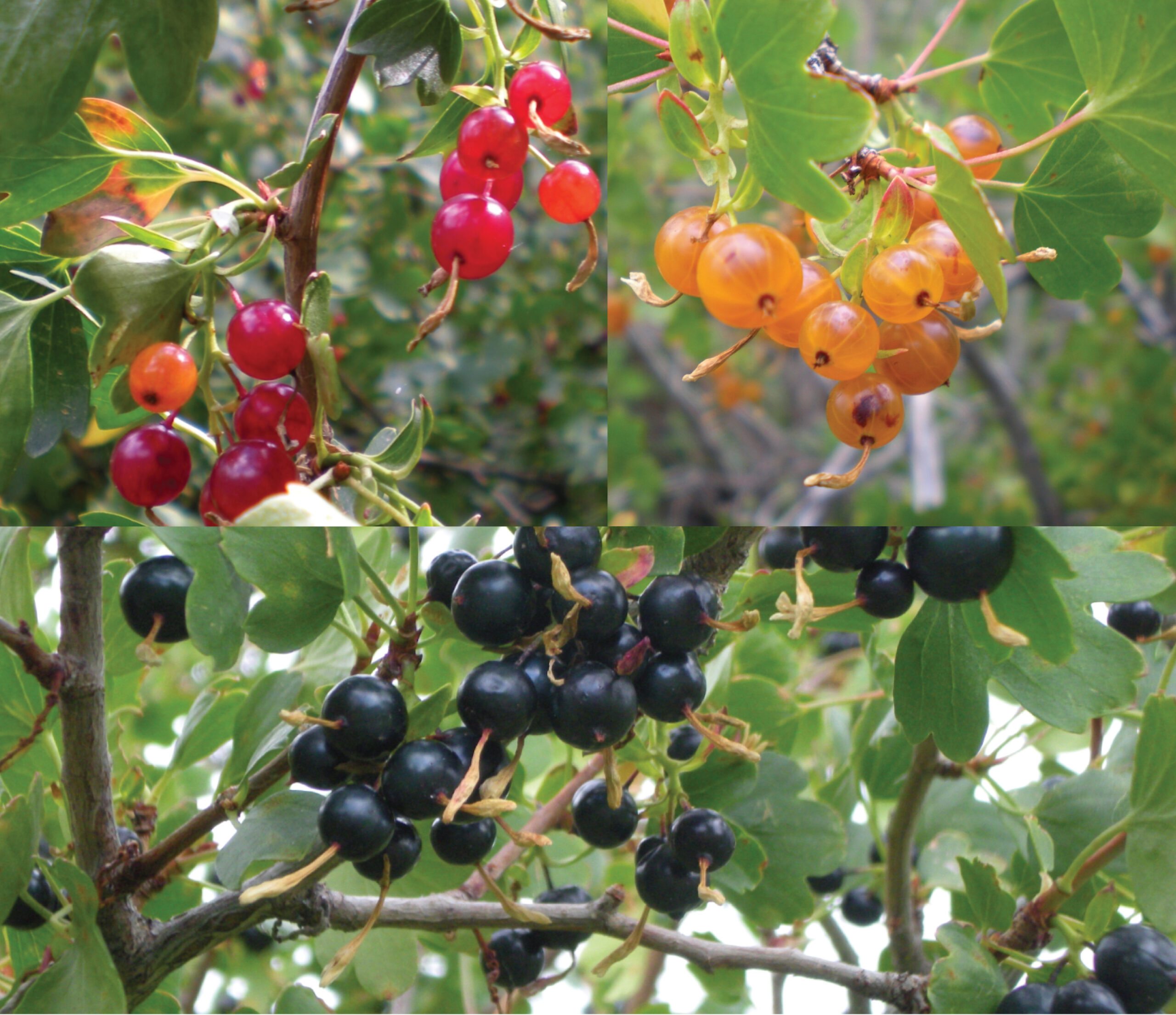 One of the sweetest surprises doing field work in Great Basin, after battling through dense, spiny riparian vegetation was crashing face-first into abundant golden currants, a native wetland species adapted to both drought and standing water: perfect for a high-desert stream. Photo: Christine Hatch

Measuring the water level in one stream piezometer, my meter failed. Despite being clearly submerged in the water inside the pipe, it would not beep. Eventually I wondered, “could it be that this water is so distilled that it can’t make the connection between the electrodes?” Sure enough, the meter depends on dissolved salts, ubiquitous in almost all water everywhere, to function — but this water had the lowest salt levels, and therefore the lowest electrical conductivity that I’ve ever measured.

On another day, we were instructing students on the proper technique for measuring stream flow. First, you create or find a section of stream that is as straight, flat and rectangular as possible. If there are large cobbles, debris or plants in the way, you move them aside. From the outset, we encountered problems. Why wouldn’t this boulder move? Why did the streambed feel like cement? Why did the rocks have to be plucked from it? This Snake Creek mystery was one of my favorites of this whole project. We drilled a large (5-inch diameter, 105-foot deep) well five feet from the stream to conduct a pumping test to see if we could pull water from the stream into the well. It was dry. What was going on? When we installed streambed piezometers here, it was easy going at first, but at about 30-cm depth it seemed like we hit pavement. Bang! Bang! Bang! BOOM! And we pushed through, to easier going deeper down.

All of these strange occurrences, together with some water chemistry data we collected, began to paint a picture of what was happening. Water enters the ground high up in the Snake mountain range, where most of the precipitation falls. It percolates into the fractured rock, especially the most permeable limestones. There, due to its acidity, it dissolves some of the limestone. At the base of the mountain front, under pressure from the drop in elevation, it pushes back up and out of the ground — we found some beautiful springs and seeps as further evidence. 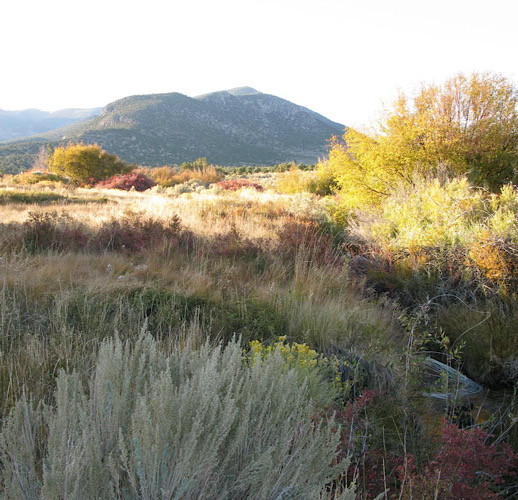 It was challenging to lay fiber-optic cable on the streambeds choked with riparian vegetation, and even more difficult to pull it out. As we struggled to communicate with each other between 200-meter spans of cable, we enjoyed the fading light, each of us with our own private snarl of cable, alone, together. Photo: Bill Vanliew.

In most dry systems, streams “lose” water, which percolates downward through the bed. But in Snake Creek the water was oversaturated with dissolved calcium carbonate from the limestone, and water percolating into the ground deposited the calcium carbonate between the sand and rocks in the bed, creating a layer of “cement” that sealed the rocks in place and prevented water from percolating downward. The chemistry indicated this would occur, but could we prove it? At the end of the day, doing field work by headlights, we used an even smaller piezometer attached to two tubes, to measure the difference in potential “water energy” or head, between the stream and a point below it in the bed. We pushed in a few centimeters and measured. A small difference. We pushed it in a little further and measured again. A little bigger. About 30 centimeters below the streambed, the difference in head was several times greater than the depth — a total disconnect  between the amount of water above the cement and below it.  The calcium carbonate “cement” layer was in fact preventing water from percolating downward. We’d solved another puzzle.

This is why I love being a scientist.

Christine Hatch is research-extension Liaison for the Center for Agriculture, Food and the Environment, and extension associate professor of Water Resources and Climate Change in the Geosciences Department at University of Massachusetts Amherst. She is a leader of the RiverSmart Communities project, supporting ecologically restorative flood prevention and remediation in New England.