Restoring a wetland despite a drought

When the bulldozers come to the field site you’ve affectionately spent five years measuring and studying in minute detail, it feels like someone is tearing up your living room and smearing mud on the couch. As a geologist, it is also a rare and wonderful opportunity to lift off over 100 years of human land use and look underneath, and back in time to what once was.

In February, we put thermal eyes in the sky to search for groundwater in the Foothills Preserve in Plymouth. After a great deal of computer processing, we achieved a thermal map of a long-fallow cranberry bog, scattered with bright spots indicating locations where groundwater was seeping up and out to the surface.

By April, the bulldozers had begun the process of returning this dry, sandy site to the wetland that was once here, after the glaciers retreated 14,000 years ago. To our great scientific gratification, everywhere we identified or predicted the occurrence of groundwater springs, bulldozer scoops were quickly followed by water rushing into the hole. 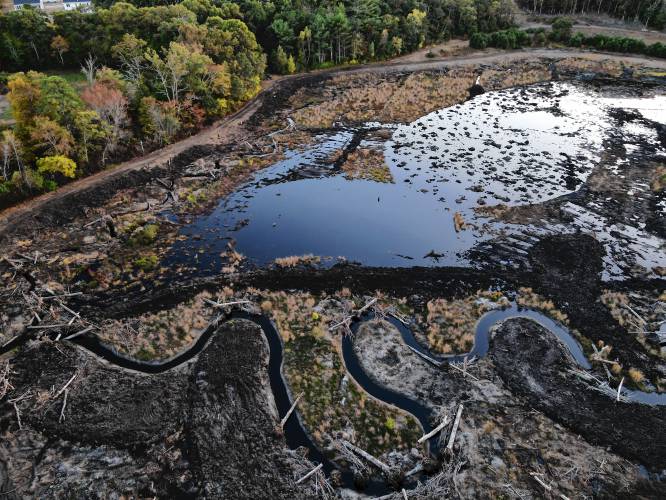 Wetland restoration in progress at Foothills Preserve, Plymouth. Wide, straight ditches have been filled and replaced by complex meandering streams, and shallow depressions have already filled with groundwater. CHRISTINE HATCH

Each of the holes had a characteristic look: a Kit Kat bar of sand-and-soil layers on top, followed by an abrupt transition to a goopy, fibrous, black or reddish black mass below. The soil thus showed the transition from post-glacial wetland to intense cranberry cultivation in the 1880s.

Ground penetrating radar (GPR) is a technique where radar waves are directed into the ground and bounce back, at different velocities through different materials, allowing us to discern different geologic layers and their thicknesses below the ground. GPR revealed deep kettle depressions, now bowls of peat, under the cranberries.

By design, this “black gold,” 80-90% organic matter, was being scooped up to the surface and mixed with the sand. Organic matter holds more water for longer periods of time than mineral soil, holds onto nutrients, hosts helpful microorganisms, and is a key component to wetland resilience. This peat also holds the historical wetland plant seedbank we hope will come springing back to life in 2021.

As surface earthwork progresses across the site, what we notice most dramatically is that the surface of the site is wet, which is ingredient No. 1 for wetlands: a stable, continuous source of water to support wetland plants, soils and fauna.

It was incredible and exciting to see how quickly we were able to capture more water in this future wetland — one of the ecosystems that provide a cool, wet respite for aquatic creatures when climate gets toasty. But this is really wet. Like 50% water-on-the-surface-of-the-ground wet. It’s hard to overstate this — especially since as this water was bursting to the surface, Plymouth County was designated as being in Severe (Drought Stage 2, or D2) to Extreme (D3) Drought from Sept. 30 and into October!

There are many ways to classify droughts, all of which stem from a lack of precipitation (meteorological drought). Massachusetts has typically benefitted from diverse moisture streams at different times of year that provide roughly evenly distributed precipitation throughout the year.

Depending on how long things are “abnormally dry” from lower than average rainfall, we fall into a drought. If it is very hot while also dry, soils become dry and plants experience moisture stress. If this timing and duration interferes with cultivation, it is classified as an agricultural drought.

Over still longer periods of sustained dry conditions, streams may have lower than average flows, and water levels in reservoirs and groundwater wells may decrease; this is a hydrological drought, which takes longer to recover from. Climate scientists also designate socioeconomic drought, when supply and demand of traded goods are affected, potentially resulting in climate refugees and broader political destabilization.

Despite an abundance of regular rainfall, and tendency toward increased precipitation (as well as more intense storms) with climate change, Massachusetts still experiences droughts. Readers may recall the relatively recent agricultural drought in 2016. The most severe was a full hydrological drought in 1965-66, and it took another 7-10 years for groundwater levels to recover.

They won’t happen every year, but we can expect more droughts in our future. Our farmers can help guard against drought by increasing the organic content of soils (which store more moisture as well as sequestering carbon and generally increasing crop yields). And we can set aside a few more cold, wet, soggy refuges for wildlife, where it is no longer profitable to grow cranberries — even in a drought.

Christine Hatch is research-extension liaison for the Center for Agriculture, Food and the Environment; and extension associate professor of Water Resources and Climate Change in the Department of Geosciences at University of Massachusetts Amherst. In her research, she uses temperature to track the movement of water in hydrogeologic systems.