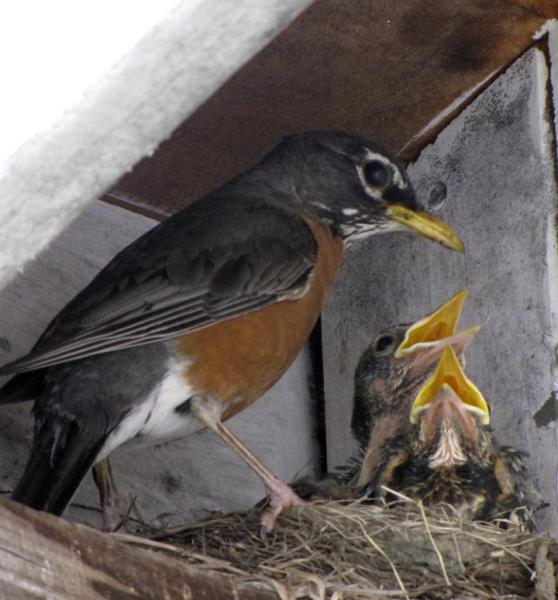 REBECCA REID It is estimated that there are at least 54,000 robines in Hampshire County, the figure, however, could be much higher depending on which method of calculating the population is used.

The American robin is one of the most familiar and common birds; have you ever wondered just how common they are here in Hampshire County?

This kind of question is asked by casual observers curious about backyard birds, by population ecologists investigating complex dynamics that influence those numbers, and by conservation biologists concerned with which species might need intervention to prevent serious population declines.

The answers, even for a common, relatively well-studied species, can be difficult to get.

Previous estimates can help. A group of biologists working with the bird conservation group Partners in Flight have made systematic estimates of bird population sizes, including many by state. For Massachusetts, the estimate is 770,000 American robins. With Hampshire County having about 7 percent of the commonwealth’s land area, the state-wide estimate translates to about 54,000 robins, or about 27,000 pairs, in the county.
The Massachusetts estimate is based on many assumptions that go into converting incomplete data into population numbers. The county estimate incorporates the further assumption that the county density of this species is the same as the state-wide average. Nonetheless, I think that most biologists familiar with the species would consider these numbers reasonable approximations.

Another approach produces a much higher estimate.

An average of several reported American robin territory sizes gives a density of about four breeding territories per hectare, suggesting about 544,000 pairs, over a million robins, in Hampshire County. Studies of territory size, though, are done in habitats where the species is relatively common, and Hampshire County includes corn fields with no robins and extensive forests where the species breeds at very low densities. This estimate is thus undoubtedly way too high; a habitat breakdown of the county and data on average density per habitat type, both natural and human-influenced, would be needed to make the needed adjustments.

The average American robin weighs about 76.5 grams, so 54,000 robins translates to about 4.5 American tons of robins in Hampshire County. With about 8.3 grams per egg, about 3.4 eggs per nest, and a pair completing on average about 1.9 nests per season, the female robins in this county lay about 1½ tons of eggs each year (based again on the lower estimate of population size).

Of course, predation, weather and disease prevent most of those eggs from becoming adults, as shown by the fact that our lawns are not blanketed with robins.

There are better data for trends than for absolute population sizes.

The volunteers of the federal Breeding Bird Survey have been counting birds at points around the United States and southern Canada for half a century. The data for American robins in Massachusetts indicate that today we seem to have about a third fewer robins in the commonwealth than we did five decades ago.

I say “seem” because there are caveats that need to be considered in interpreting this data set. For example, because the counts are conducted from roadsides they might not be entirely accurate in estimating populations trends in habitats away from roads.

The apparent decline in Massachusetts robins is similar to that seen across the species’s range, but some parts of North America have shown sharp declines and others have had increases in this species. The moderate decrease in robin numbers contrasts with stronger trends in two other familiar members of the same (thrush) family of birds. Over the past half-century eastern bluebird numbers in Massachusetts have approximately doubled, mirroring a range-wide trend, while wood thrushes seem to be only about 20 percent as common here now as they were in the 1960s, reflecting widespread decline.

The early winter Christmas Bird Counts can supplement information from breeding bird surveys, but in the case of the American robin the winter data are less helpful.

Because non-breeding robins gather in huge roosts that sometimes change location, there is a lot of fluctuation in winter counts. Over the past five years of available data, Christmas Bird Counts show continent-wide robin numbers increasing six-fold, decreasing by six-fold, tripling, and then dropping by half. These numbers probably are not accurate representations of population changes, but rather of the detectability of large concentrations of robins. For many other species, though, this effort of tens of thousands of observers provides more useful information.

Survey techniques can sometimes be improved. The Amherst breeding bird survey, a quarter-century old one-town effort modeled on the federal Breeding Bird Survey, has recently modified procedures to allow its data to be much more useful for estimating both trends and absolute population size, for example, by keeping separate track of birds first detected within 50 meters of an observer and those first detected beyond that circle. Small changes in methodology can make the volunteer work in these counts ever more valuable for monitoring bird populations.

Many of the numbers are readily available on websites where you can explore Partners in Flight population estimates (http://rmbo.org/pifpopestimates/Database.aspx ), Breeding Bird Survey data (http://www.mbr-pwrc.usgs.gov/bbs/bbs.html ), and Christmas Bird Count data (http://netapp.audubon.org/cbcobservation/ ).