Editor’s note: This is the second of two parts exploring the migration of Atlantic salmon. The first part ran Saturday, July 23, 2021.

Meskouamegou, the Atlantic salmon, hatched high in the Kwinitekw (Connecticut) River watershed in 1600, had come from a genetic strain that had evolved for more than 10,000 years, specifically adapted to the ecosystem of the Kwinitekw and its tributaries.  Connecticut River salmon had to have extraordinary endurance to migrate 3,000 and more miles, and had to time their spring migration early to avoid warm water and predators. 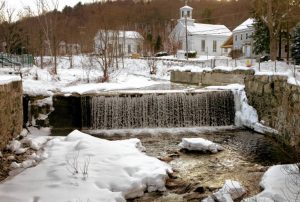 Snow and ice surround the Ballou Dam, in Becket, Mass., Monday, Dec. 12, 2005. The dam, about 134 miles west of Boston, is to be dismantled in the summer of 2006, eliminating a barrier to Atlantic salmon migration. (AP Photo/Steven Senne)

The Kwinitekw strain is gone, extinguished in about 1800. What happened?

The short answer is dams. Seventeenth-century English colonists required dams to run the mills that ground grain into meal, sawed timber into boards, and pounded homespun wool into cloth. Mills need dams for measured water flows, and colonists built hundreds of dams on scores of Kwinitekw tributaries in the last 70 years of the 17th century.

Dams spelled the end of migratory fish passage in many streams from Northampton south through the Connecticut colony. Salmon could no longer get to the spawning gravel of their home streams and they will not spawn without the proper gravel beds, cool temperatures, swift current, and clean water that support their eggs and fry. 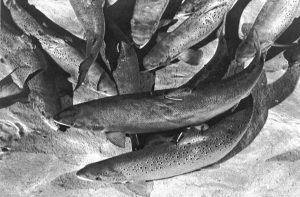 With their dorsal fins tagged for later identification, salmon swim in a pool at the Berkshire National Fish Hatchery at Monterey, Mass., July 22, 1981. Sufficiently developed fish are placed in the Connecticut River where the will hopefully return to spawn after their migration to the Atlantic Ocean. (AP Photo)

Beginning about 1640, the English built small dams on tributary streams from the Lieutenant River, near the mouth of the Kwinitekw, to the Mill River in Springfield. Then came dams on the Eightmile, Salmon, Farmington, Chicopee and Westfield rivers, followed by more on the three Mill Rivers of Northampton, Hadley and Hatfield in the 1650s.

Hundreds of miles of spawning runs were gone by 1700 and thousands by 1800. Indigenous and colonial landowners began filing scores of “nuisance” legal challenges against dam owners, and, as the number of salmon and other migratory fish began to decline, colonial and town governments issued laws to prevent dams from harming fish runs. The legislation failed due to lack of enforcement.

By the time of the American Revolution, access to spawning grounds came too late to save many migratory fish runs south of Deerfield, but almost the whole watershed north of Massachusetts remained open. Huge runs of salmon, shad, lamprey, herring, sturgeon and eels continued to surge throughout the 18th century. In 1766, for example, Thomas Harvey of East Haddam netted 3,000 shad in one haul and 23,000 in total that year. 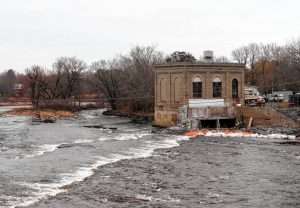 This Thursday, Nov. 17, 2016 photo shows the decommissioned powerhouse for a hydroelectric dam on the St. Regis River in Hogansburg, N.Y. A century after the first commercial dam was built on the St. Regis River, blocking the spawning runs of salmon and sturgeon, the river once central to the traditional culture of the Mohawk Tribe along New York’s northern border is flowing freely again. (AP Photo/Mike Groll)

Northampton’s great diarist and journalist, Sylvester Judd, wrote a story of two old men reminiscing about fishing at Patucket (South Hadley Falls) in the late 18th century when “the river seemed to be full of shad at times in some places, and in crossing it, the oars often struck shad.”

Salmon were far fewer in number than shad, and one of Judd’s storytellers recounted that he “had never known a salmon taken at the falls that weighed above 30 pounds; some weighed 20, and many from 6 to 10 pounds.”

Following the onset of the Industrial Revolution and simultaneous with the American Revolution came the completion of a dam at Peskeomskut (Turners Falls) in 1798. By 1800, the Connecticut River strain of Atlantic salmon was effectively dead, save a very few that survived into the first decade of the 19th century. More than 10,000 years of evolutionary history had been extinguished.

The Industrial Revolution spread throughout the Connecticut River’s 11,000-square-mile watershed. Thousands of dams were built on hundreds of streams — more than 400 on the Farmington River and its tributaries alone. Pollution earned the river the sobriquet “America’s best landscaped sewer.” 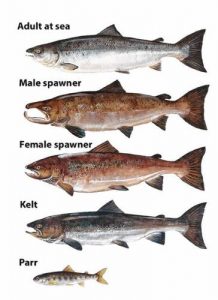 Yet despite the disastrous state of the rivers and the unregulated taking of fish, small runs of herring, shad, lamprey, and eels persisted below Turners Falls into the mid-20th century, when modern migratory fish restoration began.

Young fisheries biologists began the modern effort to restore salmon in 1967. Over the next 40 years, they developed complex techniques to address the questions of salmon genetics, hatchery and release protocols, and fish passage, recognizing that different species require different types of ladders, lifts and elevators.

They did all this while fending off budget cuts and galvanizing public support through such programs as “salmon-in-schools” in which local students raise salmon from eggs to fry to smolt that they stock in local streams. State agencies from Vermont, New Hampshire, Massachusetts and Connecticut joined with nonprofit groups, such as the Connecticut River Conservancy and American Rivers, to help remove dams and improve water quality.

The number of Atlantic salmon continued to decline into the 21st century, and the federal government killed the budget for salmon restoration in 2013. Two years later, three spawning beds were discovered in the Farmington watershed to great public acclaim, but, as retired Connecticut state fisheries biologist Steve Gephard said at the time, “Everybody wants to make this into this wonderful recovery story, this story of rebirth, and it’s not.” 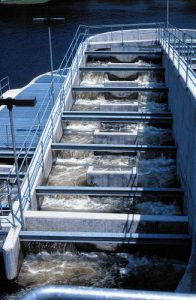 Is it the death knell?

At the southern edge of their range, Atlantic salmon are deeply endangered. Numbers are drastically low in the Maine and Canadian Maritime rivers, and in Europe, 80% of the salmon returning to the Loire River in France are diseased. Of the many possible causes, global warming is by far the most likely culprit. Currents in the North Atlantic are in flux, sending forage fish into different parts of the ocean with their salmon predators trying to find them. Food chains are problematic and scientific data haven’t yet provided answers.

We are all in the climate change maelstrom. Those same young people who were devoting their lives to restoring fisheries in restoration efforts are still active. They’re old men now, but their passion and their students carry all of us forward. None of us will give up!

Please check out this appendix for additional information.

John Sinton is co-moderator of the Mill River Greenway Initiative, honorary trustee of the Connecticut River Conservancy, author of “Devil’s Den to Lickingwater: The Mill River Through Landscape and History” and co-author of “The Connecticut River Boating Guide.” He is grateful to Steve Gephard and Boyd Kynard for their corrections. All the Native place names are in Abenaki. A simple Abenaki pronunciation guide can be found here. Thanks also to Marge Bruchac, who gave me a small window into the Abenaki language.

My deep thanks for their unquenchable fire to restore our fisheries go to Ken Sprankle of the Connecticut River Atlantic Salmon Commission, Steve Gephard of the Connecticut Department of Energy and Environmental Protection (ret.) and Boyd Kynard of UMass and the BK Riverfish company.