By Chris Volonte For the Gazette

Moving through New England in a wave each fall is a petite predator that might be one of the most frequently overlooked birds in Massachusetts.

Measuring 8 inches long and weighing less than two tennis balls, northern saw-whet owls breed in southern Canada and the northern U.S., and at high elevations such as the Appalachians. They have large gnomelike heads, big eyes, soft feathers and a tendency to sit tamely when a person is near.

They’re nocturnal, inconspicuous and — if you’re lucky enough to see one up close — impossibly cute.

The appeal of saw-whets goes far beyond their beguiling appearance. Perhaps most fascinating, they’re an owl that migrates. And their migration behavior may bode well for their survival in the face of climate change. 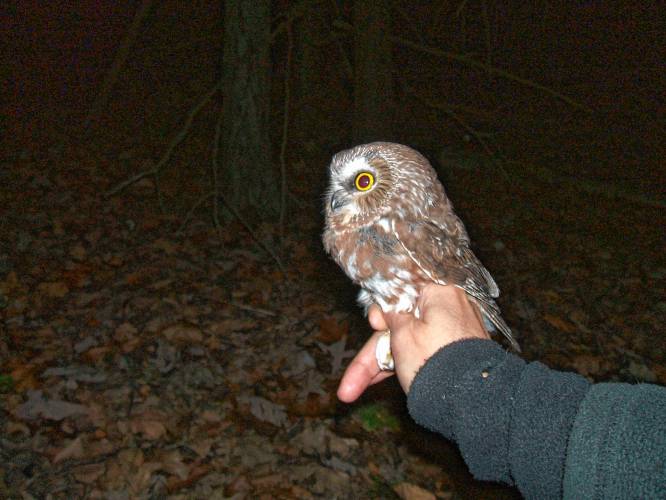 The northern saw-whet owl is one of the smallest owl species in North America, with a migration behavior that regularly brings the species through our region and may enable it to better adapt to a changing climate. KESTREL LAND TRUST

When we think of birds that migrate, we likely picture the colorful songbirds that arrive each spring, such as orioles and thrushes. We might also think of broad-winged hawks and other birds of prey rising on thermals over mountain ridges. Few of us, however, imagine a multitude of diminutive owls flying by night each year between Canada and the southernmost U.S. states.

We’re not alone. Nineteenth-century ornithologists considered saw-whets year-round residents in the northern U.S. Then, in 1906, the owls were discovered among migrating songbirds that had perished in an autumn storm over Lake Huron. Today, we recognize that substantial numbers of saw-whet owls move south each autumn.

Local banding efforts, including a recent pilot project by Kestrel Land Trust at its new home on the Mount Holyoke Range, have shown that some saw-whets travel through our region.

Their migratory behavior creates an opportunity to study the secretive saw-whet. Banding birds — a state and federally regulated activity of briefly catching and fitting birds with uniquely numbered ID bracelets on their legs — is a wildlife tagging technique well suited to studying birds that predictably migrate. By setting up at consistent locations and times each year, researchers amass data that helps reveal species’ distributions, movements, relative numbers and annual production. All this information is used to help conserve and manage species.

One example of sharing this data came in 2013, when a young female owl we banded in Belchertown was found by another bird-bander in Virginia. In 25 days, this tiny traveler had flown more than 500 miles, clocking an average speed of 20 miles per day.

Early saw-whet banding efforts yielded little data until 1986, when banders in Wisconsin tried broadcasting the male’s advertising call, an incessant “toot” that may be the source of the owl’s name (historically it’s reported to sound like sharpening a saw with a whetstone).

The technique worked, and tens of thousands of saw-whet owls have been banded since, creating an extensive data set at the U.S. Geological Survey’s Bird Banding Laboratory that enables us to examine the owls’ movement patterns on a large scale. 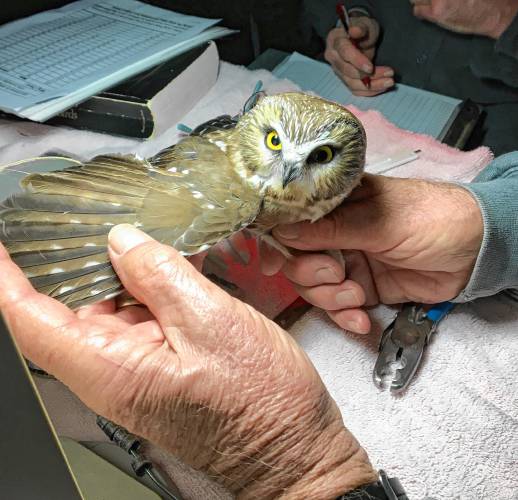 Conservationists are learning more about saw-whet owls through a banding and data collection process conducted by certified banders. This was one of 15 owls banded in November at Kestrel Land Trust’s Amherst headquarters on the Mount Holyoke Range. KESTREL LAND TRUST

What have we learned? If we think of migration behavior on a continuum, saw-whet owls fall somewhere in the middle.

At one end are our familiar neotropical songbirds, whose movements between tropical winter homes and temperate breeding sites are keyed to historically reliable food resources such as insect hatches. While recent studies suggest that climate change is beginning to disrupt their established patterns, these birds have a long history of consistent migration behavior: predictable timing, regular routes and a tendency to return to the same breeding sites every year. They’re also “complete” migrants in that the entire population (all ages and sexes) moves every year.

At the other end of the continuum are large northern owls such as the snowy and great gray owls. Rather than appearing in Massachusetts on a predictable basis, these charismatic owls make occasional non-breeding movements (“irruptions”) outside of their normal range, often in reaction to a collapse in populations of the prey they specialize in.

Irruptions can be considered a type of broad, flexible migration behavior in which birds respond to local conditions. Movement timing and routes are irregular, and birds may not be faithful to breeding sites. Similar behaviors are exhibited by “nomadic” birds that follow unpredictable food resources across the landscape, such as cone-seed-eating crossbills.

Saw-whet owls resemble neotropical songbirds in that they predictably migrate every year. However, much of their behavior tends toward the flexible end of the continuum. They don’t seem to have consistent migration routes, and they may be “partial” rather than “complete” migrants, with adult females and young birds following food resources south and males staying farther north.

They also exhibit nomadic behaviors such as breeding in different places and moving in response to food resources.

And yet, unlike food specialists like snowy owls and crossbills, saw-whet owls eat a range of prey: small mammals, insects, even birds. A broad menu means they’re unlikely to see their food source crash or disappear.

All in all, saw-whet owls may be among the “flexibility champs” of migrants. Their adaptability gives me hope for this species as shifting temperature and precipitation patterns disrupt the delicate synchronies between migrating birds and resources they need to survive.

In the face of climate change, birds that have evolved flexible behaviors may be better equipped to cope with the dynamic, unpredictable conditions that will characterize life on Earth for the foreseeable future.

The saw-whet owl is a small creature that most people don’t even know exists, and yet this deceptively adorable ball of fluff might turn out to be one of our most tenacious survivors.

Chris Volonte is stewardship director at Kestrel Land Trust, based in Amherst. She and local master bander Anthony Hill have banded northern saw-whet owls and American kestrels in our region since 2012. The migration continuum concept is adapted from a 2006 article by Ian Newton, “Advances in the Study of Irruptive Migration”. To see another column about saw-whets, visit “A Thing That Went Bump in the Night“.