Scientific fieldwork can be exciting, rewarding and great fun. It can also be a tough slog and include colossal mistakes. Often it’s all of the above, and more, as it was with this adventure.

Half a dozen volunteers were ready, on skis, and set to trek up to a remote creek in Nevada’s Great Basin region, pulling a couple hundred pounds of equipment on sleds, primed to finally make measurements of stream temperature after weeks of chipping through the ice and tucking 500 meters of fiber optic cable down onto the stream bed. Enthusiasm was palpable. We were about to journey from the dry lowlands, where the sagebrush and pinion pines were covered in only a few centimeters of snow, up into the canyon where snow depth was a meter-plus.

It was hard going. Skiing at an altitude of almost 3,000 meters is one thing, but uphill with a heavy, awkward sled is another matter entirely! A few more kilometers upstream, the snow and ice had cleared from the stream surface and we could see flowing water. The trout we saw there were young, maybe 1 to 3 years old, and were living in a short section of the creek that wasn’t frozen (as it was farther downstream), where there was sufficient water for them to swim in. A collaboration of four federal and state agencies had been raising a genetically pure native Bonneville cutthroat trout (Oncorhynchus clarkii utah) and they thought this creek might be a good candidate for restoration.

Soon we reached our destination: a footbridge about a kilometer downstream from where the stream begins as a groundwater spring. There, water emerges at just about 5-degrees Celsius almost all year around. Before the snow comes and acts as an insulating blanket over the stream, air temperatures on cold winter nights are double digits below freezing. Unless the relatively warmer groundwater sustains enough flowing water through the coldest part of winter to tide them over, small streams like these are vulnerable to freezing all the way to the bed, which spells disaster for small fish. 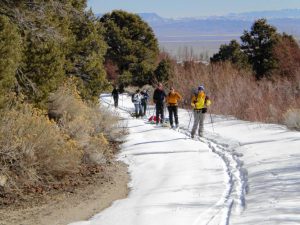 There we were, in an extremely unlikely place for fish to overwinter, kilometers above the desert valley floor, near a tiny trickle of stream a meter or two across, wondering if just maybe this habitat pocket was the “Goldilocks spot,” where everything depends on temperature. But we had to be sure before a project to re-introduce such a hard-won and still-rare native could even be thought about. So we turned to a technique called Distributed Temperature Sensing (DTS), which uses the light traveling through fiber-optic cables to infer temperature and happens to be well suited to very small streams. Wherever we place the cable, the glass inside is the thermometer; light traveling through it is altered in a predictable way by the temperature field around it, returning unique temperature information for every two meters over the entire length of cable we strung along the bed of the stream. After we made sure the cable was in the deepest part of the stream, for 500 meters or so, we stashed the rest of the cable on a giant spool under a tree until we could come back to connect it to the DTS unit — a computer with the laser and detectors — to measure temperature.

I tell my students that fieldwork is 75 percent problem solving and 25 percent making the measurements you set out to collect, and this time was no exception. Yet I made probably the worst unfixable mistake in fieldwork ever. When we pulled out the spool and went to connect the fiber optic cable to the DTS unit, I saw that the fragile glass fibers had been severed. Without light traveling through the fibers, there would be no measurement, and no easily reached hardware store would carry the arc-fusion welder needed to fix it. Game over. Note to self: belt and suspenders, every time. 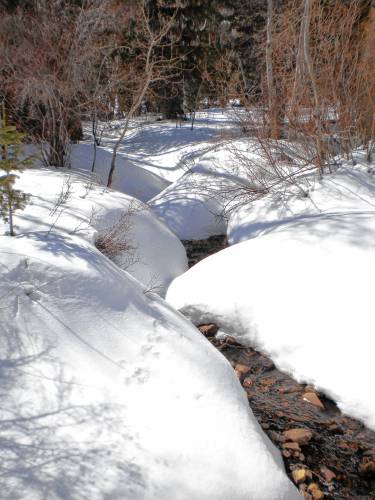 There was good news: We did get our measurements on a later expedition. Happily, we concluded that the warm thermal microenvironment generated by the relatively warmer groundwater would provide enough habitat for a fish nursery in this creek, and there was plenty of water for them all year around. Our arduous efforts had paid off!

I also learned some intriguing history about this fish. Some of the genetically pure Bonneville cutthroat trout in this restoration project were found in a short, steep, inhospitable stream on the western side of the Snake Range with no connection to the relatively water-rich east side where we were. It turns out that in the 1880s, prospectors had dug a very ambitious ditch all the way around the mountain to bring the eastern water west toward their placer mining operations, and at least a few curious fish must have swum all the way to the other side! While the east-side fish had long since been displaced by brook and rainbow trout, a few of the ditch adventurers persisted on the west side, long after the ditch dried up. Perhaps soon, owing to a perfect pocket of just enough water at just the right temperature, some of the more curious native fish may find their way back to their new old home, many, many generations after they left it.

Dr. Christine Hatch is Research-Extension Liaison for the Center for Agriculture, Food and the Environment, and Extension Associate Professor of Water Resources and Climate Change in the Department of Geosciences at University of Massachusetts Amherst. In her research, she uses temperature to track the movement of water in hydrogeologic systems.