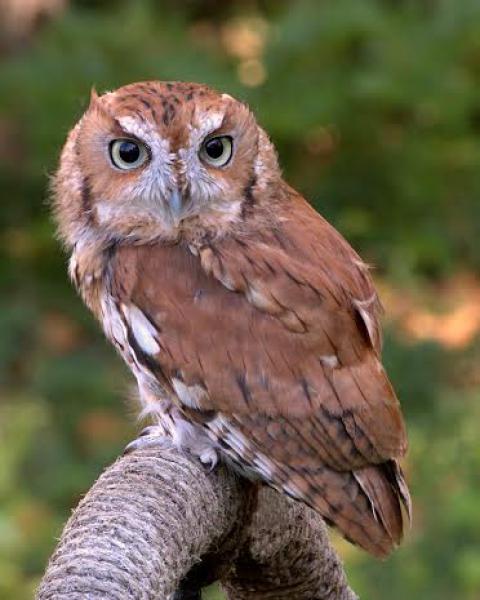 I like to go for a run in the mornings before I get ready for work. I often leave the house around 5:30 a.m. and part of the year it’s still dark. The other morning, as I ran past Garfield Street in Greenfield, I stopped short at a quiet sound from the side street — a gentle, quavering whistle, descending in pitch. It was an Eastern screech owl — right in a residential neighborhood! I just stood there listening in the predawn quiet, flooded with memories of other screech owls I have heard and seen.

Screech owls are one of our smallest owls, at most only 10 inches in height and weighing in at under 9 ounces. They roost and nest in tree cavities. They eat insects, rodents and occasionally small birds — all available in Greenfield’s leafier environs.

My favorite screech owl memory dates back to 1975 when I was a counselor at a summer nature day camp. The camp held an overnight once every two weeks and each staff member led an evening program for a group of campers. One evening, I gathered a group of six for an owl walk. We hiked over to a red pine forest on the other side of a nearby wildlife sanctuary. It was getting quite dark by the time we reached the trees. We sat together in a circle under a 30-foot pine near the edge of the forest and talked quietly about owls and especially screech owls — how special they are and how they sometimes answer when one imitates their call.

After we sat quietly for a few minutes, listening to the small noises of the forest and the distant traffic sounds, I let loose with my version of a screech call — that descending, quavering whistle. Almost instantly came an answering whistle from the tree, literally right above our heads. We were all electrified and paralyzed with excitement, listening to the sound. A few minutes later I responded with another whistle but got no answer. I guessed that the owl could distinguish my imitation from the real thing and flew off. We never heard any sound of wings or flight. The kids were so excited and couldn’t wait to get back to camp to tell everyone.

I had never successfully called a screech before, but I learned that it isn’t all that difficult to learn the bird’s call. Listen to a recording and practice until you have worked out a good approximation. You’ll note that there are two different calls, one a descending, whinnying tremolo, the other a soft, purring trill. Both calls last three to five seconds in duration. They are both quiet and a bit mysterious, maybe even eerie, but not at all loud or frightening as the name suggests. The closest I’ve been able to get to imitating the calls is to whistle and add a quaver in the note. I make my best call with a gob of spit in the back of my throat and then whistling through the saliva to get the quavering quality. (I think it’s much more of an accomplishment to imitate the call oneself than to play a recorded one.) When you think you have mastered the call, on the next still, warm evening, after dark, go out to your favorite patch of woods and try out the quaver call.

Maybe a screech owl will fly to the tree above you and answer.

Keep in mind that birds call for territorial defense and mate attraction. Our human calls are interfering in their social behavior, and probably increasing their stress level, so don’t make a regular habit of it. But I think it’s OK to do it once, just for the experience.

Ted Watt is an educator/naturalist at the Hitchcock Center for the Environment. To hear the Eastern screech owl’s calls, visit www.allaboutbirds.org/guide/Eastern_Screech-Owl/sounds.