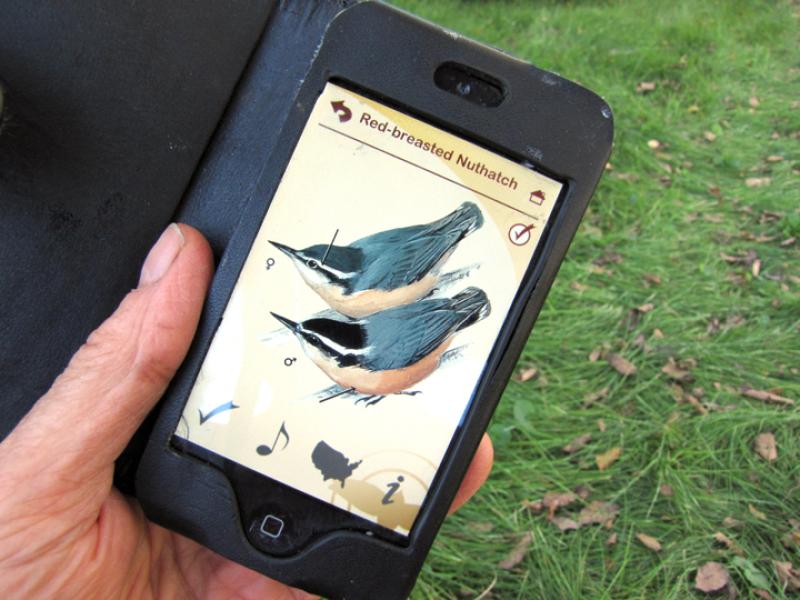 “Maybe we should just go home, and try to find it another time,” I suggested to my partner Matt. It was an April evening, and daylight had all but disappeared. We had been wandering around a meadow in Amherst for over an hour, hoping for a sign of an American woodcock. Neither of us had ever witnessed this fascinating bird or its famous mating flight display. We had been tipped off that it could be found in this particular meadow after sunset. But after what felt like ages, there had been no sign of it.

We were just about ready to call it quits when Matt suggested, “What if I played the sound of it on my Droid? Do you think that would attract it?” I was skeptical. Matt had just gotten his first smartphone recently, and I was feeling resistant toward it; do we really need the Internet at our fingertips at all times? But my eagerness to see the woodcock display got the better of me, so I agreed to try it. Right there, Matt connected to YouTube and found a video of the bird with sound. Before long, we were hearing the distinctive “PEEENT” of the woodcock sounding through the phone’s speakers.

I had to admit it was good to be reminded of what we were supposed to be listening for, because I was beginning to doubt myself. Then, less than a minute later came “PEEENT” from the meadow! A woodcock was calling from somewhere nearby. We scanned the darkening sky, and the bird appeared, ascending into the air in huge circles. We couldn’t see much more than its silhouette in such low light, but its wild flight was distinct, and its call unmistakable.

I left the meadow that evening of two minds; I was joyful that I had witnessed this fascinating display of nature, and I felt strange that it may have been facilitated by something decidedly un-naturelike: a cellphone. Would the woodcock have started calling without a little electronic prodding? Was it even the phone that got the woodcock started on its evening display in the first place? (I don’t know for sure, but it certainly seemed that way.) Furthermore, was it ethical? The American Birding Association urges birders to “avoid stressing birds” and “limit the use of recordings or other methods of attracting birds, and never use such methods in heavily birded areas, or attracting any species that is Threatened, Endangered, or of Special Concern, or is rare in your local area.” The American woodcock isn’t in any of those categories, but I still have my doubts.

Despite my ambivalence, there’s no doubt that the Internet has a wealth of resources for us nature lovers. Whether we want to access it from the field on our phones or tablets, or at home at the computer, the Internet makes it easy for us to learn about nature. Innumerable apps have popped up for just about anything you need on your nature walk. Want to know what bird is singing? Find a good hiking trail nearby? Identify the animal track in your path? There’s an app for that. Carrying a lightweight device such as a phone or tablet can be easier than toting your favorite field guides with you on your hike; for example, iBird, the most popular birding app, boasts the contents of “fourteen large field guides” including profiles of every North American bird, range maps, recordings of songs and calls, hand-drawn illustrations and more. It’s hard to argue with the convenience of that. Furthermore, many nature apps enable you to map your findings with GPS so others can find them too.

When I spot a “life bird” or rare flower, sharing my discovery with others is not only one of my greatest delights but also the main way I get the new knowledge to stick. Last year my knowledge of New England wildflowers grew exponentially with Facebook, of all things. After viewing my plant-loving friends’ flower photos on Facebook, I started recognizing some of the same flowers blooming in the woods and fields on my own walks. I too began to photograph the wildflowers I saw outside and post them on Facebook afterwards. I labeled the ones I knew, and asked for help with the ones I didn’t. My friends as far away as California saw my photos and commented with suggestions of family, genus and species. As I learned more I commented on their photos with my suggestions too. I’m a visual learner, so the images I saw on Facebook stayed with me and my learning solidified.

As amazing as these apps are though, there are some observation skills that I can’t hone with a screen in front of my face. And despite the wealth of information on the Internet, it can’t replace a real-life experienced naturalist describing where to look for bear sign, or telling a story about what happened when he got too close to a goshawk nest. So as much as I use “screen time” to learn cool new things about insects, trees and flowers, I try to spend as much screen-free “green time” in nature as possible.

Katie Koerten is an environmental educator at the Hitchcock Center for the Environment. The American Birding Association’s Code of Ethics can be found here.