Seeing a nocturnal hunter by day 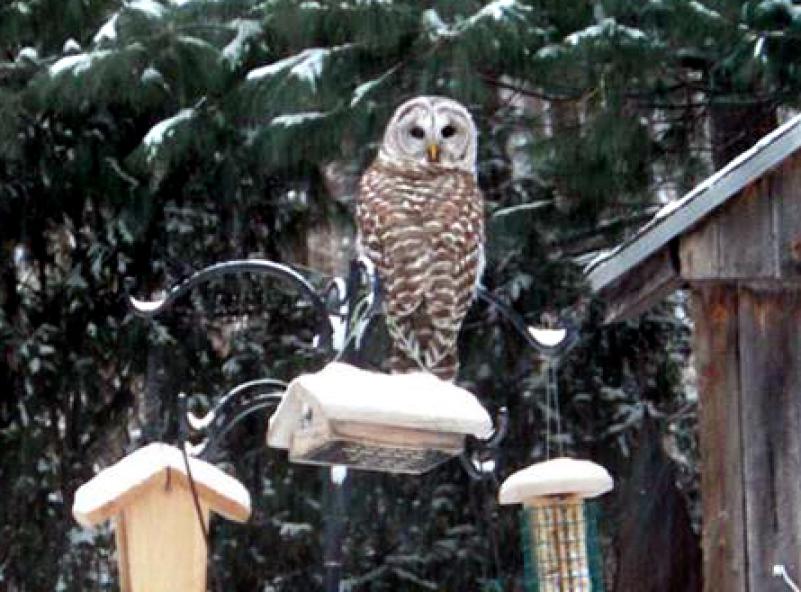 PHOTO BY JAANA CUTSON A barred owl in an Amherst backyard.

Is the barred owl a common bird here in western Massachusetts? The answer depends on how the word “common” is understood.

The barred owl is nocturnal, well-camouflaged and, like most nocturnal birds, seldom seen by people as it rests quietly in daylight; it is thus visually very uncommon. This species is quite vocal during the warmer half of the year, and its distinctive barking hoots, especially the series of hoots that gives it the folk name of “eight-hooter,” are often heard by those who live in forested areas; it is thus acoustically common for some people.

From a numerical perspective, the barred owl is quite common indeed, one of the most numerous nesting birds of prey in this region, although it is largely confined to areas with extensive woodlands. This owl is thus biologically common, an important forest predator. While the biological significance of the barred owl is similar throughout the year, and its vocalizations are more frequent in warmer months, the predator’s visual commonness increases in winter.

The barred owl is seen in daytime more often than other nocturnal owls. There are many reasons why an owl might be seen in daylight. An owl that hits a car is sometimes stunned and may sit “tamely” while humans are thrilled to observe such a bird at close range. Three decades ago, I was one of many people who had the opportunity to watch such a barred owl in Amherst before it was captured and taken to a wildlife rehabilitation center.

Sometimes a resting owl is discovered by other birds that harass the predator and may succeed in inducing it to fly. Such harassment or “mobbing” can alert people to an otherwise well-hidden owl, and a flying owl with a flock of noisy crows chasing is obvious even to a casual observer.

On a March day a few years ago I saw a barred owl fly across the Massachusetts Turnpike around noon and later the same day saw one pounce on a clump of dirt that I had thrown onto my icy driveway to increase traction. On another winter day I saw different hunting barred owls in the morning in Belchertown and in the afternoon in Ware. Once, while my wife and I were driving in Amherst, we spotted a bird in flight among the leafless trees. I thought at first that the bird was a hawk, but when we stopped where the bird landed we could see that it was a barred owl sitting on a branch about 10 feet from the car. The owl sat scanning the ground, dropped to the forest floor a few feet from us and returned to its branch with a foot-full of leaves. It then picked a mouse out of the leaves and dropped the mouse into its mouth.

Why are barred owls seen more often in winter than at other times of the year?

Decreased availability of food prompts hungry barred owls to hunt by day. At this time of year small mammal populations are low, and in winters with persistent snow or heavy icing prey can be relatively difficult for barred owls to find. Winters that follow years with poor crops of acorns and similar tree nuts are especially hard on small mammals and thus on the owls.

Although at an individual level, as my wife and I observed, an owl kills a mouse, at a population level the mice control the owls. Availability of small mammals affects the size of an owl population and the hunting behavior of individual owls. Complex interactions among oak trees, mice and snowfall combine to influence whether human observers have the opportunity to see barred owls on the hunt. It is always a good time to be out in the woods and to keep one’s eyes open, but this time of year is an especially good time to glimpse this nocturnal hunter hunting by day.

David Spector is a former board president of the Hitchcock Center for the Environment and teaches biology at Central Connecticut State University. He will be speaking about birds in literature at the Hitchcock Center on Tuesday, March 4. Contact the center at 256-6006 for more information or to register.

3 responses to “Seeing a nocturnal hunter by day”