Singing the bluets: Counting on a spring wildflower 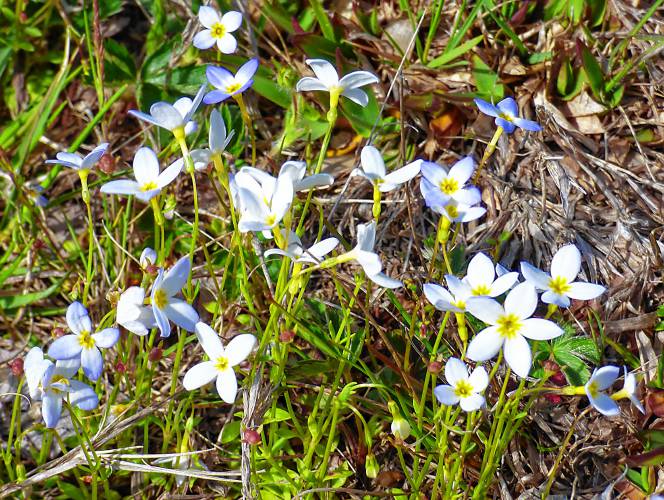 Bluets show variation, commonly in color and more rarely in petal number. Can you pick out the five-petaled flower in this photograph? Can you find a five-petaled bluet among hundreds on a lawn? David Spector

At this time of year I count on one of my favorite spring wildflowers, the little bluet (Houstonia caerulea), for a lovely show. Depending on exact location, altitude and microclimate, anytime from early April (even late March after mild winters) to early May, I see lawns covered with a late “snow” of these flowers. A highlight of my commute is a lawn a few miles from my house that has ideal conditions for this species and is often covered with bloom before the flowers appear elsewhere.

I recognize these flowers by their size, up to about a half-inch across on plants growing only to about four inches tall, and their white to blue color — the name “bluets” well reflects the color and diminutive size. When I said that I count on this species, I meant it literally: At close range I note the four petals characteristic of the flower. Indeed, I am so familiar with four-petaled bluets, that the occasional three- or five-petaled flower (occurring less than one percent of the time) jumps out at me.

As a biologist, I wonder about the origin of variation in this plant. Much of the variation in flower color seems to have a genetic basis. Flowers on the same plant are similar in color, and the observation that flowers on adjacent plants often differ in color suggests that environment plays little role. Do the plants gain by having different flower colors?

Some organisms seem to benefit by color variation within a species, for example, by reducing the ease with which a predator recognizes a prey species. Such a mechanism seems unlikely for a flower with pollinators that recognize and visit flowers of the same species. The insects that visit bluets have different sensory sensibilities from those of humans, and variation in color apparent to us might not be important to animals using cues such as ultraviolet or polarized light reflectance or slight (to our noses) odors to find flowers.

Variation in petal number presents another puzzle. Three-petaled bluets often have an irregular appearance suggesting damage during flower development. A hungry insect, rodent or lawn mower damaging a developing flower bud might result in loss of a petal. Five-petaled bluets, though, often show no obvious sign of damage. What causes a flower bud to produce an extra, apparently normal petal?

I once found a five-petaled bluet with a tiny dot of discoloration on the flower base. Such a dot could indicate where an insect pierced a flower bud to lay her eggs. Perhaps the presence of an insect larva disrupted the normal development of flowers and induced the production of an extra petal. I then looked for sign of insect entry whenever I found a five-petaled bluet, but, unfortunately for my hypothesis, I didn’t find it.

I did find evidence of insect damage on many normal four-petaled bluets. Thus, there is no one-to-one correlation between insect damage and abnormal petal number.

Biologist Conrad Waddington pictured development — for example, the development of a flower from a bud — as a “landscape” of probabilities with several “valleys” (likely developmental outcomes) into which an organism could end up. In the case of bluets’ petal number, the deepest “valley” produces four petals, and it is separated from adjacent three- and five-petal “valleys” by “ridges” (less likely outcomes) that usually keep developing flowers funneled into their normal path. A cataclysm (from the perspective of a small flower that might include an insect nibble, an infection, or even a hard-hitting raindrop) might bump a flower bud from one “valley” to another.

With this landscape metaphor, evolution is a change in configuration of “ridges” that funnel a developing organism into one “valley” or another (e.g., into producing different numbers of petals).

Another interesting question these flowers pose to me is about how and what we see or miss. People notice different details. I don’t find four-leaved clovers, but I find five-petaled bluets. In 1960 the ecologist Luuk Tinbergen proposed the idea of a “search image” to explain why some individual predators specialize on particular prey types. A half-century earlier, naturalist John Burroughs more poetically described how different people see: “If we think birds, we shall see birds wherever we go; if we think arrowheads, as Thoreau did, we shall pick up arrowheads in every field. Some people have an eye for four-leaved clovers; they see them as they walk hastily over the turf, for they already have them in their eyes. . . . You must have the bird in your heart before you can find it in the bush.”

Based on some aspect of my experience, I have a search image for bluet petal number but not for clover leaflet number or, as Burroughs would say, I have the bluet but not the clover in my eye and heart as I look over a lawn with both plants.

The little bluet is a tiny plant, but, like every organism, it raises big questions of biology and inspires inquiry into topics as diverse as developmental biology and human perception.

David Spector is a former board president of the Hitchcock Center for the Environment and teaches biology at Central Connecticut State University in New Britain, Connecticut. As a scientist and science educator he will participate in the March for Science on Earth Day. For more information about little bluets see the New England Wild Flower Society site GoBotany.