Flecks of ice and birds.

Snowflakes here have an extra meaning: “Snowflake” is an old name for the bird that’s better known today as the snow bunting, one that we can see this time of year. This bird moves south for the winter from its arctic nesting range to relatively warm and sunny regions, including here in New England. 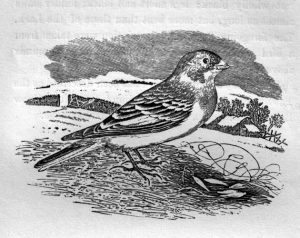 The snow bunting resembles a plump sparrow in size and shape. In winter here it appears coated with soft cinnamon fringes on its feathers, coloration that allows blending with the mud and dried vegetation of the open fields it frequents. In flight the large panels of white in the wings earn the name “snowflake” as flocks drift across the fields. As a snow bunting approaches its breeding season, the softly colored feather edges erode to reveal a striking black and white bird suited to the stark snow and rock landscape of its breeding range.

Breeding around the Arctic, the snow bunting is one of the northernmost nesting birds. Unlike most tundra breeders, the snow bunting nests not in open vegetation, but in rock crevices where eggs and nestlings are relatively protected from arctic foxes, ravens and other predators.

Snow buntings interact with humans in many ways. For instance, in his classic study of breeding snow buntings in Greenland, the Dutch biologist and Nobel laureate Niko Tinbergen describes birds returning to snow-covered landscapes feeding on the seeds of grasses around human settlements. The grasses at these settlements are fertilized by human and dog feces. The human communities rely heavily on fishing and hunting seals for their sustenance, so themarine food chain is the ultimate source of the nutrients found in the seeds that feed the birds. In addition, human-constructed buildings provide both nest sites and song perches for the buntings later in the breeding season. The snow buntings’ attraction to human settlements is similar to their use of northern seabird colonies, where cracks in cliff faces offer nest sites, and bird droppings feed the growth of the plants that supply seeds to the buntings.

In winter the snow buntings inhabit a variety of open habitats, including human-built landscapes like farm fields. Heavy snow that cover food sources on fields can bring these birds closer to human habitations in places like barnyards that provide open ground and seed. The illustration here is by the 18th-century English author and wood engraver Thomas Bewick, showing a snow bunting in a farmyard, attracted to seed scattered for it; it also shows the horse-hair nooses set near the seed to trap the plump bird for the farmer’s stew pot. 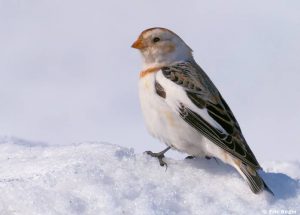 In recent decades the numbers of wintering snow buntings tallied on Christmas Bird Counts have declined sharply. At the moment, biologists don’t know the causes or significance of this decrease. Most snow buntings nest where birdwatchers and ornithologists are scarce to nonexistent, so there is little information to tell us whether breeding populations of the species are actually in decline. There are several possibilities to consider. For example, changes in human land use here on the birds’ wintering grounds or in their Arctic breeding range might explain a population decline.

A warming climate might be affecting the breeding biology of the snow bunting. (Some migratory species are currently experiencing loss of synchrony between their breeding times and the availability of preferred foods.)

Another possibility is that there hasn’t been a decline at all: Global warming could simply be leading the snow buntings to spend their winters a bit farther north in places where there are fewer people (or none) doing the Christmas counts. Much more information is needed to show if the snow bunting is indeed in danger of a serious population crash and, if so, the reason or reasons why.

Mid-winter is a good time to get out into open fields to look for these snow buntings and a chance to visit with visitors from the Arctic. They may occur as isolated individuals, mixed with horned larks or other open-country birds, or, most spectacularly, as flocks of dozens to hundreds of birds alternating between soft brown buntings on the ground and flashing “snowflakes” in flight.

One response to “Snowflakes with wings”