Spiders right at home with you

By Joshua Rose for the Gazette

The back door is their favorite.

Not that they avoid the front. I see a few there. The front is just too clean, bright and sunny. Not enough hiding places. Plus, we humans are always blundering through, destroying their webs.

So the front is home to species that don’t need big webs. The jumpers are the cutest and most popular spiders, with their big eyes and bright colors and dancing displays. Insects find them less cute, since the spider’s jumps often end with fangs in an insect’s back. Crab spiders are as brightly colored as wildflowers; this is not coincidence, but camouflage. When a pollinator visits a crab spider’s flower, its pollination days are over. The nursery-web spider stays out of sight all day, but at night looms near our porch light, legs spanning nearly two inches, pouncing on moths.

It’s cleaner indoors, but they’re here too, hunters without webs. Halfway upstairs lurks a parson spider, with markings resembling a parson’s tie, though reminding me instead of the “skip track” symbol on a video player. Instead of waiting in a web, it attacks and flings webbing upon a victim, often entangling its legs to prevent escape. In the corner of the bathroom lurks Euryopis funebris, which ambushes prey and throws silk over it to pin it to the floor.

Down into the basement. Since we clean less thoroughly here, the web-dwellers appear. This is the kingdom of the cellar spiders, family Pholcidae. Their little bodies are inconspicuous among the ridiculously long, creepy legs arcing all around, leading some to call them daddy longlegs” (also sometimes applied to non-spiders called harvestmen). Although humans cause many organisms to decline, the cellar spider flourishes, following us worldwide to lurk in our dark corners.

Finally, I step out that back door, into spider paradise. Webs everywhere, shielded from rain by our deck above, from wind by our house, from predators by the shadows. Corpses of innumerable victims clutter the webs. No orderly orb webs here; riots of threads scramble in every direction. I’ve photographed 20 species from 13 families here, and surely overlooked others. If Shelob or Aragog lived in Amherst, it would be here.

Most of the space is filled with chaotic cobwebs occupied by common house spiders. Overshadowing those are thick sheets with one corner crafted into a tunnel, each one home to a funnel-web weaver. The largest spiders back here, they spend most of their time squished into their funnel. No black widows live here — we once found one in our garage, a story I told in this column before — but there are several “false widows” frequently mistaken for the real thing.

An orchard spider, shaped and colored like a little watermelon with spindly legs and a creepy head, hangs near the light. A hammock spider, a filmy-dome spider, and a spotted orb-weaver all skulk nearby, but their distinctive webs are imperceptible amid the silken chaos. Another species of crab spider is here too, cement-gray in contrast to its flower-colored cousins out front. 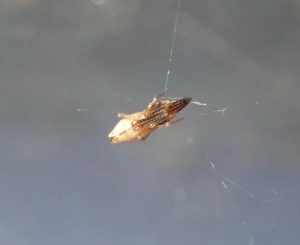 A dewdrop spider with its legs tucked in tightly, doing its best impression of something that a bigger spider already ate JOSHUA ROSE 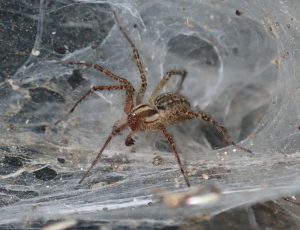 A funnel-web weaver emerging from his funnel (or, since this is a male, possibly from his mate’s funnel) JOSHUA ROSE 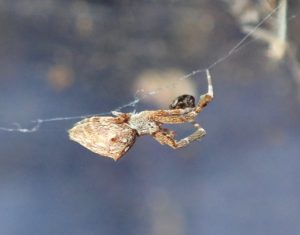 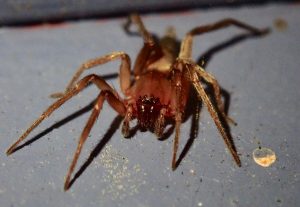 Elaver, a sac spider; included mostly because this was my best pic of a spider staring straight into the camera with an “I wonder what you’d taste like?” expression on its face. Which is pretty much the only expression spider faces ever make, except for jumping-spiders. I have many better pics of jumping-spiders staring straight into the camera, but they’re much too adorable for a Halloween column, so I’m saving them for the next one. JOSHUA ROSE 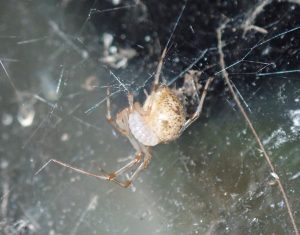 A spider with the parasitoid wasp larva attached to it. I have a bunch of photos of this; some are in a bit better focus or exposure, or show the spider’s face more, but in those the wasp larva is either smaller or more obstructed from view…. JOSHUA ROSE 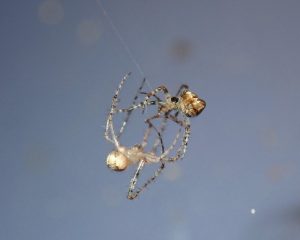 A spider death match: a Pirate Spider attempting to kill and eat a Trashline Orb-weaver. After I took a series of photos of this battle, the orb-weaver escaped. (Though I suppose, these being spiders, the Pirate might have already bitten its victim and then let it go, planning to track it down and eat it later after giving its venom time to take effect….) JOSHUA ROSE

Not all spiders get along. A pirate spider, a specialist in invading others’ webs to kill and eat the occupants, tangles in combat with a trashline orb-weaver; the prey escapes, this time. A harvestman is less fortunate, trapped by a cellar spider that ventured outdoors: one Daddy Longlegs eating another.

At first I overlook the little yellowish triangle hanging in one of the webs, thinking it another of the many silk-wrapped spider victims. Then eight legs unfold: a dewdrop spider. Dewdrops are kleptoparasites: They lurk in the webs of larger spiders, waiting for the hosts to paralyze and silk-wrap prey items that the dewdrops steal and smuggle off to eat.

More sinister parasites lurk here too. One of the house spiders has something on its back that looks more like a grub than a knapsack. This spider is doomed. The passenger will feed on the spider until grown enough to spin a cocoon and metamorphose into an ephialtine wasp. Only the spider’s empty husk will remain.

Next to the light bulb dwells our home’s strangest spider: Uloborus. Like the dewdrop spider, it masquerades as previously eaten prey. Most other spiders catch prey using a glue-like adhesive, but this beast spins thicker, non-adhesive silk, with many fine fibers that entangle the feet of victims. On top of that, Uloborus lacks venom. This might make the species seem less frightening at first, but in lieu of venom, Uloborus regurgitates digestive enzymes onto its captive, then slurps up its victim’s liquefied remains.

Humans often recite unsettling spider statistics. “A spider is within three feet of you.” That’s probably an exaggeration. “The Earth has over 130 spiders per square meter.” That’s an average over all land area; your living room has fewer. “We swallow 8 spiders per year in our sleep.” No one has ever obtained proof of a sleeping human swallowing even one spider; we eat spiders mostly as accidental ingredients in hot dogs and chocolate bars. On the other hand, “spiders live in 2/3 of bathrooms and ¾ of bedrooms” came from academic research that probably underestimated the numbers. And although some humans applaud spiders’ collectively eating over 400 million tons of insects and other prey per year, others note that this is more than twice the mass of all humanity. So be safe: Wish your home’s many spiders a happy Halloween!

Joshua Rose is a naturalist who lives in Amherst. He is a Hitchcock Center member, a board member of the Hampshire Bird Club and a contributing editor of the website bugguide.net; he regularly leads programs for local nature-oriented groups.