Seven years ago, I attended the annual meeting of the Dragonfly Society of the Americas — a mixed group of researchers, naturalists, and other dragonfly enthusiasts — in Delaware. There we heard that tiger spiketails (Cordulegaster erronea) were breeding in the northwestern corner of that state. Spiketails are large, distinctive dragonflies, black with bright yellow stripes and green eyes. Their namesake spike is an ovipositor, which the female jabs into stream beds in a sewing-machine-like motion to lay eggs. Many of us detoured on our way home to see them. This was the only time I had ever seen the species, which had never been recorded in Massachusetts — yet.

Two years after that, in August 2013, photographer Deb Tracy-Kral posted a picture of a dragonfly in Berkshire County. It was a tiger spiketail, the first ever found in Massachusetts! But, despite several attempts to find them, no others have been seen there since.

Then in June 2017, I was walking with my family to our local swimming hole. As we walked through the Echo Hill neighborhood of Amherst, I looked down and noticed a dragonfly lying on the pavement. It was barely moving, having probably collided with a car. 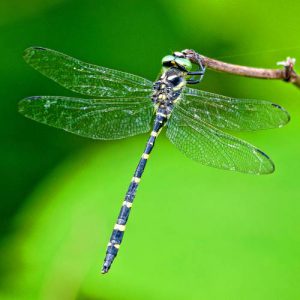 My surprise grew as I recognized the dragon as a spiketail; I’d seen a few in the neighborhood, but not many. Then I tried to figure out which species of spiketail it was. Massachusetts was known to have three of them, named for the yellow markings along their abdomens. The twin-spotted spiketail is named for its paired spots, each shaped vaguely like a semicircle. The delta-spotted spiketail is very similar except that its paired spots are more pointed, resembling the Greek letter delta. The least common, the arrowhead spiketail, has a row of single spots instead of paired; you can guess their shape. But this dragon matched none of those. Instead its tail featured a stripe wrapping almost completely around each segment. I remembered that meeting in Delaware and got really excited.

Spiketails are rarely seen. One reason is that the adults are ephemeral; while some dragonfly species appear during any month that air temperatures get warm enough, spiketails fly for two months or less. They spend the rest of the year as larvae — aquatic predators lurking under rocks or half-buried in sediment. Spiketail larvae often require two or three years to develop from egg to adult.

My tiger spiketail led to a question. Had I found a lone wanderer from some distant source, or did Amherst have an undetected breeding population? I found some promising habitat near Bayberry Lane Conservation Area, but saw no dragonflies at that time. Then, this past June, I noticed a spiketail flying over a lawn very near the spot of my original discovery, but it flew away before I could see which species it was. Nick Block, a dragonfly specialist at Stonehill College in Easton, Mass., visited on July 4 to take a look around; he saw what he was certain was another tiger, but could not catch it or get a photo.

I decided to bring in the big guns. As the new head of the Dragonfly Society’s northeast chapter,  my main responsibility is organizing its annual meeting. I had picked Ludlow as this year’s focal point, so adding a trip to Amherst was easy.

On August 4, after a rainy morning with little dragonfly activity, a group of us drove to Amherst. I led the group down Bayberry Lane, heading for the Bayberry Conservation Area, only to realize that the trailhead was on the next street over. But as we were turning around, someone yelled: A tiger spiketail was perched by the roadside!

After documenting that find, we found the correct street and followed the Robert Frost Trail into the woods, to the habitat I had identified last summer. Before long we spotted another tiger flying around. Then — the final confirmation — one member of our group sifted through some stream-bed sand and found a larva! This proved that the dragons were not just flying through; they were actually, definitely breeding here.

Tiger spiketails, a few short years ago, had never been found in Massachusetts. Now we know that they are not only present, but breeding here. Is this the only population? Unlikely; only a limited number of people in Massachusetts can identify any dragonfly species, much less spiketails, and those people are spread pretty thinly across the state. But thanks to our documentation of this population, people know to look for others, and are learning how to recognize both the species and its habitat. And the knowledge that a big, colorful, distinctive species like the tiger spiketail had been living unnoticed in a well-studied area like Amherst reminds us that we can make discoveries, even in our own backyards.

Joshua Rose is a naturalist who lives in Amherst. He is a Hitchcock Center member and a board member of the Hampshire Bird Club; he regularly leads programs for local nature-oriented groups. Josh would also like to thank Soheil Zendeh for the use of his photograph taken at the scene of the confirmatory visit to Bayberry Lane.