Storms, sprites and other sky oddities 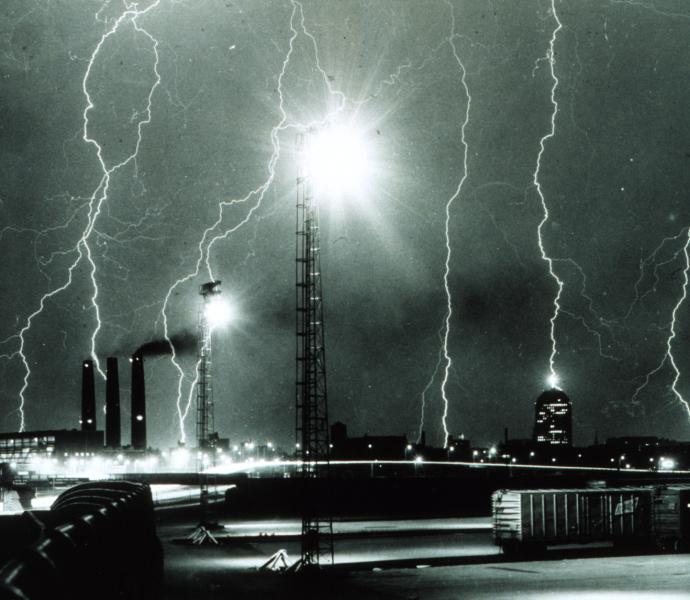 July is a time for fireworks, both man-made and natural.

To me, one of summer’s most exciting light shows is the thunderstorm, with its amazing lightning displays and the promise it brings of cooling rain. As I write this, an average of 2,000 thunderstorms are going on around the world, and one is actually barreling toward the Valley, roaring in from the Berkshires. My anticipation builds.

Thunderstorms quite literally appear out of thin air, that is, air masses of different densities and temperatures that collide with each other without mixing. As the sun heats up the Earth’s surface, the warming air near the ground becomes less dense as the excited molecules spread apart; it begins to rise, carrying lots of humid moisture with it. You can see this principle in action on a summer day as you walk upstairs from the cool, dense air in your basement to the hot, sultry air in your attic.

Big obstacles such as the Berkshire mountains also usher unstable warm air quickly to the upper atmosphere. There, it encounters much cooler temperatures and the water droplets it carries begin to condense, forming clouds. Typical thunderstorm clouds start out looking like huge heads of cauliflower or tall towers (appropriately called “towering cumulus”); when the cloud tops approach 40,000 feet and higher, they spread out laterally and take on the top-heavy shape of an anvil. When you see that kind of cloud on the horizon, it’s time for you to go indoors.

The drama inside the cloud escalates as ice particles crash into and knock electrons off each other, generating a build-up of unbalanced electrical charge. You can get your own sense of lightning on a dry day when your body transfers energy from friction (such as you get when you walk on a deep pile carpet in your slippers) to an oppositely charged object (the metal doorknob you touch), and you get a tiny static shock.

Most of the huge charge in a thundercloud is released as lightning within the cloud, especially at the beginning of a storm. But when a positively charged part of the cloud encounters the mostly negatively charged Earth, a bolt of lightning will strike the ground, followed by a return bolt to the cloud from the ground in just a fraction of a second.

A single bolt of lightning travels 100,000 miles per hour and packs a hair-raising punch of 30 million volts. Thunder is the sound made by the shock waves created by the enormous, heated electric discharge. Since sound travels slower than light, you’ll always see the lightning first, followed by its thunder boom. You can gauge how many miles away the storm is by counting the seconds between the lightning flash and the thunder clap and dividing that count by five.

Meanwhile, since nature abhors a vacuum, denser cool air rushes in underneath, causing the gusty winds that presage rain. As the cloud cools in the upper atmosphere, it cannot hold its moisture any longer and rain falls, accompanied by downdrafts of cool air. The storm then dissipates in strength and the world becomes placid again.

That’s your garden-variety thunderstorm, putting on the gorgeous (if occasionally scary) light show of chain lightning. But some storms produce really unusual types of electrical phenomena, known by colorful names such as sprites, ball lightning and St. Elmo’s fire.

Sprites are ephemeral flashes that occur high above powerful thunderstorms, between 30 and 50 miles above the Earth. Occurring only for a millisecond, they attain prodigious sizes — up to 20 miles tall and 30 miles wide, —displaying brilliant colors — scarlet, blue and violet. They take on bizarre shapes — some like carrots, or enormous columns, and even jellyfish with tendrils of light flowing toward Earth.

These high-altitude flashes are rarely seen from the ground, but the International Space Station has captured them frequently on film. Although they result from lightning activity, they are actually spheres of ionized air particles traveling rapidly down and up above the cumulous cloud, much as neon light flows in a sign or a fluorescent tube glows.

“Ball lightning” is the term given to a rare electrical discharge that is rounded rather than chain-like and that lasts much longer than a typical lightning strike, sometimes boring holes in the structures it hits. Its cause remains a mystery. Theories range from its being a core of vaporized silicon from soil, to being a tiny black hole.

Finally, and perhaps most poetically, is St. Elmo’s fire — a ghostly glow of bluish light emanating from cylindrical, pointed objects during electrical storms and, occasionally, volcanic eruptions. Named for St. Erasmus of Formia, the patron saint of sailors, it has been seen frequently on the tips of masts, but can light up radio towers, grass blades or even cattle horns.

In the charged atmosphere of storms, electrical fields coalesce around curved objects, ionizing (exciting) nearby air molecules and causing the nitrogen and oxygen in them to fluoresce.

So, next time you hear thunder approaching, get to a safe place (obviously), but somewhere you can watch and appreciate its flashy, humbling, electric beauty, preferably to a rousing soundtrack by John Philip Sousa or Beethoven.

Elizabeth Farnsworth is senior research ecologist at New England Wild Flower Society and an admitted weather geek. More information is available on thunderstorms and other phenomena.