When I fly, I get a window seat whenever I can. I press my face against the glass, camera ready, and spend the flight marveling at the shapes in the landscape, how the surfaces turn to art, how places I know from maps are transformed by the light and are so, so small.

I thrill to the way the light plays off rivers, and the discovery of what was once a river system, now dried, still leaving its branching pattern etched beneath the farms. I love thinking about the science of the landscape: why rivers were here, why rivers are the shapes they are, how rivers impacted these lands and were shaped by them over geologic time.

I marvel at the ways we humans interact with the natural world — sometimes training our farms around the contours of a former drainage, sometimes squashing our cities right up to the river’s edge and attempting to keep it there with concrete and stones.

As a young environmentalist, I was knocked off my feet by Yann Arthus-Bertrand’s book “The Earth from the Air.” I found myself continually asking, “What is that?” as the unfamiliar perspective looking at the Earth twisted the contours of familiar landforms into art on the page by a master photographer. 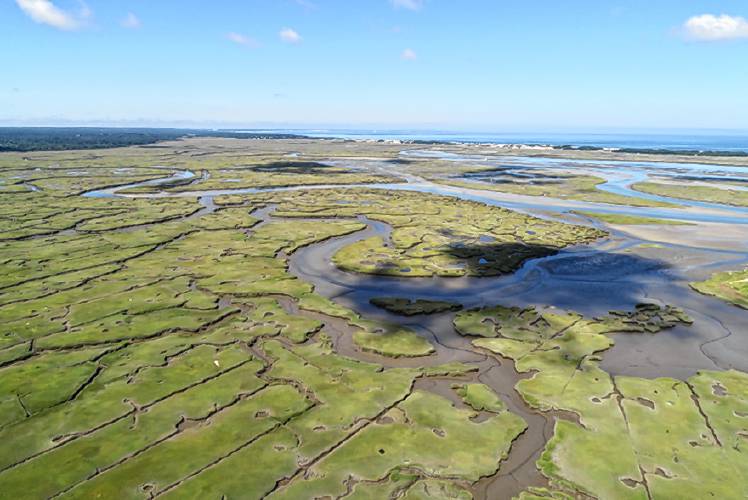 Straight parallel ditches that were dug in a misguided attempt at mosquito control are breaking down and reforming natural branching drainage patterns in a salt marsh in Barnstable. Salt marsh health can be assessed efficiently during every season by drones at low tide. Ryan Wicks

When I arrived at UMass a decade later, the images stuck with me. I designed a class called Reading the Landscape, where we learned why landforms have certain shapes, what the bones of these forms are made of, and how (and why) we map them. Every week I would challenge students with one of these pictures, pushing beyond the everyday vantage point to see Earth differently, richer.

I was similarly disoriented the first time I saw an orthomosaic image, electronically stitched together from hundreds of pictures from a drone, or unmanned aerial vehicle (UAV) or system (UAS). To get our bearings, we tend to seek a horizon line, the spot where the landscape fades into sky in the distance as droplets in the atmosphere impede our line of sight toward infinity until the distance fades into white.

An orthoimage is taken straight down, so there is no such line, no lifeline to tell us which way is up. Because interference is (ideally) at a minimum, colors are bright and crisp; and with hundreds of pictures, detail is exquisite.

There are many wonderful uses for this perspective of Earth. Satellite and aircraft-derived imagery of our planet’s surface have been used for half a century to explore weather, gravity, land cover, and the physics and chemistry of the Earth and its atmosphere. Ever improving, these images remain low-resolution and subject to cloud interference, especially when compared to a UAV picture that can resolve a blade of grass for a tiny fraction of the cost. 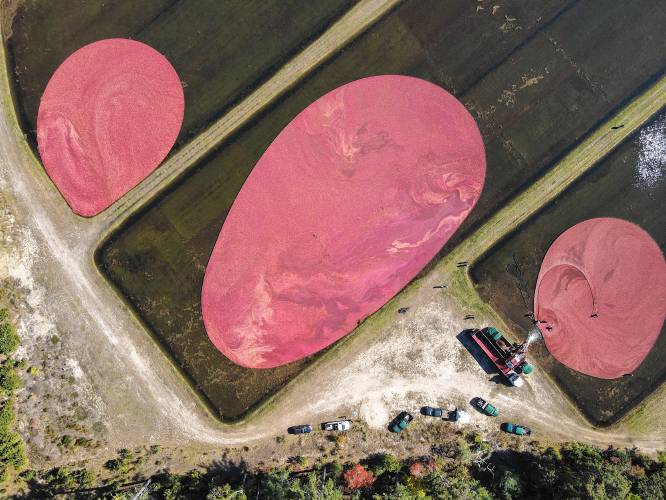 Scientific endeavors have at times been criticized for being elitist and inaccessible, but drones present an opportunity for just about everyone to look at Earth from above. Scientists and laypeople alike can travel over difficult to access terrain, even over water, to produce images without disturbing anything in the landscape: an ideal scenario for zero-impact conservation.

The unusual view from above now augments promotional videos and movies, and even helps with surveying in places that are difficult or dangerous for a human to reach. For example, in 2013 drones were used to help survey the damage after a magnitude 7.8 earthquake in Nepal, and to assess human needs.

One photographer who pioneered the perspective of low-altitude imaging is George Steinmetz, who began taking photographs of the natural world from a motorized paraglider of his own invention (and now also uses a drone). Like his photographs, images from drones have a shocking level of detail, and can take your breath away with their beauty, especially when they capture places that are hard to reach or that can’t be seen well from the ground.

They are also intimate. From drone height I can see backyards and things I’m not meant to see — which brings me to several other important points.

Around the time the drone craze started taking off, the Federal Aviation Administration found itself wildly behind on the technology, and fearful that hobbyists would cause plane crashes. Similarly, public statutes and ethics had not been established for the new technologies — and wildlife, privacy and public safety were paying the price. It was clear that education of drone users was sorely needed.

UMass is answering that challenge. Many folks have begun using drone technology. For example, the Physical Plant Office has mapped campus topography down to the centimeter using structure-from-motion to aid accessibility planning, and researchers are assessing salt marsh health throughout the year at low tide (nearly impossible to do if scheduling full-sized aircraft).

This has created an opportunity to teach students about all aspects of drones and their uses, including drone etiquette. Students finish this training with a thorough knowledge of drone technology, ethics and safety.

The view from the sky is democratizing, but like all functional democracies, we need mutual respect, and to play safely by a few ground rules we all agree upon for the common good: Only fly when conditions are safe (and never over people or roads), always ask for permission first, don’t harass wildlife and let our marvelous world change your perspective.

Christine Hatch is research-extension liaison for the Center for Agriculture, Food and the Environment, and extension associate professor of Water Resources and Climate Change in the Department of Geosciences at the University of Massachusetts Amherst. In her research, she uses temperature to track the movement of water in hydrogeologic systems. For more about drone ethics and safety, visit knowbeforeyoufly.org and slate.com/technology/2016/05/an-etiquette-guide-to-operating-a-drone.html.