The case of the songless songbird: Cedar waxwings 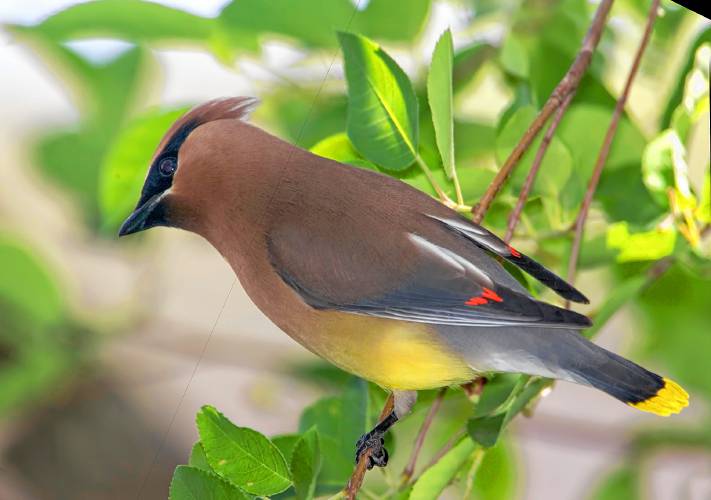 As you read this, with autumn turning toward winter, flocks of dozens to hundreds of cedar waxwings congregate at fruit trees to strip them of their sugar-laden bounty. The “cedar” in the name comes from the birds’ consumption of the “berries” (technically seed cones) of red cedar. In spring the waxwings will again visit fruit trees to eat flowers. Are these birds trendy locavores, sticking to local seasonal harvests? Not quite — individuals and flocks wander for hundreds or even thousands of miles to wherever the food is good, and they show little loyalty to local patches. Harvesting fruit and depositing seeds as they move, they are more analogous to migrant farmworkers than to locavores.

Cedar waxwings, slender birds less than half the size of American robins, are mostly a soft cinnamon- to olive-brown color with yellowish bellies, a small crest, white-bordered black face mask, gray wings and yellow-tipped gray tails. The “waxwing” name comes from the red appendages, looking much like sealing wax, at the end of some wing feathers. These red dots are not wax, but are made of the same protein as the rest of the feathers; they are colored with pigments derived from the birds’ plant foods.

In April, May and June, as cedar waxwings go into breeding season, pay attention to what you don’t see or hear: You won’t encounter a cedar waxwing singing a loud, elaborate song — or any song. Unlike most of the other roughly 5,000 songbird species, cedar waxwings have no song (nor do the other two species of waxwing). They use short, relatively soft and simple call notes, but have no song — no prominent vocal proclamation of territory defense or of a propensity to pair.

Almost all songbird species sing, including those in groups closely related to waxwings, so it is more reasonable to suppose that ancestors of waxwings were singers and that an early waxwing species lost song than to think that many other lineages independently evolved song. Why might a songbird lose its song? Nobody knows. There are several plausible ideas, but there is little evidence to recommend one explanation over another.

The waxwing’s apparent lack of territoriality in the breeding season might allow them to get by without a song. Social interactions in large, complex groups might be more readily negotiated with short, soft and simple call notes than with longer elaborate songs. If males and females are already in contact in social groups there may be no need for a long-distance mate-attraction signal. The need to commit brain volume to memory of a lot of locations and seasonality of fruiting trees over large geographic areas might favor using less brain space for other functions such as remembering songs. (Something like the following might be costly in terms of brain resources: “If the trees that are usually reliable in Belchertown in December fail to provide fruit, try the ones in Westhampton; if Western Massachusetts has a poor fruiting season, try a good cluster of trees in northern New Jersey . . . ”) It’s also possible that there might not be a good functional explanation; the waxwings might simply have lost song by chance and have since managed to get by without it.

The near loss of song and reliance on relatively simple (but loud) call notes by species in the crow and jay family might provide an instructive parallel. These birds do have song, but it is very rarely heard and quiet — apparently a short-distance signal unlike typical widely broadcast songbird song. Like waxwings, crows and jays spend a lot of the year in large social groups; like waxwings, crows and jays need a lot of brain resources for spatial memory, in their case for the many locations where individuals cache food. The similarities are suggestive of similar paths to song loss in these two groups of birds, but very far from conclusive.

The hypotheses I’ve suggested to explain waxwing songlessness will be difficult to test. Although we may never have a fully convincing understanding of how and why these songbirds lost their song, new ideas and new techniques might one day allow progress on this puzzle. We now have good answers to many questions that seemed unanswerable a century or even a decade ago. Check back in a decade or a century, and the case of the songless songbird might be solved. Meanwhile, these birds are on the wing, on their wax-tipped wings, calling quietly to each other (and to us, if we listen) along the way.

David Spector is a former board president of the Hitchcock Center for the Environment and teaches biology at Central Connecticut State University in New Britain, Connecticut. He sings, albeit off-tune, and enjoys both locally grown food and distant travel.