The comet is coming! 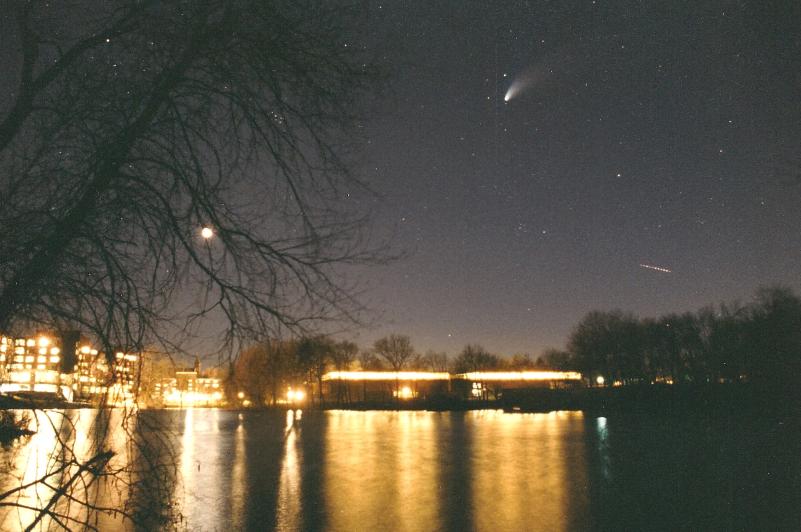 Comet Hale-Bopp was easy to see over the playing fields and pond of Mount Holyoke College in 1997. Will Comet ISON be even brighter than this? Photo courtesy of Aaron Ellison and Elizabeth Farnsworth.

I am fascinated by celestial objects and “once-in-a-lifetime” events in space. Why? Perhaps because they make me pause to reflect on a happening that is so much bigger than me and that I’ll only have the chance to witness and appreciate once. I was, for example, transfixed by the transit of Venus across our sun on the evening of June 5, 2012. Thick, stubborn clouds parted just in time to reveal the planet traverse the sun, a tiny silhouette passing across the fiery solar surface. Every morning, my first “stop” while perusing the Web over coffee before tackling email is the “Astronomy Picture of the Day,” hosted by NASA (apod.nasa.gov), where I can view extraordinary photos and text about supernovas, visit galaxies far far away and boldly go where no one has gone before. (Yes, I watched too much “Star Trek” as a kid.) This fall, a new and exciting astronomical object will enter our realm: Comet ISON (for International Scientific Optical Network, one of whose telescopes is credited with its discovery).

Discovered only a year ago, in September 2012, this comet has attracted the attention of the media, variously labeled the “comet of the century” or the “dirty snowball that fizzled.” It has puzzled astronomers ever since its discovery, because it’s not behaving like most other comets should, being disappointingly dim for its stage of development. Just recently, I nearly scrapped the idea for this “Earth Matters” column because the word was that ISON would disintegrate during its closest approach to the sun (which happens to occur on Thanksgiving Day). But today, the headlines predict that ISON will survive and, in December, will become one of the few comets in our lifetimes that are bright enough to see without binoculars or a telescope.

But before getting all excited about this specter that will soon grace our skies, let’s define what a comet is. Comets are remnants left over from the formation of the solar system some 4.6 billion years ago. Most of the material from the collapse of dust and gases during that time gave rise, through violent collisions, to the large planets and moons that roam our galaxy and, of course, our giant, gaseous sun. But smaller lumps of dust, ice, gas, and some organic compounds formed in the outer reaches of the solar system coalesced loosely into comets. Today, comets still tend to originate in either the Oort Cloud or the Keiper Belt, spherical cocoons of gas and ice that encircle the solar system well beyond the orbit of our outermost planet, Neptune. About 5,000 comets have been documented so far, but trillions are likely to exist in these outer zones.

They spend their lifetimes being buffeted about by each other and falling into orbit around the larger objects in the solar system.

When a comet ventures close to the sun in its gravitationally driven wandering, it heats up and begins to release its gases, including carbon dioxide, methane, and ammonia. These hot gases splay out into a long tail behind the comet as it flies against the solar wind — a rush of particles released by the sun — much as your hair flies out behind you in a speedy convertible.

(Sometimes when earth passes through the tail of a comet on its regular trajectory, we experience a predictable meteor shower; comet Swift-Tuttle, an annual visitor, is the source of the yearly Perseid meteor shower.) The combination of the blazing nucleus that is the comet proper, plus its remarkable tail, determine its brightness in our night skies.

Comets are impressive to look at, but the interest doesn’t stop there. Some theorists hold that much of the water brought to the roiling, young earth billions of years ago were delivered by comets bombarding our planet’s surface. More interesting still is the fact that amino acids, precursors of proteins and DNA, have been detected in comets. Were comets the source of the building blocks of life? Only further study will tell, but just the idea is one more reason to feel a bit humbled in gazing skyward.

Notable comets visible in the Valley in the past decades include Hyakutake (1996), Hale-Bopp (1997), and McNaught (2007). Will ISON measure up or simply break up? Keep your eyes peeled.

Elizabeth Farnsworth, who describes herself as a longtime space cadet, is interim Director of Education at New England Wild Flower Society.