The comforting sight of the common nighthawk

When I was living in Boston, some evening every year in late spring, I would find myself walking across Government Center or through the North End and all of a sudden, over the roar of traffic would come these distinctive nasal calls. I would quickly glance around and then remember to look up. And there against the blue-black of gathering darkness I could see their zig-zagging silhouettes above the buildings. Their flight patterns (rapidly changing direction) and the white patches on the underside of their wings are distinctive. The common nighthawks were doing their aerial displays and feeding.

I always felt more centered and connected to the natural world, even in the midst of a city, when I heard and saw these birds.

In his 1904 book, “North American Bird Eggs,” ornithologist Chester Reed confirmed what I was observing:

“[T]hey are very common in cities, where they will be seen any summer day toward dusk flying, skimming, sailing, and swooping over the tops of the buildings, upon the gravel roofs of which they often lay their eggs. They nest generally on rocky hillsides or in open woods, laying their two eggs upon the top of a flat rock.” 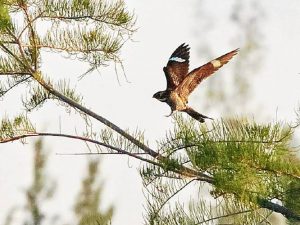 Nighthawks are not hawks, but are in the same family as whip-poor-wills. All birds in this family are nocturnal insectivores, catching insects in flight. They have small beaks and very large mouths with which they scoop their prey from the air. (This method of feeding is sometimes called “hawking,” which may account for the bird’s name.) They can also be found near clearings, fields, ponds and other open areas. They will occupy forested areas after the forest burns, and then abandon these areas as the forest re-grows. At dusk one can see them flying up to 150 feet above the ground in search of their prey. During the day they perch quietly either on the ground or in shrubs and trees. They crouch along the length of a tree branch to aid in camouflage.

Their plumage patterns are made up of browns and grays, intricately beautiful, designed for camouflage. Only once have I seen a bird of this family thus perched; it was a whip-poor-will, not a nighthawk. It was hunkered down on the branch of a big sugar maple in the Dell at Mount Auburn Cemetery in Cambridge. The only reason I saw the bird was due to the location and the fact that hundreds of birders converged on the cemetery early on a May morning. I didn’t find out who spotted the bird, but word was passed among us birders and sure enough, when we got to the Dell there was the bird right on the branch as they had described. It was thrilling to catch a glimpse into this private bird world. We were careful not to approach too close!

Nighthawk nests are simple scrapes on leafy, gravelly, or stony ground. They have adapted to nest on the flat gravel roofs of buildings — thus avoiding all but aerial predators. The vulnerability of ground nests has resulted in rapid development of the young, who can fly at 10 days old.

In addition to their “peenting” calls, the males dive down at high speeds and then as they pull out of the dive their feathers create a brief loud whirring or booming sound. I have not heard this in the wild and I would love to!

Every August, folks gather at known observation locations to see and count the nighthawks moving south during their annual migration. Veit and Peterson’s book “Birds of Massachusetts” (1993) offers this description:

“The fall migration of the Common Nighthawk through Massachusetts is one of the state’s more spectacular ornithological phenomena. During the last week of August and the first week of September, hundreds, and occasionally thousands, of nighthawks are seen flying south at dusk, singly and in loose flocks. The largest numbers are always seen in the Connecticut River Valley, with the counts decreasing steadily eastward. In late August of 1991 one observer counted 3,674 nighthawks in one evening.”

We treasure our nighthawks. However they are only “ours” during North America’s summer. After one of our hemisphere’s longer bird migrations, they winter in Ecuador, Peru, Bolivia, Brazil, Paraguay, Uruguay and Argentina.

Many of our aerial insect-eating birds, including nighthawks, are suffering serious drops in their populations. Barn swallows, chimney swifts and others are also being affected. The Massachusetts Breeding Bird Atlas, covering the years 1974-1979, documented only 13 confirmed nighthawk nest sites in the state. Wayne Peterson, ornithologist with the Massachusetts Audubon Society, states that the last reliable record of a common nighthawk nesting in Massachusetts was in 2012. As is so often the case with concerns about declining species, many factors combine to affect these outcomes; it’s not easy to isolate the causes or to know how to help.

Birders have been accustomed to gather to count the nighthawks. They also count on the birds being there and continuing the cycle of the seasons. Our world is built around the staggering variety of life forms, each creature playing a role in maintaining the diversity and stability of ecosystems — ultimately the systems that support all life. I hope nighthawks will be with us far into the future, reminding us of beauty and intricately adapted worlds far different from our own.