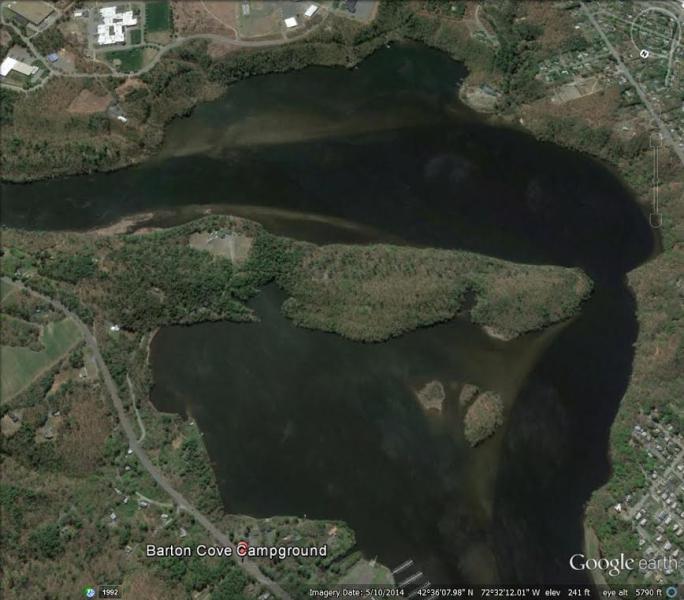 If you’re like I was a few years ago, you may be wondering, “What is a watershed, anyway?”

In fact, the word “shed” is quite descriptive of this geographic phenomenon. Much like rain cascading down one side or another from a shed’s roof, a watershed can be thought of as a geographic area defined by ridges of high ground that determine which direction water travels en route to a major basin, river or ocean.

A large watershed can encompass many smaller watersheds. For instance, the largest watershed on any given continent is defined by the continental divide. In North America, the continental divide runs along the crest of the Rocky Mountains. Broadly speaking, rivers to the west of the Rocky Mountains flow to the Pacific Ocean, and rivers to the east flow to the Gulf of Mexico or the Atlantic Ocean.

Of course, within these enormous watersheds are many smaller regional and local watersheds. The dominant regional watershed in our area is the Connecticut River Valley, whose drainage basin encompasses five states, one Canadian province and 11,260 square miles.

Approximately 410 miles long and passing through New Hampshire, Vermont, Massachusetts and Connecticut, the Connecticut is the longest river in New England. It starts at a small pond known as the Fourth Connecticut Lake in Pittsburg, New Hampshire (only 300 yards south of the Canadian border), eventually dropping, widening and slowing before emptying into the Long Island Sound in Connecticut. Unusually, there is no port at the river’s mouth, as its shifting sands are deemed too unstable to support the necessary infrastructure. 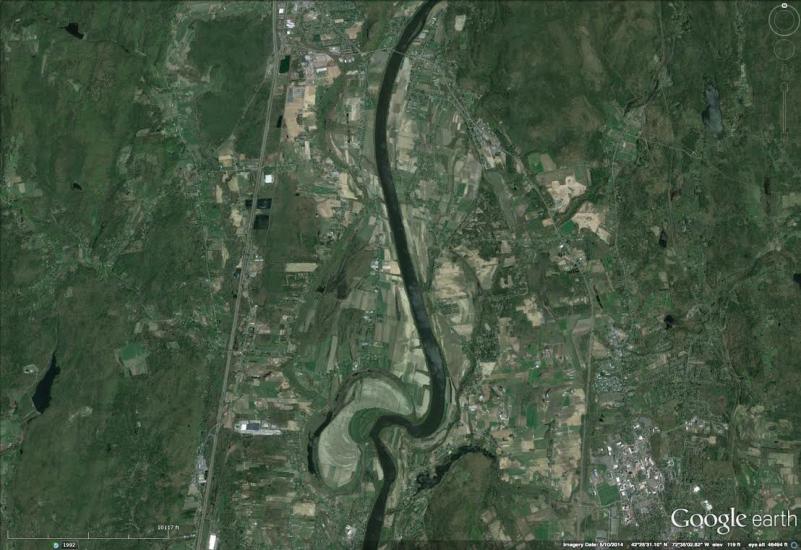 Google Earth
Farms along the Connecticut have long benefited from the former riverbed’s rich soil.

The Connecticut River Valley is approximately 160 to 200 million years old. Like Death Valley, it is a rift valley, caused by the shifting and spreading of tectonic plates. At the time of the rift, this area contained huge mountains, salt flats and isolated lakes. The predominant animals at the time were dinosaurs, some of whose prints can be found at the Beneski Museum of Natural History at Amherst College and the Dinosaur Footprints Reservation in Holyoke.

Within the Valley, the age of the Connecticut River itself, and/or its ancestors, is less clear, as the erosion and rock deposition of Ice Age glaciers (including the subsequent formation of Lake Hitchcock) has muddled the geological data. According to Joe Kopera, associate state geologist and a senior research fellow in geosciences at the University of Massachusetts Amherst, mysteries abound regarding the region’s geology. For instance, it is not entirely clear why the East Coast itself has not already eroded to a flat plain; some new, innovative data-gathering techniques tentatively indicate that geologic faults in this region may have been active as recently as 100 million years ago, influencing the current topography of the Valley.

Additionally, as Kopera points out, aerial photographs clearly show where the Connecticut River used to flow, which is partially indicated by vegetation patterns and farm fields. Other clues also point to changes in the river’s course.

In Barton Cove, for instance, two small coves on the northwest side of the bedrock outcrop indicate the prior existence of old waterfalls and plunge pools where the river previously crossed the peninsula itself, before changing course southwest into what is now a deep, narrow channel.

Of course, humans have had a strong influence on the watershed. Many native tribes, including, locally, the Pocomtuc and Nipmuc, used the river and the Valley’s fertile soils for agriculture, hunting, fishing and transportation.

European settlers followed suit; the valley’s rich abundance of resources were often a source of conflict, including border disputes between Vermont and New Hampshire that lasted nearly 150 years.

Intensive log drives, which ended in 1915, were followed by the infamous flood of 1936. This catastrophic event heavily impacted the towns of Northampton, Hadley, Holyoke and Springfield, causing 171 deaths and $500 million in damage ($8.5 billion in today’s dollars). In 1953, the states along the river established the Connecticut River Flood Control Compact to prevent similar flooding in the future.

The river and its tributaries are heavily dammed, not only for flood control but for power generation, irrigation, sedimentation control and other reasons.

In addition to the ecological challenges caused by damming, such as barriers to fish migration, other challenges include development, invasive species and many types of pollution.

One of the watershed’s primary advocates is the Connecticut River Watershed Council (CRWC), based in Greenfield. Among its many efforts, the annual Source-to-Sea Cleanup draws over 2,000 volunteers in more than 100 cleanup groups across all four states, according to Angela Mrozinski, the CRWC’s Outreach and Events Director.

Astonishingly, over the 18 years of this effort, volunteers have removed more than 897 tons of trash from the Connecticut River, its tributaries and general environs. As Mrozinski says, “Our goal is to keep trash and tires from getting in our rivers in the first place and to eventually put ourselves out of the business of cleaning up our rivers.”

Reeve Gutsell is a volunteer at the Hitchcock Center for the Environment. She has master’s degrees in resource management and conservation from Antioch University, and in creative writing from Naropa University. She enjoys spending as much time as possible exploring the Pioneer Valley. Learn more about this year’s Source-to-Sea Cleanup on Sept. 25 and 26.