The ‘dawn bout’: Why do the birds wake me up so early? 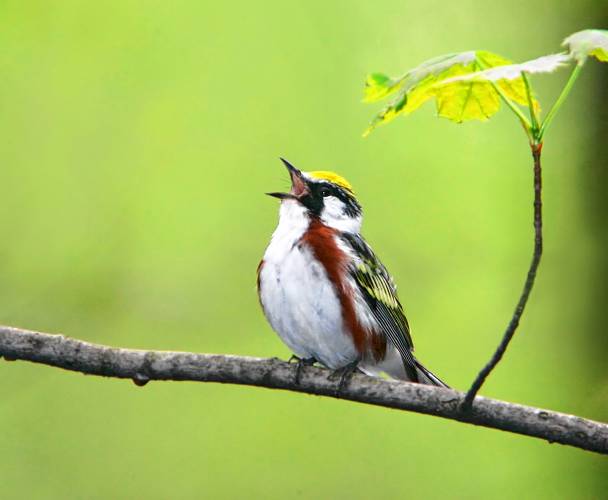 It gives me a thrill

To wake up in the morning

To the mockin’ bird’s trill.”

The thrill or, from some perspectives, the annoyance, of being awakened by bird song raises questions for the inquiring naturalist. What is that dawn chorus of avian voices? Why does a bird sing at dawn?

Birds of many species during the breeding season start singing at dawn; many of them begin at first light well before sunrise. Here in western Massachusetts birds are singing in late May and June by 4:30 a.m. (daylight time). Many birds sing much more copiously at dawn than during full daylight, and many of them sing differently.

The songs and singing used at dawn are often different from those used later in the day. For example, an eastern wood-pewee that uses two songs (“pee-a-wee” and “pee-oo”) by day adds a third song (“ah-dee-dee”) to its dawn twilight singing. A blue-winged warbler sings one song by day and another song at dawn. A yellow warbler sings about a dozen different songs with little repetition at dawn, but much of his daytime singing consists of long strings of a song absent from the dawn bout. Some birds sing much more rapidly at dawn than in daylight, and some intersperse their dawn singing with rapid-fire call notes (“song, chip-chip-chip-chip, song, chip-chip, . . . “). For birds with different day and dawn singing, the early morning behavior sometimes recurs in intense encounters between territorial rivals. Many birds seem to go relatively quiet as the light level increases, presumably because the light allows other activities such as foraging and social interaction.

Unfortunately for anyone attempting to understand the dawn bout, these generalizations do not apply to all species. Some species seem to sing at a similar rate at dawn as later in the day. Some species seem to start singing much later than do those participating in that chorus of dawn voices. Some species seem to change their vocal behavior little, if at all, over the course of the day. For example, the red-eyed vireo, one of our most common woodland species, starts singing later in the dawn period than do most other birds and then sings with little change in singing behavior or intensity through the day. A few otherwise diurnal species, such as the eastern marsh wren and the northern mockingbird, frequently sing at night as well as in daylight.

Why do birds sing so profusely at dawn? The variation I’ve just described suggests that the answer might not be the same for all species. Indeed, more than a dozen hypotheses have been suggested to explain the dawn bout. These hypotheses are difficult to test, and there is little data to support choosing one over another. I’ll present a few of my favorite explanations, which are not mutually exclusive (i.e., they could all be true), but keep in mind that the issue is wide open.

While a bird approaches its daytime encounters with other individuals of the same species — mates, potential mates, territorial rivals — it may need to prepare itself. In some species a bird’s own song is known to affect its hormonal status and thus its behavior. Maybe the dawn bout is a bird stimulating itself as it readies to plunge into the day’s social interactions.

Birds hear each other at dawn. The early morning singing and listening might help to prepare an individual to interact with other singers, by exchanging information regarding who is present and how intensively they are ready to defend their territories and mates.

Non-singers also listen. In our part of the world the females of many species do not sing, but they may get information about their mates or potential mates by listening to their dawn songs and to their vocal interactions with other males. Thus, a male might gain an advantage in mating by singing for the benefit of listening females.

Although the skylark of Europe does not occur here, you can listen to other birds as you rise early with poet John Milton —

“To hear the Lark begin his flight,

And singing startle the dull night, . . .

While the Cock with lively din,

Scatters the rear of darkness thin . . .”

— and wonder with modern biologists about the advantages of singing as the day begins.

David Spector is a former board president of the Hitchcock Center for the Environment and teaches biology at Central Connecticut State University in New Britain, Connecticut. Although fascinated by the dawn bout, he has much in common with the poets described by poet Percy MacKaye:

Walk with Aurora at our pillows’ heads.

For dreamers can see dawn rise in the dark.

Poets are owls that elegize the lark.”