The enduring bond of dogs and humans

The germ of this column came from reading Michael Pollan’s “The Botany of Desire,” which shows the reciprocal relationship between people and domesticated plants: The plants meet human desires and humans propagate the plants widely. My immediate reaction was, “Of course! Dogs and cats!” The idea was helped along when a wonderful dog joined our family.

Researching dog evolution and domestication, I was surprised and fascinated by what I found. The dog is the first domesticated species, predating the development of agriculture. Dogs diverged from a now-extinct wolf ancestor between 20,000 and 40,000 years ago. It seems likely that the generic dog ancestor arose as a distinct species at least 15,000 years ago, and came about because of the relationship that evolved between proto-dog and human.

It’s fair to say that humans didn’t domesticate this early dog, but rather that it domesticated itself. One researcher describes the process as “survival of the friendliest.” Most wolves, this theory goes, “would have been fearful and aggressive towards humans — because that’s the way most wolves behave. But some would have been friendlier, which may have given them access to human hunter-gatherer foodstuffs,” probably discarded carcasses and other scraps.

Natural selection could have favored a few genes that engender “hyper-social behavior,” according to another scientist, that would have motivated these animals to “seek out prolonged interactions with humans.” We were providing food and probably shelter from the elements, and likely also protecting them from predators and competitors.

By associating with humans, dogs ensured greater survival of themselves and their offspring than their less-friendly counterparts. Over time, physical changes developed, such as curly tails and floppy ears, that further distinguished them from non-domesticated, more wolflike dogs.

If the story ended there, it would be interesting but might not have led us to the dogs we have today. Something more happened, and one piece of evidence suggests what that was. 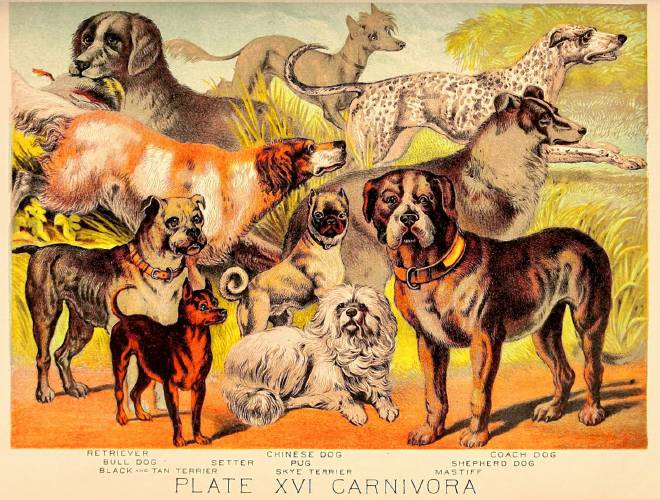 In 1914, a stone tomb was unearthed in a quarry near Bonn, Germany. In it were skeletons of a man, a woman — and a dog. Later study revealed that they were about 14,000 years old, the earliest indication of a close relationship between humans and dogs. They were close enough that whoever buried them kept them together. Clearly, by that time, domestication had evolved into a deeper connection than simple survival.

Humans and dogs evolved in parallel with each other, such as developing adaptations to living in certain environments and being subject to many of the same diseases, a process called convergent evolution. As humans developed agriculture and grains became more central to their diets, selection likely favored genes that allowed dogs to digest starch — a trait not found in wolves.

Coevolution also occurred, such that over time, close emotional ties between people and dogs developed. Studies have shown that prolonged eye contact between them leads to increased levels of the hormone oxytocin in both, working to enhance inter-species bonding.

A study of dog remains from about 9,000 years ago in Siberia indicates breeding to develop sled dogs or hunting dogs, differing primarily by size and weight. The authors go on to suggest that dog evolution after contact with humans consisted of three stages.

First came natural selection based on feeding at human encampments and settlements and the increased survival and offspring that followed from that reliable food source. The second was artificial selection by humans, choosing the dogs that would stay with them — those with the friendliness trait — and which would be driven off or killed. Third, “directed” selection — breeding — created types of dogs to help with specific tasks or desires, which continues to the present day.

Dogs today show the greatest variability of any mammal on the planet. For millennia, our forebears have been shaping dogs to their needs and the dog genome has obliged. Drawings from ancient Egypt show dogs resembling modern mastiffs with big heads and bodies, which may have been guard dogs, and slim dogs with curled tails, possibly used in hunting.

The 1500s produced hounds, bird dogs, terriers and shepherds. But it was the Victorian era (1830-1900) — the blink of an eye in dog history — that brought on an explosion of breeds, producing most of the 450 or more breeds recognized today. Along with those, there are also many mixes and unregistered breeds that make up the full list of types.

Breeding takes advantage of dogs’ variability, but it also reduces the overall genetic diversity of the species, since each breed is defined by its ability to reproduce very similar copies of that type. Most of the breeds that have been developed have come from wealthy countries, where there is a ready market for purebred dogs. The rest of the world — mostly in Asia, Africa and Latin America — is home primarily to feral or “village” dogs, usually with no specific owner. These are the likely genetic “melting pots” for the world’s dog population.

As ordinary as our relationship with dogs appears, it represents a long, complex and fascinating history of evolution, both natural and directed. And there’s still more waiting to be discovered and understood.

Michael Dover is a former board member of the Hitchcock Center for the Environment and a retired environmental scientist. He and his wife share their house with an Australian cobberdog named Jack.

In response to the COVID-19 crisis, the Hitchcock Center has adapted programming and launched a new sliding-scale fee structure for families facing financial challenges. To help the Hitchcock Center survive this difficult time, please make a donation at hitchcockcenter.org.