The evolution of a pollinator gardener

I love to grow stuff. I’ve been gardening since elementary school. When I grew my first sweet corn in fifth grade, I was so amazed when I went to the garden one day and the corn plants were taller than I was!

Since then, I’ve learned a lot about how to keep plants healthy and happy, and have experimented with a wide range of species. In the process, I’ve had successes and a great many failures. With all the recent talk of planting for pollinators, I’ve lately been adopting a perspective in addition to my long interest in promoting diversity.

I knew about pollination and honeybees but am now actively working to support pollinators. On a Hitchcock Center field trip in 2017, I learned about some of our less common native bee species. Upon returning home I observed my (nonnative) lamb’s ear in blossom and, sure enough, there were wool carder bees (also nonnative). The aggressive males were dive-bombing any other insect that dared approach the flowers. The industrious females were gathering pollen and nectar and “wool” from the leaves to pack into crevices as a nest for their eggs. They had been right there in front of me, probably for years, but I never took the time to stop and look.

That August, as I learned more about pollinators and took time to observe them, my pink diamond hydrangeas came into bloom. I’d seen insects flying around the big flower clusters in other years, but hadn’t focused on them much.

As I watched, the flowers were mobbed by honeybees, flies, smaller bees and wasps. It was fun to watch them all buzzing around the flowers, learning to distinguish different species, and searching out patterns in their behavior.

One day I watched a big, fast, bald-faced hornet zooming around the flowers. And soon I noticed that she wasn’t nectaring at all, but seemed to be patrolling quickly around the flowers. And then I saw her collide with a smaller insect in what could only be a purposeful way. I saw the same thing again and again. I was intrigued, wondering what was happening. Looking up the bald-faced hornet online I found, sure enough, that they are predators, feeding chewed-up flies and other prey to their larvae.

I had discovered this natural drama in the world of pollination around my hydrangeas! I have an affection for bald-faced hornets, even though I have vivid memories of blundering into a nest in a bush outside our front porch when I was a kid and getting painfully stung a number of times. I still like them — they won’t hurt us if we don’t bother them. 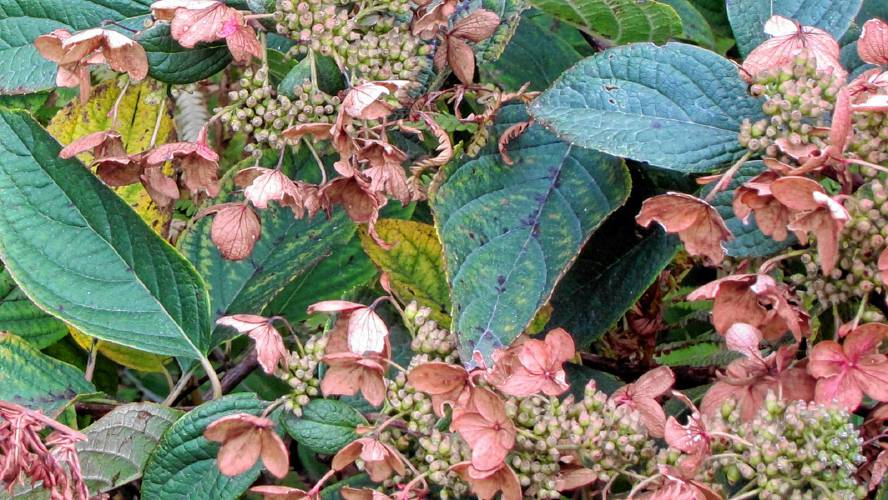 Pink diamond hydrangea is one of the plants in the author’s pollinator garden. He discovered through observing pollinators around his hydrangeas that bald-faced hornets are predators as well as pollinators. cultivar413/via Flickr

I’m getting rapidly on board with plantings to support pollinators, especially natives. There’s a general consensus that the best way to serve our native pollinator species is to provide a diverse array of native plants that offer pollen/nectar throughout the growing season, and that’s what I’m trying to achieve.

My gardens in our suburban neighborhood attract a variety of them. I’ve removed some of the peonies and double irises that have had the pollen bred out of them, and taken out some of the evergreen shrubs that are pollinated by wind and not insects. I’ve replaced them with a variety of perennials rich in pollen and nectar. Some of my favorites are blue cloud calamint, sweet black-eyed Susan, cut-leaf coneflower, a variety of trilliums, wild ginger, mountain mint, seaside goldenrod, fern-leaf bleeding heart, shrub bush-clover, scarlet bee-balm, New England aster, summersweet and American witch hazel.

Our raspberries and blackberries also attract a lot of pollinators.

I love nurturing a landscape that welcomes insects and the birds that feed on them. It’s a small attempt to recreate an ecological diversity that so many of our land-use decisions destroy. We humans depend on the natural systems that support all life. And learning ways to support native pollinators is one way I try to help maintain those systems.

Ted Watt is an educator/naturalist at the Hitchcock Center for the Environment. See a list of the plants he has used in his gardens.

Earth Matters has been a project of the Hitchcock Center for the Environment for 11 years, produced by volunteers and friends of the center. The COVID-19 crisis has caused the center to cancel almost all programming, leading to a huge budget shortfall. To help Hitchcock through this very challenging time, please visit hitchcockcenter.org to make a donation.