The ghost in the woods has something to say 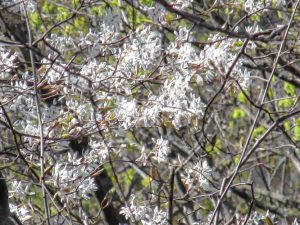 For a short few days in the early spring, ghostly clouds of delicate flowers dance briefly among the leafless trees in our local hardwood forests. Look carefully and you’ll find that these clouds are scattered individuals of a small understory tree called shadbush, so named because it fruits in June when the shad return to our rivers.

The numerous species of shadbush have many other common names, such as shadblow, sarvis, serviceberry, june berry, saskatoon (for a Canadian cousin) or even sugar plum and chuckley pear, so the exact taxonomic details of these trees are very difficult indeed.

They are in the rose family along with apples and pears, and all are members of the genus Amelanchier, and that is where most agreement ends. Some books list 20 species, some as many as 80. I usually just give up and just call them all shadbush.

Botanists use the term “hybrid swarm” to back our way out of our inability to provide a specific scientific name, but it does largely correspond to reality. Individual Amelanchier trees are almost impossible to key out to the species level. The high variability of this tree is one reason, I think, that so many herbarium specimens, with flowers, have been collected over the past 200 years — a significant part of the shadbush message.

Amelanchier trees play pretty much the same ecological role wherever they are found. A small tree or shrub, some shadbush “species” are found in the understory of moist or wet woods, in places still recovering from disturbances such as fire or beaver flooding or high winds, and others in drier, acidic woods. Ripening in June, shadbush trees produce copious fruit about one year in three. I have rarely been able to get to our local shadbushes in time to gather fruits — the birds get there first! Much as I would like to beat the birds to the berries, birds and other wildlife perform a crucial service for the sarvis (!), spreading seed to new open habitat and scarifying the seeds along the way so they will germinate.

Taken together, then, we have in the shadbush a beautiful, adaptable, widespread fruiting tree species that is never very common. It takes advantage of the early spring season to flower and set fruit before other species, and then recedes into the background. Or, as Macbeth might have said of it were he a botanist:

“This (serviceberry) …. is but a walking shadow; a poor player that struts and frets his hour upon the stage, and then is heard no more: it is a tale told by an idiot, full of sound and fury, signifying nothing.” (with apologies to William Shakespeare)

Actually, the timing of the very short flowering period of the shadbush, only three to five days, signifies a very great deal. Using dozens of shadbush herbarium specimens collected over a long period of time, a scientist from the University of Delaware and the Longwood Gardens was able to document a powerful trend in the flowering time. She calculated a highly predictive line describing a change of 27 days earlier between 1840 and 2010. In fact the actual dates observed were May 9 in 1840 and April 4 in 2010, one of the warmest years on record. And the flowering time was strongly correlated with early spring and late winter temperatures. Shadbush flowered about two days earlier for every 1-degree Fahrenheit increase in average monthly minimum temperature in March and April.

The results from around Philadelphia corroborate another study using Henry David Thoreau’s observations of spring wildflowers, including shadbush, at Concord, Mass. from 1852 to 1858 compared to resurveys in 1878, 1888–1902, and 2003–2006. This study shows that flowering times shifted earlier by 1.8 days for each degree of change in average January temperature. And, Aldo Leopold and his family and students collected phenological data in south-central Wisconsin from 1935 through 1945 and noted that Amelanchier began flowering at dates ranging from April 10 to May 9. When this area was resurveyed from 1977 to 2012, average flowering time had shifted by 2.3 days per degree. In fact shadbushes in 2012 flowered at the earliest date ever recorded in that region, March 25, 24 days earlier than recorded by Leopold.

The ghost in the woods is sending a very clear message — climate is changing and plants are responding. But, because shadbush is a close relative of the apple, I suspect it also requires chilling for flowering and setting fruit to take place. Unless enough cold days have passed when spring arrives, the hormonal changes that lead to flowering will not occur. The southern limit of the main shadbush range is now in Tennessee and North Carolina at the southern end of the Smoky Mountains. Could it be that, if temperatures rise even more, flowering shadbush will no longer haunt our woods because winter temperatures are too high? Or that it will disappear altogether from our region, as many climate change models predict?

Whatever the answer, let’s appreciate shadbush this year. Watch for this ghost in the woods this spring and note the location, so you can try to beat the birds to berries in June.

Lawrence J. Winship is emeritus Professor of Botany at Hampshire College. For more on phenology and climate change, see Patrick O’Roark’s column from July 2017 and Ted Watt’s essay from 2016.