The giant elves of fall 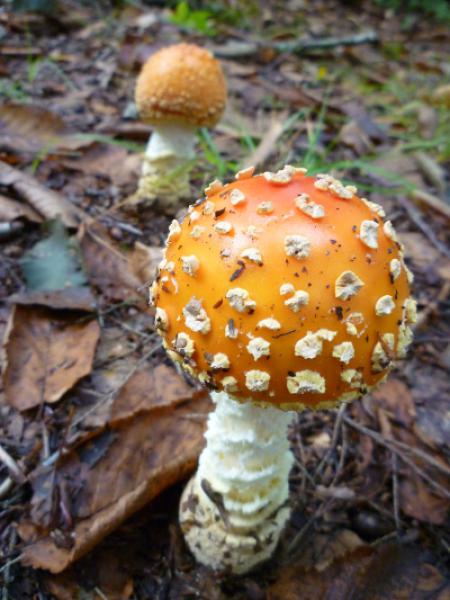 The mushroom is the elf of plants,

At evening it is not;

At morning in a truffled hut

It stops upon a spot

The germ of alibi;

Had nature any outcast face,

Could she a son contemn,

Had nature an apostate,

That mushroom, — it is him.

I’m looking down to see what’s popping up. Late summer and early fall is mushroom time, when lawn and log, forest and field are often decorated with the reproductive, spore-producing bodies of fungi, or “mushrooms” in the widest sense of the word.

These mushrooms come in a fascinating variety of sizes, shapes and colors. Some are deliciously edible — but others are poisonous and sometimes deadly. Mushrooms’ beauty, edibility and potential peril have caught the imagination of naturalists and poets for centuries.

Amherst poet Emily Dickinson had several observations about mushrooms. She called the mushroom “the elf of plants,” and many small capped mushrooms have an elfin appearance, perhaps contributing to traditional images of elves, dwarves, leprechauns and other small human-like creatures.

Although many mushrooms are dainty, others achieve considerable size. I wonder if Dickinson would have used “elf” to describe a two-foot diameter giant puffball or a 50-pound hen-of-the-woods. More fundamentally, many of the organisms that produce mushrooms are truly huge, consisting of vast networks of tiny fibers running through soil and wood. Some of these organisms spread over hundreds of acres and have been estimated to weigh hundreds of tons, much larger than the largest whales. If you have difficulty thinking of mushrooms scattered over a wide area as one organism, think of a tree in flower and then imagine the tree buried with just the flowers showing above ground: That image gives a rough idea of the relationship between the mushrooms and the entire fungus.

In her day — and indeed until relatively recently — mushrooms (and other fungi, such as yeast) were classified as plants, as justified by their plant-like sedentary growth habit emerging from the soil. Today, with a more detailed understanding of the chemical structure of the organisms, and of the genetic relationships among the various forms of life, biologists realize that — despite superficial appearances — fungi are more closely related to animals than to plants, and fungi are given their own “kingdom” separate from either plant or animal.

Fungi, like animals, are “heterotrophs”: that is, they do not directly capture chemical energy from sunlight. Heterotrophs depend on photosynthesis: storage of solar energy in sugar by “autotrophs” — plants, algae or photosynthetic bacteria.

There are several ways in which a fungus that does not produce its own sugar can get chemical energy from other organisms. It can act as a decomposer, like many soil inhabitants, getting nutrients from dead material; it can act as a parasite, taking nutrition from living hosts to their detriment; or it can act as a “mutualist” with a photosynthesizer, exchanging some other benefit for sugar.

Many fungi, including many that produce mushrooms, have mutualistic interactions with plants. In these “mycorrhizal” relationships, fungal fibers are very closely associated with plant roots, and the two types of organism exchange nutrients with each other. The fungi in these relationships receive photosynthetically produced sugars from their plant partners and deliver essential inorganic nutrients from soil to the plants in return. This mutualism plays a central role in shaping the world as we know it, with the vast majority of land plants more or less dependent on subterranean fungal partners.

Emily Dickinson described her mushroom as not only an elf, but as an “apostate” of nature that could be worthy of nature’s contempt. Dickinson does not describe the nature of the mushroom’s apostasy; the poisonous nature of many mushrooms, their brief and sudden appearance above ground (Dickinson compares mushrooms to bubbles) and their lack of green might all justify the charge. Were Dickinson writing today, with a modern knowledge of mushroom ecology, she might approach the subject rather differently. If she had realized that many fungi are large and long-lived, even if their above-ground mushrooms are present only briefly, and that many of these fungi shared resources with plant partners, how would she have described mushrooms? Of course we’ll never know; poets, like the rest of us, respond to the societies in which they live, including the scientific knowledge available at the time.

As I look down to see what’s popping up and appreciate the diversity of mushrooms, I keep in mind the human histories of poetic responses to and scientific understanding of these intriguing organisms.

David Spector is a former board president of the Hitchcock Center for the Environment and teaches biology and English at Central Connecticut State University. To learn more about Emily Dickinson, her poetry, and her connections to the natural history of the Connecticut Valley visit the Emily Dickinson Museum in Amherst.

Earth Matters, written by staff and associates of the Hitchcock Center for the Environment at 525 South Pleasant St., Amherst, appears every other week. For more information, call 413-256-6006 or write to us.