The Outermost House: A Year on the Great Dune of Cape Cod,” is an eloquent account of life on the beach at Cape Cod 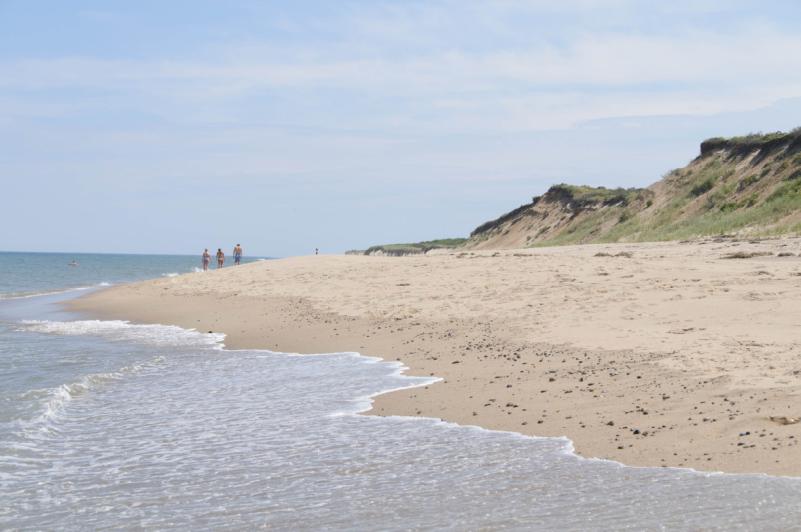 Benjamin Bezine, via Creative Common The beach in Eastham

Once in a while a book speaks to me in a certain way, and I read it and reread it, gleaning something new each time.

One of those is “The Outermost House: A Year on the Great Dune of Cape Cod” by Henry Beston, first published in 1928.

Part nature book, part memoir, part meditation, part spiritual journey, the book draws me back for its picture of a place and its animals, plants and people. I’m drawn, too, by the author’s portrayal of the ever-present sea and sand: their shapes, moods, colors, sounds and smells.

Mostly, though, I come back for the writing — an extended prose poem, an ode to the flow and ebb of life on the Cape.

The story began in 1925, when Beston bought a tract of beach at Eastham, and designed and had built a snug two-room cottage on the top of the Great Dune. Contained in that small space were a bedroom, kitchen area and living/dining room — and an abundance of windows. Heat came from a fireplace fueled by driftwood; he cooked with a kerosene stove and obtained water from a pipe driven deep into the ground.

In the fall of 1926 he came expecting to spend two weeks, but “(t)he fortnight ending, I lingered on, and as the year lingered into autumn, the beauty and mystery of this earth and outer sea so possessed and held me that I could not go.”

So it was that he decided to record a year on the dunes.

This was no hermit’s withdrawal. Beston lived alone but was never bored or lonely. He had friends in Eastham village whom he visited when he walked in for groceries. He had visits from the coast guardsmen who walked the beach, seven miles in each direction, every night no matter what the weather, watching for vessels in distress. And he lived amidst the profusion of life inhabiting the beach and its surrounds: resident and migrant birds, insects, spiders, deer, skunks and more.

“(T)hus enclosed within a great whirl of what one may call the life force, I felt that I drew a secret and sustaining energy.”

But perhaps his most valued companion was his writing. “The longer I stayed,” he writes, “the more eager was I to know this coast and to share its mysterious and elemental life.”

The book shows Beston as a master observer. He knows his birds well, recording the comings and goings of countless species. The Cape is temporary host to a great many birds on their way between northern breeding grounds and southern wintering places, and Beston describes them and their habits in fine detail.

He notes the tracks of insects and mammals on the dunes, observes trapdoor spiders and other minuscule creatures as they make their living.

At the edge of the sea, he sees fish driven onto the sand by predators, there to be swooped up by gulls and other birds. And he wades in bioluminescent surf, courtesy of millions of microscopic organisms: “I walked in a dust of stars.”

Not content with describing the visual world around him, Beston gives an aural portrait of the sea, cataloguing the sounds of waves at different times and in all kinds of weather. And it is in such descriptions that he becomes most eloquent:

“The three great elemental sounds in nature are the sound of rain, the sound of wind in a primeval wood, and the sound of the outer ocean on a beach. I have heard them all, and of the three elemental voices, that of ocean is the most awesome, beautiful, and varied. For it is a mistake to talk of the monotone of ocean or the monotonous nature of its sound. The sea has many voices. Listen to the surf, really lend it your ears, and you will hear in it a world of sounds: hollow boomings and heavy roarings, great watery tumblings and tramplings, long hissing seethes, sharp, rifle-shot reports, splashes, whispers, the grinding undertone of stones, and sometimes vocal sounds that might be the half-heard talk of people in the sea.”

In much the same vein, he describes the feel and color of sand at various distances from the water and at different times of year, and the beach experienced through the nostrils:

“I dwell in a world that has a good natural smell, that is full of keen, vivid, and interesting savors and fragrances. I have them at their best, perhaps, when hot days are dulled with warm rain.”

Observer that he is, Beston doesn’t place himself above his subjects:

“(T)he animal shall not be measured by man…. They are not brethren, they are not underlings; they are other nations, caught with ourselves in the net of life and time, fellow prisoners of the splendor and travail of the earth.”

At its heart, this book is a call to see ourselves not only in nature but of it. Nature is, he says, “a part of our humanity, and without some awareness and experience of that divine mystery man ceases to be man.”

Michael Dover is a retired environmental scientist and a former member of the board of the Hitchcock Center for the Environment. Eastham Beach is now known as Coast Guard Beach, part of the Cape Cod National Seashore (www.nps.gov/caco). Beston’s house, which he called The Fo’castle, was swept away in a massive winter storm in 1978. “The Outermost House” remains in print, and is available through local bookstores and at most libraries.