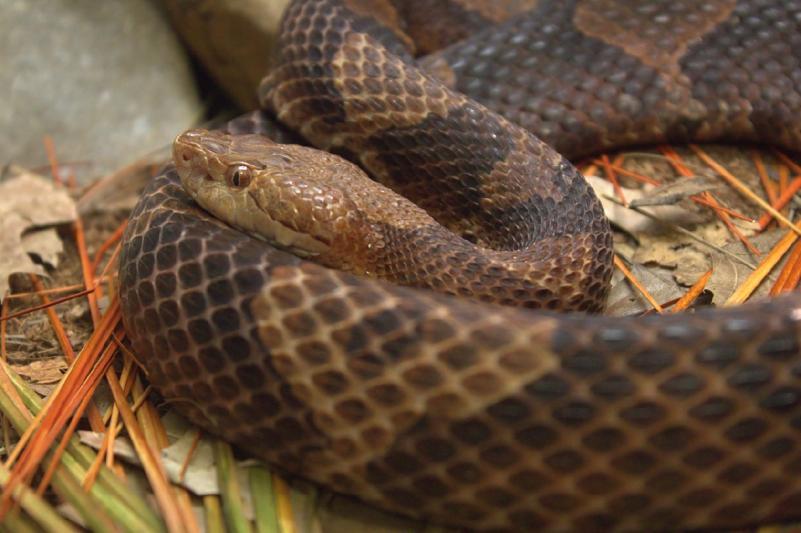 At a meeting of the Hampshire Bird Club last June, a friend shared with me some pictures of snakes and offered to show me where she had seen them. The snakes were northern copperheads, a locally uncommon species I had never seen, so I was eager to take her up on the invitation. A few days later my wife and I joined our friend for a hike on a forested, rocky, uphill trail.

Long before we reached our destination, the walk offered many other rewards. Along the way we were treated to a diverse array of wildflowers. Especially notable were the pink and yellow pale corydalis, appropriately also called rock harlequin. Northern bush honeysuckle provided abundant yellow blooms where the trail crossed openings in the forest. We also enjoyed seeing and hearing the towhees and indigo buntings, birds that breed in those openings. A wood thrush singing nearby was a treat to our ears. At turns of the trail we drank in expansive views of the Connecticut Valley.

After we had gained a few hundred feet of elevation, but well before the summit of the hill we were climbing, our friend stopped at a small rocky opening. She spent a brief time staring at the ground and then pointed to some dead leaves under a bush. I stared at the leaves, leaves like any other dead leaves that might accumulate under a bush in a forest, until I could see that they were not leaves but the amazingly well-camouflaged, dead-leaf pattern of a copperhead. Had I not been with someone who knew exactly where to look, I would have walked right by the snake. I was especially pleased when the snake moved its head into view and I could see that the head indeed was the coppery color for which the species is named.

We spent about a half-hour watching and enjoying the snake. During that time many hikers, some accompanied by dogs, walked past us and the snake without noticing it.

The snake, true to its species’ reputation, made no effort to confront these large animals that were walking by its resting spot. The only indication that either we or the other hikers might be disturbing the snake was that it moved a short distance under a rose bush and became even less visible than it had been. I feel fortunate to have seen this lovely animal here near the northern edge of its range, especially now that I have seen for myself how cryptically it blends with its environment.

Although the snake was the excuse for and the highlight of the hike, we would have enjoyed the flowers, views, birds, rocks, and especially the sharing of these with or without the snake. Disclosing such information to others — whether to members of a larger organization like a nature center or bird club, or simply to a handful of friends — is part of the fun of being a naturalist. There are limits, though, to sharing. It’s best not to publicize the locations of rare plants that someone might want to dig up for a garden, or of rare animals that might be subject to disturbance if confronted with hordes of observers. In this case, the copperhead might not just be disturbed; it might be killed by someone with an aversion to poisonous snakes or captured and sold by people involved in the illegal trade in poisonous pets. Our friend shared the location with people involved in snake conservation, but we are not sharing this information more widely.

There are other reasons for keeping the details to oneself, including the obvious reason that many people are reluctant to reveal “secret” locations of delicious edible wild plants and mushrooms! (There is also the danger that patches of wild edibles and herbs will be over-harvested if too many people know their whereabouts.) Nevertheless, sharing knowledge and experience is important, not only among fellow naturalists, but with children and other budding nature enthusiasts. Sharing what we know with others is key to fostering curiosity about and respect for the species with which we share this world.

The inspiration they experience can lead to a desire to preserve and protect these species and their habitats. I am grateful that our friend trusted us to share what she knew about a rarely seen animal and a lovely morning’s walk.