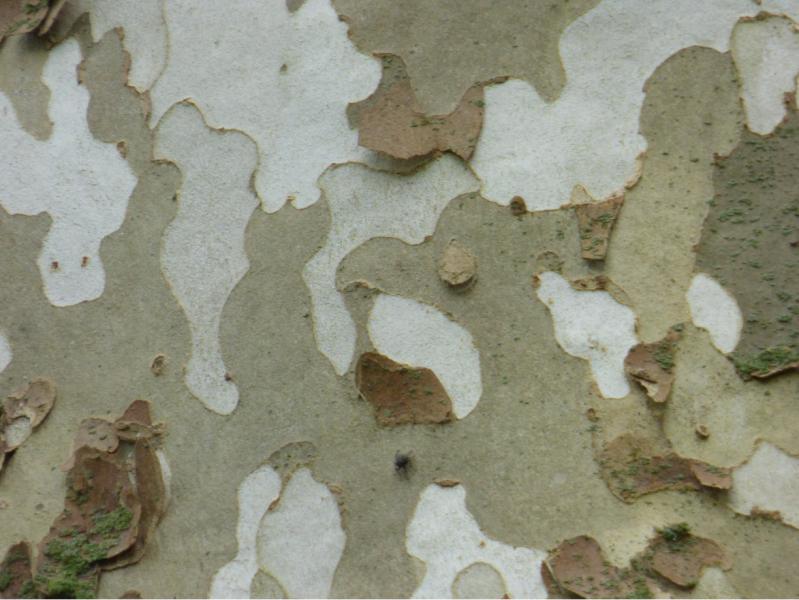 DAVID SPECTOR Some people see a jigsaw puzzle, toads or engravings in the bark of this sycamore, the famous Buttonball Tree on Route 47 in Sunderland.

I’ll be thinking about the eastern sycamore tree this Independence Day, an American tree on our national holiday.

Although all trees might be said to be “created equal” from a moral perspective, each tree species has its own value to those who use trees.

From the perspectives of those who enjoy the aesthetics of trees — looking at, climbing up, lolling under, and versifying about trees — different species have different emotional impact. Cultural background and personal history influence the value each person gives a tree.

An early encounter with environmental education had a life-long influence on my attention to the sycamore, a tree I notice both in life and in poetry. At a summer nature camp when I was in elementary school I learned the names of some plants and animals that continue in my repertoire today. The largest of these is the eastern sycamore, a tree I was taught to recognize as the “puzzle tree” for the similarity of the large-flaked, variegated bark on its trunk to a jigsaw puzzle. This feature both makes the sycamore one of the most easily recognized trees and inspires views of a “spotted toad” on a “winy wave-engraven” bark in the words of poets Richard Wilbur and James Whitcomb Riley, respectively.

The higher parts of a sycamore often lack the mottled flakes of bark and emerge from the darker lower trunk as smooth whitish branches. Poets with eyes for these pale upper reaches of the tree have included Marianne Moore seeing an “albino giraffe” and William Dean Howells describing “hoary-antlered sycamores.”

The London plane tree, more resistant to a fungus that damages leaves, is more often planted along city sidewalks.

A simple way to distinguish these two trees is by counting seed balls in fall or the overwintering ones in early spring: one seed ball per stem indicates the native sycamore; two seed balls hanging together identify the London plane.

These seed balls inspired the folk names “buttonball” and “buttonwood” for the eastern sycamore. Sycamores have long been used to line streets; Thomas Jefferson, an author of the Declaration of Independence, put the sycamore first in his list of native ornamental plants in “Notes on the State of Virginia” (1785), presumably planted by slaves to be enjoyed by plantation owners. 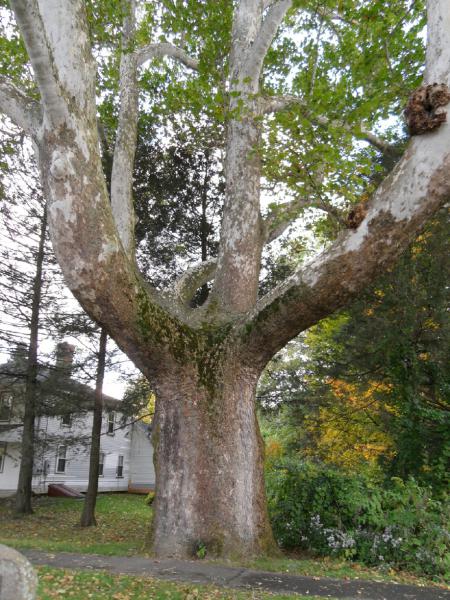 As is true of many trees, sycamores grow in a variety of forms, depending on an individual’s immediate environment. In open habitat a sycamore may branch widely above a short trunk and spread out over a 150 foot diameter. In denser situations, especially where a narrow valley crowds trees competing for sunlight close together, sycamores grow tall and straight. Sidewalks and metal grills in a city may keep a trunk relatively narrow, whereas sycamores in freer environments can well exceed even the 25-foot circumference of the famous Sunderland Buttonball Tree.

Trees often form a large part of people’s feeling for a location.

Poet Emily Dickinson timed sunrise with sunlight getting “as far as the third sycamore,” presumably one of a row growing near her home. Hoosier lyricists Paul Dresser and Ballard MacDonald have sycamores in typical streamside habitat along Indiana’s Wabash River in two famous songs about that state; here in New England John Blackburn counted a sycamore as one of the evocative sights in “Moonlight in Vermont.”

From ancient times a sycamore, or the similar plane tree of Europe, has been considered a friendly place to sit and talk — “platanus genialis,” the sociable plane tree, of the Roman poet Ovid. Our oldest local sycamores have been alive and places to gather since before the events of 1776 celebrated today.

While fireworks light the holiday night, consider also the light and dark of the sycamore trunk, the genial spread of its branches and, as Walt Whitman suggests in his poem “Our Old Fueillage,” shadows and glimmers “up under the leaves of the old sycamore-trees.”

David Spector is a former board president of the Hitchcock Center for the Environment and teaches biology at Central Connecticut State University in New Britain, Connecticut. A web page by Earth Matters contributor Robert Leverett provides information on local large sycamores.