The red-backed salamander: Not iconic but abundant

There is a bounty of animal life beneath our feet. Turn over a log in a forest for a glimpse at some of the hustle and bustle of soil creatures: Earthworms, millipedes, small insects and others feed on fresh or decaying plant matter. 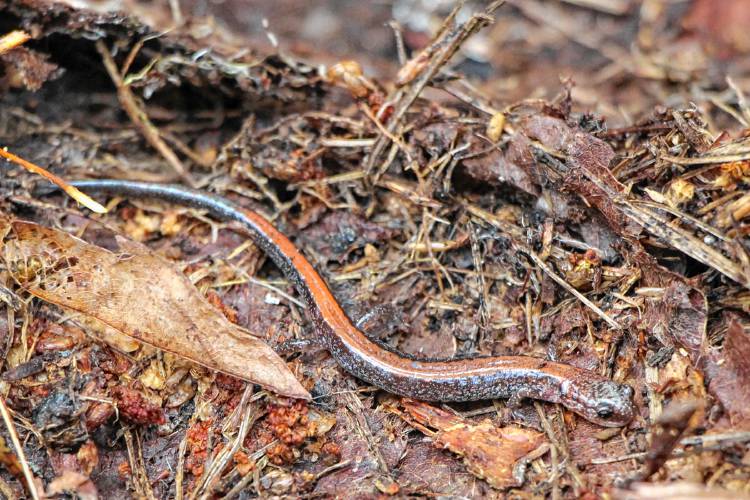 The red-backed salamander is the most abundant of the soild salamanders. RKLawton/ Creative Commons

Many smaller animals are likely to escape notice unless one examines the soil with a hand lens or microscope. Small creatures are hunted by centipedes, spiders and beetle larvae. If you are lucky you might uncover one of the larger, less common predators — a small snake or a large salamander, such as the spotted salamander, an icon of Amherst and of the Hitchcock Center for the Environment. A mid-sized predator from the perspective of this soil community, the smaller red-backed salamander is much more common.

The red-backed salamander, which can often be found with a little searching under logs, is the most abundant of the soil salamanders. It is usually readily recognized by the dull red stripe along the back, but some individuals (“lead-backed”) lack that stripe; regardless of back color, all members of the species have a distinctive salt-and-pepper pattern on their undersides.

This is a tiny creature with a maximum length of five inches, and an average weight of a bit under a gram. It would take about 16 red-backed salamanders to match a spotted salamander’s weight, about 550 of them to make up a pound.

Small though they are, the red-backed salamander population in a forest may weigh as much as all the small birds or small mammals in the same area. A famous study at the Hubbard Brook forest in New Hampshire estimated a density of over 1,000 of these salamanders per acre, but other studies with different sampling techniques in various eastern forests have reported much higher, even 10 times as high, densities.

These creatures might not be as obvious — or as pretty or as “cute” from a human perspective — as thrushes or chipmunks, but they may be even more important for shaping forest ecology.

With that density there is considerable opportunity for interactions, and these soil denizens have as complicated a social structure as those of many birds or mammals. The salamanders are territorial, defending areas of soil against other individuals. Territorial defense can lead to altercations, and many individuals have scars on their tiny faces, evidence of bites in fights.

Repeated exposure to individuals, and to their chemical signals, results in knowledge of neighbors and less intense responses to them than to intruding strangers, which is a common pattern among territorial animals.

The red-backed salamander has advantages over the many amphibians threatened by loss of vernal pools for breeding and the need to cross roads to get to those pools. The females of this species lay their eggs in clusters (average about eight eggs) in the soil or in rotting logs, and stay with the eggs to provide some defense against small predators. These salamanders spend their larval stage entirely in their eggs and never need to be in water.

A tire track compressing soil or the removal of a downed log can cause disruption to a few individuals, but large populations of this species can remain healthy as long as areas of relatively undisturbed forest persist.

As with humans, salamanders need oxygen for efficient burning of sugar fuel to live, and that burning releases carbon dioxide. Unlike humans, though, red-backed salamanders lack lungs. They take in oxygen and release carbon dioxide through their skin and the lining of their mouths. This gas exchange requires moist skin, and the salamanders move deeper into the soil during dry spells to help keep their skin wet. Conversely, on damp nights some individuals emerge to hunt on the surface, and they have even been found climbing on vegetation when they can keep their skin appropriately hydrated.

The fancy name for a soil-tunneling life style is “fossorial.” You can glimpse the underfoot world of fossorial life by turning over logs and rocks to lift the roofs from the homes of soil salamanders, their prey and their predators. When you’ve had your look, be sure to return the rocks and logs to their place; this ensures that the moisture of the habitat isn’t compromised. Besides, if a peeping giant were looking down into your home, wouldn’t you want him or her to replace your roof?