The sometimes upside-down life of the nuthatch 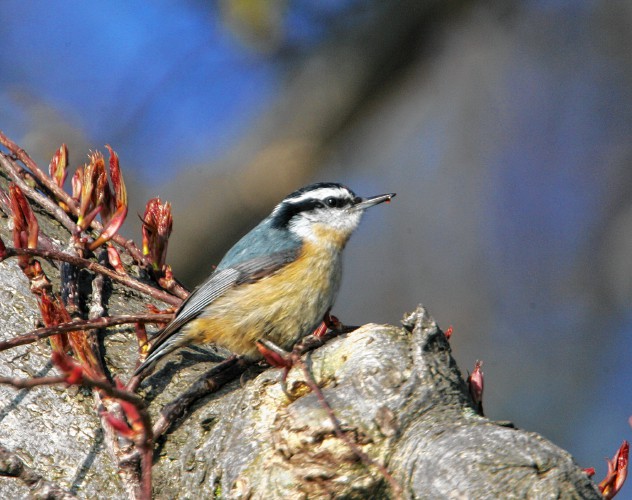 Confronted with the task of traveling up and down a tree or ladder, most humans approach both the ascent and the descent with legs down and head up. Most birds with a scansorial (climbing) lifestyle similarly move along the trunk of a tree with their tail down and head up.

Indeed, woodpeckers and several other groups of birds with similar locomotion have evolved stiff tail feathers that help to prop the birds in an upright position. One family of birds, though — the nuthatches — strikingly departs from the pattern. These short-tailed birds walk up or down tree trunks facing in the direction of movement, prompting poet Edith Thomas to ask of a nuthatch,

“How can you so reckless and fearless go,

Head upward, head downward, all one to you,

Zenith and nadir the same to your view?”

Nuthatches accomplish this feat thanks to their feet, relatively large and powerful feet for a small bird, which enable them to cling to bark in any orientation. A staggered, twisting gait on vertical surfaces allows a nuthatch to put its weight on one of those large feet while shifting the other. Narrow claws help these birds to find a grip in tiny bark crevasses that might not support a bird with wider claws.

Nuthatches, like other bark-foraging birds, often take advantage of gravity to reduce the energy cost of flight by flying from a high point on one tree to a lower spot on another tree. They then walk up and down the trunk and branches, usually with a net gain in elevation. As they walk up, nuthatches can rotate to face downward and probe bark furrows from above, perhaps finding insects that would be missed by birds that forage only while facing upward on the bark.

In the colder months, when insects are less available, nuthatches depend to a large extent on seeds for nourishment. A nuthatch wedges large seeds into a bark crevasse or the crotch of a branch and then hammers with its bill to get access to the kernel — thus the name “nuthatch” and the old (but now differently applied) name “nutjobber.” 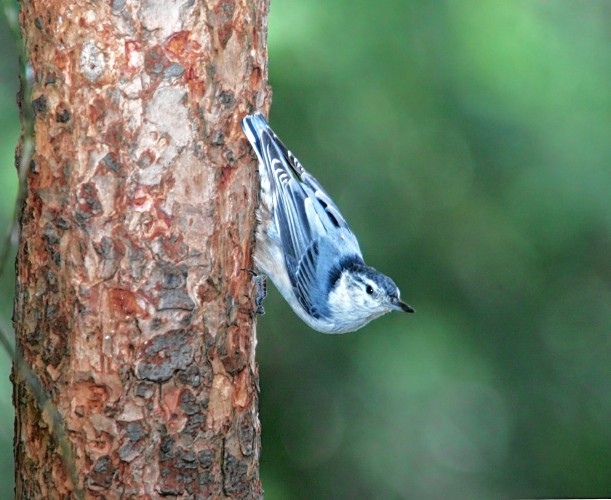 Two species of nuthatch occur here in western Massachusetts. The common white-breasted nuthatch, with its prominent white cheek and eponymous white breast, is familiar to many people with backyard bird-feeders. When not feasting on free sunflower seeds, this species “hatches” acorns and similar nuts.

The tiny red-breasted nuthatch, about half the bulk of its larger relative, is less familiar to many people. This species is readily identified by its prominent facial stripes and orangish undersides. A specialist in extracting seeds from conifer cones, this bird breeds rather locally here, but it is much more common in northern New England and across much of Canada.

In years when the cone crop fails farther north, red-breasted nuthatches move in large numbers to the south of their breeding range (in many cases crossing national boundaries without visas or work permits). This winter, with such a cone failure north of us, seems to be shaping up to be such an “invasion” year, with many individuals of this species already being reported in locations where they are normally quite uncommon.

Red-breasted nuthatches are among the relatively few birds known to use tools. Like other nuthatches they nest in cavities in trees, but they have the distinctive behavior of lining the nest opening with conifer resin, apparently as a gummy defense against predators.

Watch both for the locally common white-breasted nuthatch and for its daintier and more colorful red-breasted cousin. Both species often visit feeders and move through the winter woods in the company of chickadees and other small birds. This year may provide an unusual opportunity to see the red-breasted nuthatch that visits us in large numbers only once every few years.

David Spector is a former board president of the Hitchcock Center for the Environment and teaches biology at Central Connecticut State University in New Britain, Connecticut. For a report on seed crops north of us and predictions of movements of some birds this winter, see http://tinyurl.com/earthmatters-22.

One response to “The sometimes upside-down life of the nuthatch”