The tundra birds of Hadley 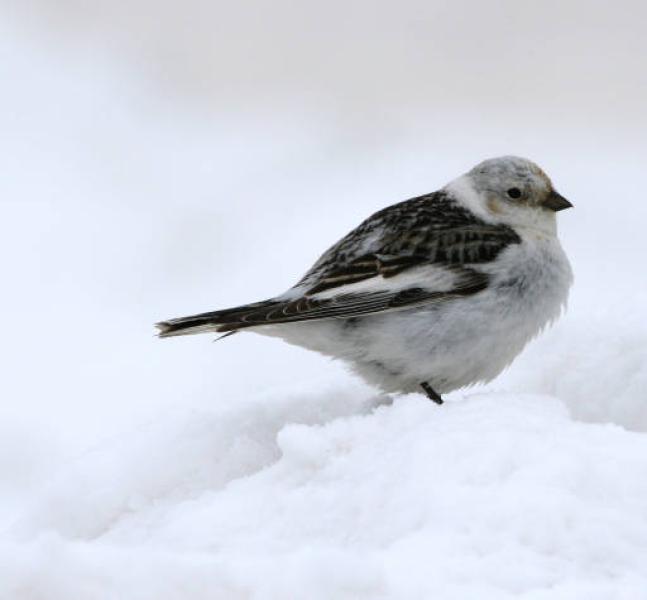 The snow-covered ground stretches for acres around me. The bitterly cold wind makes my eyes water. I blink the water away so I can identify the birds in front of me, birds that breed in places like this — flat, treeless, cold places. They are tundra nesters: the snow bunting, the Lapland longspur, the American pipit, and the northern horned lark.

But I am not in the tundra. I am in Hadley.

Those of us who venture beyond the Route 9 corridor know that Hadley is much more than malls and traffic. Bird enthusiasts go to Hadley for that flat, treeless habitat. During the breeding season, grassland birds like the eastern meadowlark and bobolink nest in grassy areas. During migration, muddy spots provide a stopping place for shorebirds such as killdeer and various sandpipers. Now, in winter, this area is as close as Hampshire County comes to the far north, birds included. 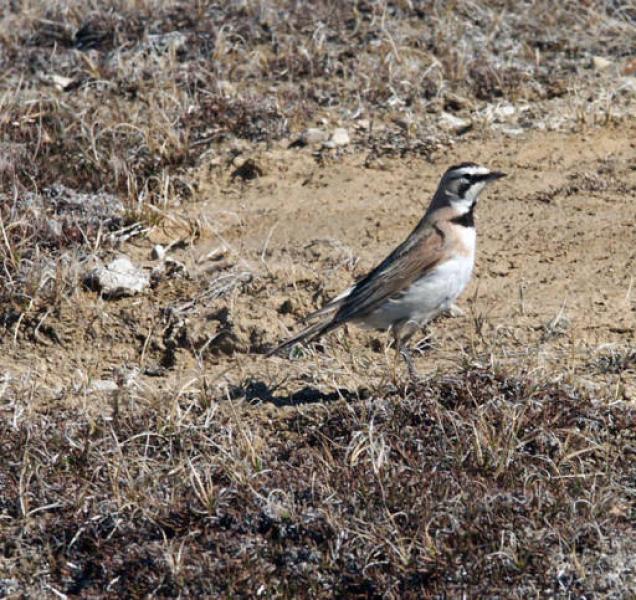 At first glance the birds usually appear nondescript. In flight, the snow bunting’s white wing patches might be the first conspicuous field mark distinguishing one species from the others. The horned larks, if seen well, have yellow faces with black masks and collars. American pipits distinguish themselves with wagging tails and heavily streaked breasts; they usually leave our area to winter farther south once the ground freezes and extensive snow cover appears. The rare Lapland longspur has a reddish wing patch and a triangular black-edged patch on each cheek. The four species are easier to detect by their flight calls: the quiet downward tinkling of the lark, the short emphatic trill of the bunting, the scratchy two-part call of the pipit (which, with a little imagination, sounds like the bird is saying its name “pi-pit”), and the single musical chirp of the longspur.

Several patches of suitable habitat exist in Hampshire County. East Meadows in Northampton is a well-known birding destination. The Arcadia Meadows, or West Meadows, also in Northampton, are managed by the Massachusetts Audubon Society’s Arcadia Wildlife Sanctuary for birds and other wildlife. In Hadley, the U.S. Fish and Wildlife Service similarly manages habitat along Moody Bridge Road. The fields and pastures along Hadley’s South Maple Street and Mill Valley Road have harbored many interesting bird species. But perhaps the most exciting area, at least this winter, has been the Hadley Honeypot.

The name comes most immediately from Honeypot Road, which runs through two large agricultural fields. Wikipedia defines a honeypot as a popular tourist attraction, likening crowds of visitors to bees swarming around their hive.

However, in New England’s tradition of humor and sarcasm, trucks carrying raw sewage or manure were nicknamed “honey wagons” in honor of their “sweet” smell, and roads named Honeypot generally led to pig farms and similarly aromatic destinations. Hadley’s Honeypot Road was allegedly named for the farmers who hauled massive wagonloads of manure out there every spring to fertilize their fields.

But that manure, though it might disagree with our noses, can be a gold mine for ground-feeding birds in the winter. Food at ground level becomes scarce when insects and worms die back or retreat from the cold, even scarcer when the ground freezes, and almost impossible to find when the ground is snow-covered. But if a farmer spreads manure on his fields in the winter, this lays out a buffet for the birds. The manure is unfrozen, even warm from decomposition, unlike the ground beneath. The mammals that generate the manure eat plants and digest leaves, but seeds often pass through their systems mostly intact.

Manure is also a rich breeding ground for flies, beetles and other invertebrates that are otherwise very difficult for birds to find in this season. One cornfield along Mill Valley Road was spread with manure in mid-December and attracted about 300 horned larks and 20 American pipits just in time for the local Christmas Bird Count. So, while manure makes part of Hadley a honeypot in the ironic New Englander sense, for wintering birds from the tundra it also can produce a honeypot more like Wikipedia’s definition.

This winter the Hadley Honeypot was buzzing with more than the usual species. A gyrfalcon, the Arctic’s top aerial predator, very rarely seen south of Canada, appeared in early December and has been erratically spotted since. Cemetery Road, more often used as a Route 9 bypass, was instead backed up with falcon-chasing birders. Most of them missed the gyrfalcon but were rewarded with views of up to three more common species of falcon, or a rough-legged hawk, or one of the four owl species that were seen around the Honeypot in early January, or a locally rare clay-colored sparrow. At least for a while, thanks to its tundra birds, the Honeypot attracted swarms of human visitors like bees to a hive.

Joshua Rose is a naturalist who lives in Amherst. For more information about the birds mentioned in this article, visit the resource library at the Hitchcock Center, or look them up at Cornell University’s www.allaboutbirds.org/guide/search.