The wisdom of trees in winter

By Lawrence J. Winship for the Gazette

In winter, tree branches that so recently held leaves up against the wind and sky are revealed in sharp relief against the gray clouds. We see not only the delicate tracery and complex interplay of stem and branch, but also the scars of winter storms and of battles with insects and disease. William Carlos Williams (1882-1963) draws the attention of our mind’s eye so well: 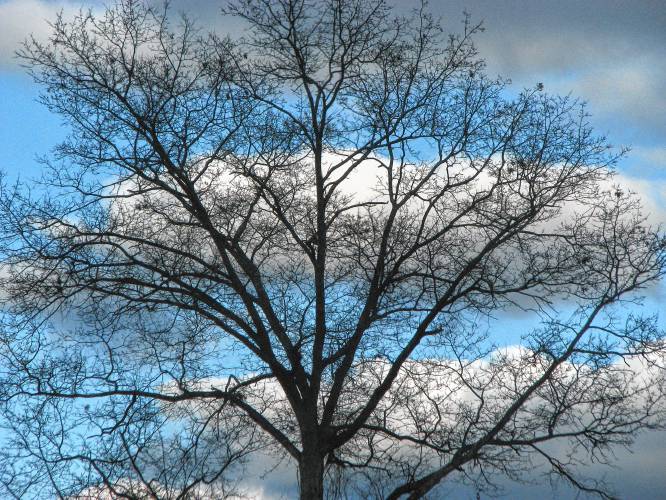 The stark, denuded branches of a tree in winter, dormant but structured to be ready to spring back to vibrant life. CONTRIBUTED/Rebecca Reid

All the complicated details

Thus having prepared their buds

against a sure winter

stand sleeping in the cold.

What is the wisdom shown by “wise trees”? Is it perhaps that they appear to cease striving and simply endure because growth is made impossible by the “sure” arrival of cold, of scarce and pale light, and of water frozen solid? Or might the verse call to mind the “wisdom” of genetic information encoded in the tree’s DNA?

This “wisdom” instructs cells in the tree buds to produce a coating of waxy scales that protect the buds from cold and drought, protecting the future of the tree. On each forest giant, thousands of buds contain millions of cells intricately organized into highly compressed shoots, ready to explode out into new branches and leaves.

Their cells are protected against frost damage by antifreeze specially made for the purpose. The degree of protection varies by species and even by population, such that the freezing point for tree cells depends on latitude. “Sleeping,” yes, but protected and ready for action.

Or does the poem allude to the remarkable complexes of plant proteins and hormones that measure temperature, the accumulation of cold days and the length of the night, thus ensuring that the “complicated details” of leaf life and death dance in time with our planet’s orbit around the sun?

Surely, here is “wisdom” indeed accumulated over millennia of springs, challenged by impartial, fickle weather. Why don’t trees “leaf out” during our now all-too-common February thaw? Perhaps they have not yet accumulated enough “cold time,” or the days are not yet long enough. To expand too soon is to risk freezing, losing precious time and resources. But wait too long and other trees will have first dibs on the newly strengthened sunlight.

I would like to think that those buds also vouchsafe yet another crucial wisdom, the genetic programs that determine the very structure of the tree. Each trunk, branch, twig, root and leaf began its existence as cells that grow out of a tiny dividing point on a shoot or a root. And the way those divisions and growth proceed is specific to each type of tree. The thick, ladder-like branches of the ash, the drooping zig-zag branches of the elm, and the annual whorls of pine boughs all have their origins in the organization of that dividing point.

In winter, we can easily see the legacy of specific growth patterns revealed in tree branches. On some trees, branches are decidedly opposite each other along the trunk. Others alternate from one side to the other, sometimes in one plane, sometimes in a characteristic spiral along the stem.

And some trees seem to play games with us, like maples that allow one of a pair of twigs to die such that the overall effect is to mimic other species. But don’t be fooled — buds tell the tree’s life story every time, as do the scars left behind by leaves when they fall.

Other tree growth patterns, such as bark texture, become more obvious in winter — the white bark of the paper birch, the flaky papery bark of the river birch, the dark, striated bark of the black birch. Trees grown in open sun have short nodes between branch points, while shaded branches extend eagerly to reach the sun.

These features add up to the three B’s of winter tree identification — branching, buds and bark. So, even at a distance, one can make a pretty good guess at a tree’s species.

Winter silhouettes reveal more than a tree’s species. Repeated millions of times over hundreds of years, a tree’s genetic program spins out lines of cells into twigs, branches and trunks, all according to a regular plan. But it’s the way that a tree’s plan interacts with other trees, insects and the weather that brings the tree to its ultimate shape.

For example, say a pine weevil kills a pine’s “leader” — its top shoot. The tree doesn’t die. Instead, with the plant hormones from the dead tip gone, another branch elongates and bends upwards to take up the cause, reiterating the crown and continuing the upward climb to the sun. Yet the mark of the weevil remains in the crook of the trunk and perhaps a spreading, bushy-shaped “cabbage” pine with a wide multi-trunk stem is the result.

So it is that trees of a particular species become recognizable individuals, surviving through “tree wisdom,” revealing their heritage and history to us on winter walks.