Then, now, and in an uncertain future

On my desk is an old Kodak photo of my Dad and me, standing in front of our home. With snow piled high, we had just finished digging out our driveway — my snow shovel proudly displayed.

On the edge of the photograph is stamped 1961, so I was 10 years old. While working at my desk I sometimes drift off into the photo with memories of sledding, snowball fights, snow huts, maple syrup on snow, skiing and coveted school snow days. There are few weather events like snowstorms that are as intertwined with our culture and lifestyle, yet they have humble beginnings.

At the core of a snow crystal is a speck of material like sand, soot or pollen. In clouds, water vapor comes into contact with the speck and condenses, changing the vapor into liquid water. If the air temperature is below freezing, the droplet freezes. The result is always a six-armed ice crystal based on the molecular structure of water. 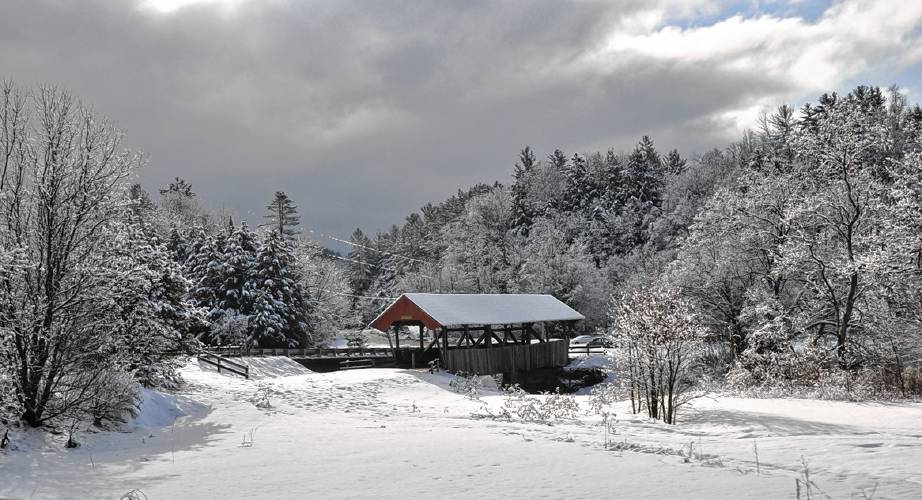 As a crystal drifts throughout the cloud it encounters different levels of humidity and varying temperatures. While six arms are constant, each arm can take on a unique shape as the crystal passes through these changing conditions. As crystals circulate they come into contact with other crystals, clump together, grow heavier and fall from the cloud as a snowflake.

The apparent color of snow, white, is not what it seems. Snow crystals are actually translucent and don’t absorb a color of the spectrum that would give them a color. Instead, they bend and scatter sunlight. Sunlight reflected by the crystals of a snowflake ultimately leaves the snowflake as it entered, white.

The structure of snowflakes affects the environment in other ways. The open spaces between crystals in a new snowflake can be up to 95% of its area, allowing air to be trapped in the fallen snow. The air spaces of a fresh snow absorbs and dampens sound, making for a quieter landscape. Trapped air also has an insulating quality since it is a poor conductor of heat. A blanket of snow reduces heat loss from the ground and tempers the penetration of frost.

This insulating quality allows a snow hut to retain heat, maintaining a warmer temperature inside than out. A blanket of fresh snow also reflects up to 95% of the sunlight hitting its surface. As a result it has a high albedo, or reflectivity rate, when compared to the darker, heat-absorbing surface of bare ground. 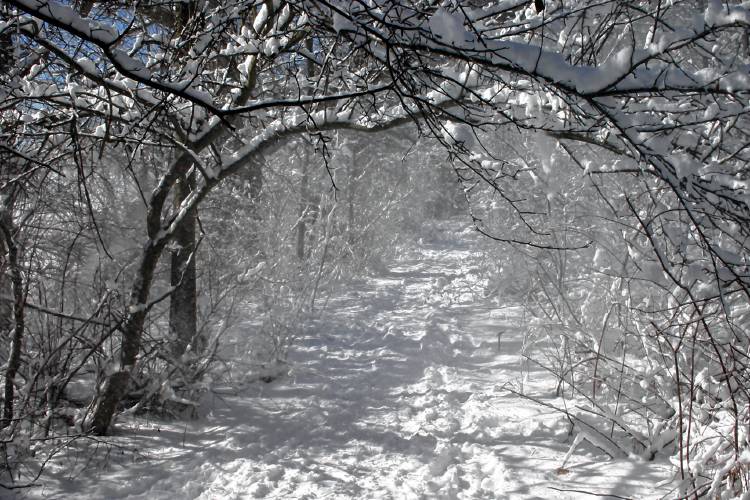 A snowy path in the woods in the Larch Hill Conservation Area in Amherst. REBECCA REID

When we talk about snow, climate change soon comes into the conversation. The Arctic and Western U.S. are two high-visibility examples. With the dramatic loss of Arctic ice due to warming, a vast platform for snow is lost, and thus millions of square miles of reflectivity are lost. The darker ocean surface absorbs the sunlight’s heat, warming the ocean. More ice melts, snow and reflectivity further decline, as the cycle of warming continues.

For over a decade snow, and resulting snowpack, has been declining in the western U.S. Through snowpack, water is stored during the winter wet season and released during the warmer dry season, recharging the Rio Grande and Colorado rivers that provide water for agriculture and millions of people. A 2018 paper in the journal “Nature” reported that the loss of snowpack has contributed to the West’s multiyear drought and is a factor in the extreme fires that are occurring.

New England has not escaped changes in snowfall. Winters are getting warmer, starting later and ending earlier. While extreme snowfall events are increasing, the actual annual snowfall amount is declining. With warmer temperatures, snow cover between extreme events is declining and being replaced with freezing rain. The loss of snow’s insulation allows colder temperatures and frost to penetrate deeper into the ground, amplifying the impact of freeze-thaw cycles on soil, forest floor and human ecosystems.

In spite of all the complexities of climate change, we will still have gentle snows in coming months. Our fields and woods will be transformed into the quintessential winter landscape described by Robert Frost as he stopped “by the woods on a snowy evening. … The only other sounds the sweep of easy wind and downy flake.”

Bringing the memories of that 10-year-old boy with me, I’ll go out in the next storm and enjoy the quiet and softness of falling snow.

Tom Litwin is a conservation biologist and former director of the Clark Science Center at Smith College. He is retired from the Jackson Laboratory in Bar Harbor, Maine and Farmington, Conn., where he served as the Vice President for Education, and continues as a Visiting Scholar.