They’re shacking up for the winter — in your house 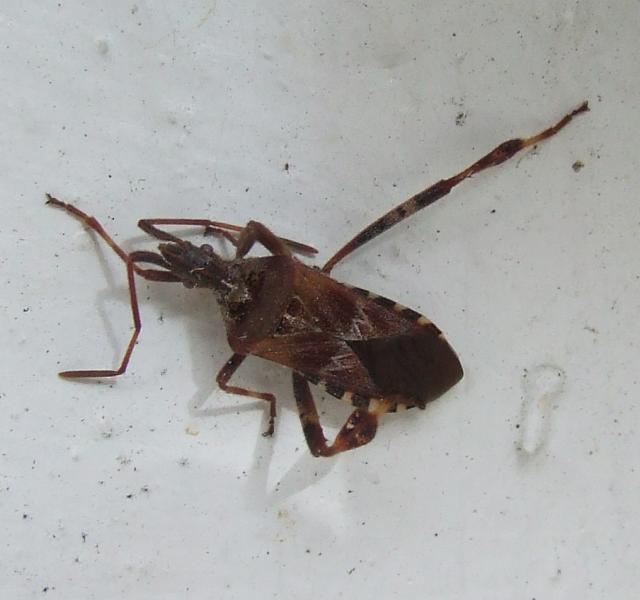 “Ack, there’s another one!” I exclaim, as I reach for the rather homely and lethargic brown bug clinging to my bathroom mirror. You probably know of what bug I speak: the reddish-brown, ¾-inch-long insect with long, flanged legs, antennae to match, and a boxy, somewhat flattened body. The one that, when you squish it or attempt to usher it politely outdoors, emits a strong odor of new-mown grass soaked in Pine-Sol. This species is one of many insects trying to carve out a cozy niche for itself so it can survive the winter. You may be encountering this and a few other unwanted roommates as you batten down the hatches for the cold months. Let’s learn about a few of our new tiny tenants.

Our friendly, stinky bug is not actually a “stink bug” in the true, scientific sense. It’s actually the Western conifer seed bug, Leptoglossus occidentalis, which is a member of a different branch of the insect family tree. This species has been migrating slowly to New England from the Pacific Northwest over the past century (I guess they like our coffee better!). Leptoglossus whiles away its summer days feeding on pine seeds deep inside pine cones using its long, straw-like proboscis. Most of these bugs overwinter under conifer bark, but others want in to your house. They won’t chew on or breed inside your house, give you a disease or indicate anything about your cleanliness. They can poke their long noses at you ineffectually when threatened. And, of course, there’s that smell.

Leave them to their own devices in your home, and they will meet their doom in the dry, conifer-free environment. You can try to avert their entry, but they are expert hitchhikers on the houseplants you bring inside, firewood and, yes, yourself. So take a deep breath and hope they scare themselves to death by looking in the bathroom mirror.

Another somewhat smelly denizen of our homes is the Asian ladybird beetle (Harmonia axyridis; think “acrid”). These adorable, ¼-inch, red/orange-and-black beetles are fearsome predators on aphids, scales and other insects. Introduced from Asia, this species was intentionally released many times throughout the U. S. to help keep pests on trees and crops in check. But today this “biocontrol” is out of control: in some parts of the country, these imports are now the dominant ladybird beetle species, having displaced our natives. They are attracted to sunny sides of houses — an apocryphal legend has it that white walls remind them of the steep cliffs of their native China — and congregate in large numbers, usually on warm days following the first cold snap of autumn. Being small, they can make their way into the home through tiny cracks and gaps in windows and siding; pesticides and light traps do little to keep them out. Like seed bugs, they’re mostly harmless, lethargically flying about, looking for a place to hibernate. They don’t breed indoors; the same adults from the fall wake up in spring and beg to get out. Squeeze one, though, and you’ll be greeted with a splash of yellow fluid and a musky odor — they actually bleed in self-defense! If you have large numbers of beetles, the best way to whack them is to vac them.

Another insect that would happily share your home is the brown wasp, Polistes fuscatus. This native, dark brown wasp is nearly an inch long, and it flies somewhat disconcertingly like a B-52 bomber, lumbering around your yard on wings scarcely able to hold it aloft. It typically builds mushroom-shaped paper nests under eaves and other sheltered places. Like other wasps, it is a social animal, but its small colonies have a simple hierarchy, with a few female workers presided over by an aggressive queen.

The first cohort of sister-workers are infertile and labor in service of the colony. As the season progresses, new larvae hatch into fertile females and males, which mate to create a new generation of pregnant queens-to-be. The old queen and colony die, while the young queens overwinter, sometimes in warm parts of your house. In spring, these queens will found new colonies. In summer, brown wasps act as incidental pollinators as they gather nectar, and help to keep populations of smaller, plant-feeding insects in check. They also make a tasty morsel for birds. Yes, these wasps can reluctantly sting when jostled (they typically prefer to fly away when swatted), but in my experience they are far less painful than yellow-jackets or hornets. They mainly seem scary due to their big bodies and clumsy flight patterns.

So when everything appears lifeless outdoors in the dead of winter, look on the bright side! You’ll have plenty of company indoors. And I didn’t even mention the cluster flies, mice and milk snakes that make up the food chain in my cozy basement. I’m thinking of proclaiming my house a national park.

Elizabeth Farnsworth, senior research ecologist at the New England Wild Flower Society, shares her home in Royalston with a cornucopia of critters. For information about these and other insects, visit www.bugguide.net — a hive abuzz with information on little things, with and without wings.