Those Busy, Useful and Amazing Ants 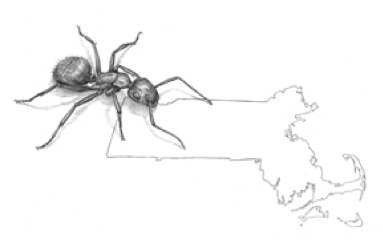 When we lived in Holyoke, we looked forward to the annual fall migration of winged things: birds, monarch butterflies and… ants. On a warm, autumn evening every year, we would sit on our deck and watch platoons of ant queens lining up for take-off, like jets at Logan Airport. These insects weren’t launching off to exotic locales in the tropics like birds and butterflies. Instead, each hopeful queen, replete with fertilized eggs, was setting out on a wing and a prayer to find a perfect spot to found a new colony, perhaps only a few hundred feet from the nest where she was born. Of all the queens taking flight, perhaps only one in a million would make a new nest; the rest would serve to fatten up birds

for their migration or bears for their hibernation. But what good are ants, anyway, beyond creating a swarming spectacle, being food for other creatures, and raiding our own kitchen larders and picnics?

A lot of good, that’s what! The nests those queens create foster thousands of worker ants whose activities replenish and nourish our rich soils of forest and farm, generating an inch of new topsoil every 250 years. These busy garbage-collectors process more detritus than earthworms, turning literally tons of dead stuff into living compost. Ants also help disperse the seeds of many of our most beautiful spring-flowering plants, including trilliums and wild ginger. While collecting and feeding on the protein-rich appendages (“eliaosomes”) attached to these seeds, ants move the seeds to fertile planting sites around their nests, where new plants can happily germinate and grow.

Plus, ants have a lot to teach us about social networking. Each ant colony is truly social (“eusocial” in the parlance of biologists), with dedicated division of labor, cooperative child-rearing, and overlapping generations of seniors and juveniles. If you’ve seen the animated movie, “Antz,” you get the gist of the jobs ants perform. However, all the workers are female, so that Woody Allen voice-over is a little inaccurate: Male ants—really gnarly-looking fellows—do no nest work and exist only to mate but once.

The winged queen you see in fall will mate with males from her own or another nest and establish a new colony, giving birth to a growing cadre of workers who will bring her food and protect her while she delivers thousands more baby workers over the years. All her worker-daughters are sisters, and thus each have a genetic stake in ensuring the colony is well provisioned. A colony may survive for decades until it is disturbed (by a marauding bear, perhaps), or taken over by parasitic or slave-making ants of other species. If neither of these things happens, the queen eventually ages, signaling that new queens should be produced to restart a new nest elsewhere. It really does take a village.

You won’t believe this until you see it, but ants are aesthetically pleasing, too. There are at least 130 species in New England, with still more to be discovered, and they come in a rainbow of colors (reds, yellows, browns, blacks, even purplish!), some festooned with luxuriant silver hairs or frilly skirts around their abdomens. A few species are perfumed with the fragrant scent of citronella or ripe bananas.

So next time you see a tiny worker scurrying across your kitchen floor, don’t stomp on her! Pick her up, pin her legs gently between your thumb and forefinger, and look at her through a magnifying glass. She won’t bite or sting (even if she tries, you probably won’t feel it); most times, she’ll play dead or look at you in dazed curiosity. Or, follow her back to her nest, which is nearly always safely outside your home (the carpenter ants that all homeowners fear only nest inside in already-rotting, moist wood—they’re symptoms, not causes, of deteriorating beams). Watch her and her nest-mates as they follow scent trails, forage for food, tickle each other’s antennae to recognize sisters or occasionally mount a dramatic raid on another nest. They’ve been around millions of years before we humans ever got “social,” and we have a lot to learn from them.

Elizabeth Farnsworth is a biologist and illustrator/co-author, with Aaron Ellison, Nicholas Gotelli, and Gary Alpert, of A Field Guide to the Ants of New England.