In June 1919, aviators John Alcock and Arthur Brown flew in a Vickers Vimy airplane from Newfoundland to Ireland in what is often considered the first nonstop transatlantic flight. If instead of heading east they had flown south, they would have traversed an even longer transatlantic route across the western Atlantic Ocean to northern South America.

They would not, though, have been the first to accomplish that flight.

Each fall, tens of millions of birds leave eastern Canada and the northeastern United States heading nonstop to their South American homes, which they have done for many thousands of years before Alcock and Brown’s celebrated feat.

Most of the tropical birds that visit North America to breed return south in the fall through the southern United States. Many follow the western coast of the Gulf of Mexico through Texas, while others head through Florida to the West Indies or Yucatán, and some fly straight across the Gulf. Relatively few species fly the direct route across the western Atlantic from northeastern North America to northern South America.

You can observe flight patterns by watching the weather radar at night (when most birds migrate). On most late summer and fall nights with heavy migration, the flight direction in the Northeast is northeast to southwest, roughly parallel to the coastline. On some nights, though, radar shows many birds headed south, directly over the Atlantic. The most numerous of these direct migrants is probably the blackpoll warbler. 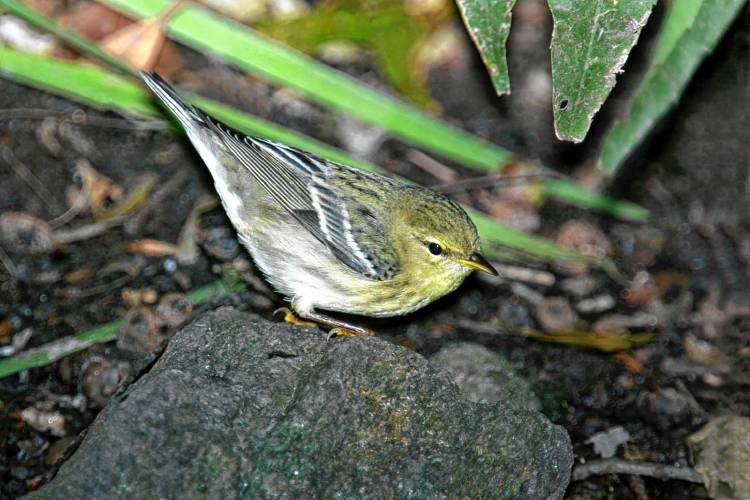 A blackpoll warbler in the fall, fattening for its flight to South America. It does not have the black cap of the spring male that gives the species its name. John Van de Graaff

Blackpoll warblers breed abundantly in boreal forest from Alaska to Newfoundland and, in small numbers, as far south as Mount Greylock here in western Massachusetts. The population of this species is estimated to be about 60 million birds, and in September and October most of those move to the eastern states and provinces, from Virginia to Nova Scotia. These birds then pause for three to four weeks as they eat and convert insects and fruits to fat to fuel their long flight.

A blackpoll warbler arriving in September in western Massachusetts from its northern breeding grounds is likely to measure close to its lean body weight of about 11 grams (roughly a third of an ounce). By the time it leaves for South America, it will have almost doubled its bulk to about 20 grams. Most of that gain will be lost over 3½ days of nonstop flying to the bird’s South American home.

How does a tiny bird find its way across open ocean between two continents?

Blackpoll warblers probably use a combination of the stellar, solar and magnetic navigation systems that scientists have documented for other birds. These birds typically leave after a cold front, when they are aided by the northwest tail winds; as they enter the tropics they encounter northeast trade winds that help to move them on to South America.

Throughout their flight they’re probably within earshot of others of their species who often give short call notes — it’s thought that adjusting their bearing to that of other birds might allow averaging their direction to eliminate small individual errors in orientation.

Whatever the details of navigation, most go the distance successfully. Some individuals come down on Bermuda or the islands of the Lesser Antilles, many undoubtedly drown in the ocean, and a handful of warblers inadvertently duplicate that 1919 feat and wind up in Europe. 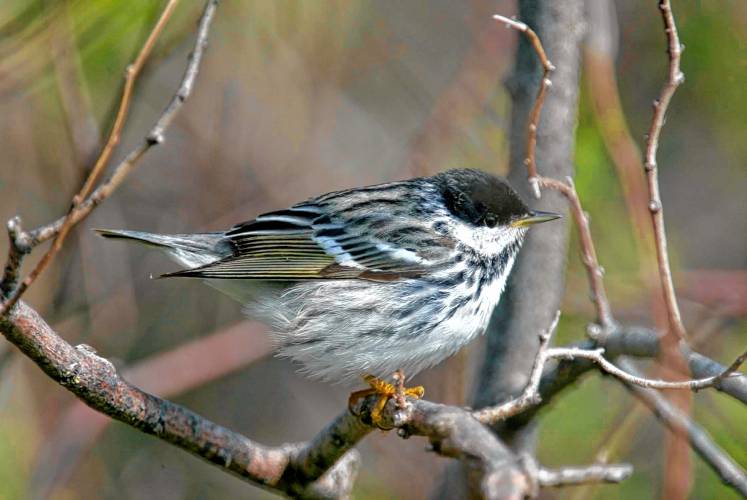 A blackpoll warbler in the spring, showing the black cap that gives the species its name. John Van de Graaff

The blackpoll warbler gets its name from the crisp black crown of the breeding male (“poll” in this sense meaning “top or back of the head”). At this time of year, though, all blackpoll warblers, female and male, old and young, are rather nondescript yellowish warblers with white wing-bars and dull streaking. Close attention to detail, informed by a good field guide, can allow you to distinguish the fall blackpoll warbler from the similar bay-breasted and pine warblers.

Human travel is time-consuming and expensive. In current conditions, travel to see blackpoll warblers is even more difficult than usual, with restrictions to reduce virus spread and political differences between the regimes in Washington and Caracas.

You needn’t, though, trek into a Canadian boreal forest or fly to a Venezuelan tropical forest to see this tropical/boreal bird. Now, in September or October, any tree here in western Massachusetts could serve as a rest stop for a fattening blackpoll warbler as it prepares to launch on its annual transatlantic voyage.