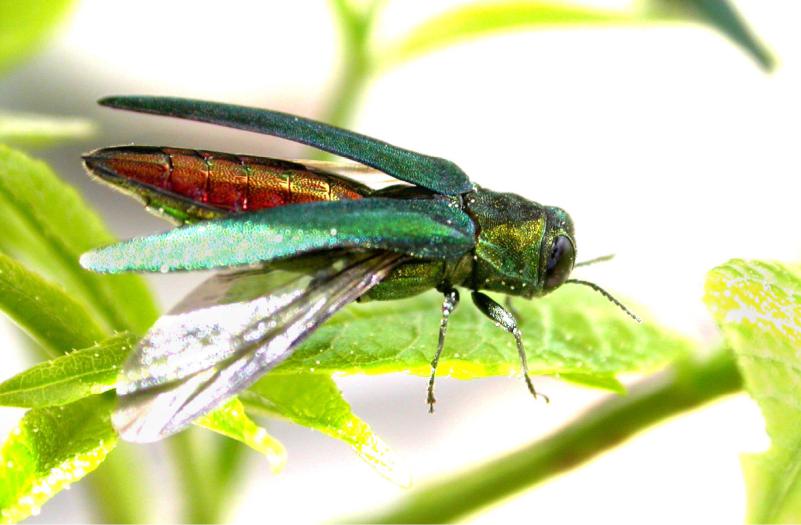 U.S. Department of Agriculture
An adult emerald ash borer. When the wings are folded and covered, the beetle shows only the bright green color

Yes, it’s the emerald ash borer, that infamous pest from Asia, whose larval feeding tunnels can girdle the inner bark of an ash tree, cutting off its supply of nutrients and water and eventually starving the tree to death.

The adult emerald ash borer (EAB), as its name suggests, is a bright, iridescent green beetle, about ⅓ inch long. It has a coppery-red upper abdomen that is often hidden under its wings.

Although the adult EAB does chew on the leaves of ash trees, this is not the primary source of trouble. Rather, the female EAB, which lives for about six weeks, can lay anywhere from 40 to 200 eggs in the tree’s bark. Fertilized eggs hatch about two weeks later, after which the larvae chew tunnels through the outer bark and into the inner bark. This is the real source of trouble for the tree because those serpentine tunnels disrupt the tree’s nutrient system, eventually causing it to die.

Like most non-native invasive species, the EAB, though certainly a pest for all North American ash tree species, is not a huge problem in its home range of Japan, Korea, northern China and eastern Russia. This is because in its homeland it co-evolved with both resistant trees and native predators, both of which serve to keep its population in check. However, its arrival in the West in 2002, most likely as an accidental import on shipping materials such as packing crates, was unaccompanied by any of these natural predators.

Since its arrival in Michigan near the shores of Lake Erie, this tiny insect has proceeded to wreak havoc on tens of millions of ash trees in the Midwestern and Eastern states, as well as northward into the eastern provinces of Canada. In fact, the states of Michigan, Arkansas, Colorado, Connecticut, Georgia, Illinois, Indiana, Iowa, Kansas, Kentucky, Louisiana, Maryland, Massachusetts, Minnesota, Missouri, New Hampshire, New Jersey, New York, North Carolina, Ohio, Pennsylvania, Tennessee, Virginia, West Virginia and Wisconsin, along with the provinces of Ontario and Quebec, have banded together in an international effort to attempt to understand, control and prevent the spread of this insect, and to educate and involve the public in stemming its damage. 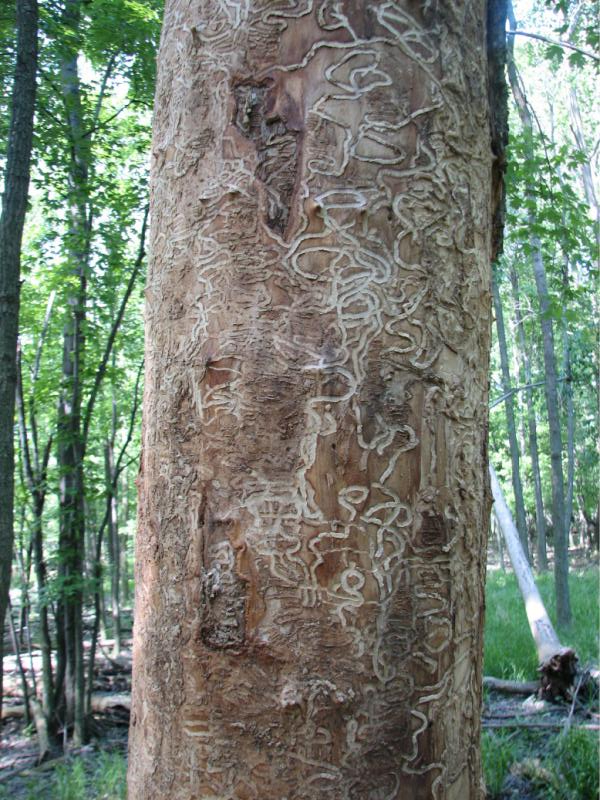 Considered by some to be the most destructive pest in North America, the EAB was found locally in Berkshire County, in 2012, and in Essex County in 2013. Efforts to control its spread include the introduction of host-specific parasitic wasps (meaning that these wasps, also from Asia, prey exclusively on EABs). Two species of wasps are being used as biological control agents: one, known as Tetrastichus planipennisi, attacks EAB larvae; and the other (Oobius agrili), attacks EAB eggs.

According to the Mass. Introduced Pests Outreach Project, a collaboration between the Massachusetts Department of Agricultural Resources and the UMass Extension Agriculture and Landscape Program, T. planipennisi eliminate up to 50 percent of EAB larvae, and O. agrili get rid of up to 60 percent of EAB eggs. If these wasps are successfully used in conjunction with each other, there could be a potential total reduction in EAB survival by 80 percent. Not bad for a bunch of wasps!

However, parasitic wasps are not the only weapon in the anti-EAB arsenal. Traps, tree removal, wood-moving quarantines and insecticides are other tools to help stop or slow the invasion.

For instance, while driving down a forested road, you may have noticed large, purple, triangle shaped objects dangling from trees alongside the road. These traps are used to determine the presence and/or to assess the extent of an infestation. EABs are attracted to a combination of the trap’s purple hue and its chemical lures, and then become stuck to a gluey substance, allowing scientists to estimate population size.

Insecticides are another control option, though these expensive and intensive methods are primarily used in urban areas and/or locations with a limited number of high-value trees. Systemic insecticides are generally either injected directly into the tree or applied to the soil around its base. Insecticide applications are effective for one to three years before re-application is needed.

Do you want to help keep EABs at bay?

One of the most important things is to do is avoid moving firewood from one region to another.

EABs do not generally travel very far under their own steam; rather, human transportation of wood around the region, state or country is a primary way that infestations spread. Pay attention to wood-moving quarantines, and only use local firewood for your campfires or woodstoves.

If you want to get more involved, there are many ways to help.

Check ash bark for characteristic D-shaped exit holes. (Remember, these will only be on ash trees.) Also, familiarize yourself with the appearance of adult beetles, which may be seen during the spring and summer. Report any potential sightings (along with a sample, if possible), to the Mass. Introduced Pests Outreach Project (www.massnrc.org/pests/eabreport.htm). There you will also find additional information and projects.

With everyone’s help, we can keep Massachusetts forests safe and healthy.

Reeve Gutsell is a volunteer at the Hitchcock Center for the Environment. She has a masters degree in resource management and conservation from Antioch University, and a masters in creative writing from Naropa University. To learn more about the EAB, visit www.emeraldashborer.info.