Tree’s death a part of life

It sits on the edge of the woods in what was once a hedgerow along the road. The woods have taken back the once-adjacent field, joining it with the hedgerow. Succession and time have run their course — pioneering poplar, birch and cherry giving way to the maples, oaks and beech of a mature forest.

It’s not much to look at, this big, old dead maple. As unflattering as the technical term for dead trees is — snag — they play a central role in the nutrient cycling of a forest ecosystem.

Most trees don’t die of old age, but through other factors including disease, insect infestation, wind and ice damage, drought or flooding. Over a decade, as the soil around this maple became wetter, it declined, shedding yellowed leaves early from failing limbs, and dropping limbs altogether.

Finally one spring no leaves appeared — it had died, marking the end of one incarnation and the beginning of another. The solace and celebration in losing this prominent old tree was in knowing that the nutrients that had nurtured a seed to seedling, sapling to mature tree, would now be given back through an improbable jigsaw puzzle of interactions.

For a number of seasons, the trill of red-bellied woodpeckers accompanied a pair coming and going from an excavated nest cavity. As insects, and their eggs and larvae, invaded the snag it was visited by chickadees, black-and-white warblers, pileated woodpeckers and white-breasted nuthatches prospecting for food through the sloughing bark. 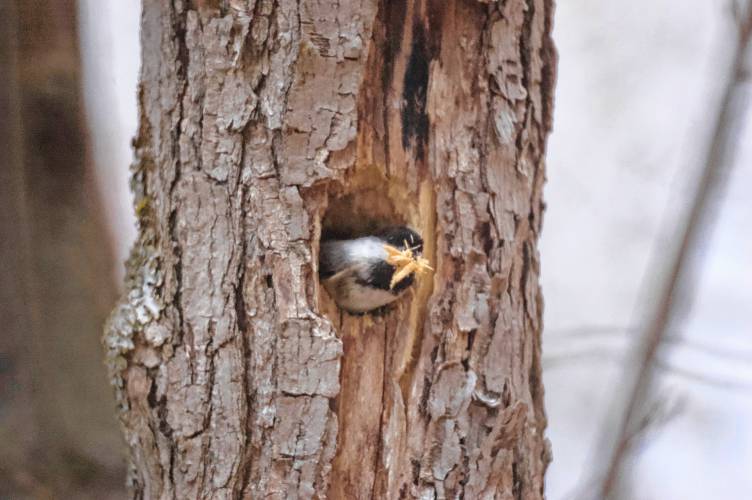 A chickadee makes its home in a dead tree trunk in Pelham. CONTRIBUTED/JOSHUA ROSE

House wrens explored existing nesting cavities; downy woodpeckers would excavate their own. I got a rare daytime look at a flying squirrel as it glided from a tree to the snag, disappearing into one of the growing number of cavities.

In its prime, the maple had an immense crown whose photosynthetic leaves linked its own growth to the global carbon cycle and forest floor. Using the energy of sunlight, its leaves removed carbon dioxide from the atmosphere, joining it with hydrogen and oxygen derived from water delivered by its roots.

The product, the sugar called glucose, was used as food by the tree’s cells to support a wide variety of processes, from the growth of branches and twigs to producing flowers and seeds. While oxygen was released back into the atmosphere, glucose was converted to starch and stored throughout the tree to be used as food at night, after leaf fall, or to energize leaf-out in the spring.

In addition to storing 75 percent of the tree’s food reserves, the root’s chemistry tapped into both earth and sky. Nitrogen gas in the atmosphere was converted by soil bacteria into a form the roots could absorb and use in a number life-sustaining processes. Weathered rocks released phosphorus, calcium, potassium, sulfur and magnesium, making them available to the tree through its roots.

Seeing “the forest through the trees,” a tree is a short-term storehouse of essential nutrients needed to secure the long-term future of the forest.

Making nutrients available beyond the life of a single tree requires the work of many players. Eventually the snag will be undermined by decay, collapsing to the forest floor as a rotting log. As unappealing as the topic of “rotting” may be, it is essential for the release of nutrients back into the forest ecosystem.

In his poem “The Wood Pile,” Robert Frost calls it “the slow smokeless burning of decay.”

Once the log is in contact with the ground, the process speeds up. Water enters more readily behind the bark; channels dug by boring insects direct moisture deeper into the wood, creating habitat for bacteria and fungi. In turn, these species break down the cellulose and lignin that give trees their rigid structure.

They not only derive food from this, but make wood more accessible to other feeders. Protozoa invade and feed on bacteria; millipedes and worms eat decaying wood; centipedes eat millipedes and worms. Where the log meets the organic layer of the forest floor, salamanders, shrews, moles and mice burrow, make tunnels and feed on insects and worms attracted to the log. Their activities begin the process of mixing the decaying log and released nutrients back into the forest soil.

Eventually the log will disappear, becoming an indistinguishable place on the forest floor. By chance a maple seed might whirligig its way to this spot. Using the seed’s starch stores, a tap root will sense the pull of the soil and a seedling will sprout, unveil a few leaves, and begin its push toward the sun.

Having watched this old maple through time and season, I take comfort in the rhythms and cycles that shaped its place in the forest. In these turbulent, sometimes chaotic times, it reminds me that something larger is at work. Spring is unfolding, renewal is underway, and the red-bellied woodpeckers are back on territory — solace and quiet celebration.

Tom Litwin is a conservation biologist and former director of the Clark Science Center at Smith College. He is retired from the Jackson Laboratory in Bar Harbor, Maine and Farmington, Connecticut, where he served as the vice president for education, and continues as a visiting scholar.