Undoing damage to the natural world 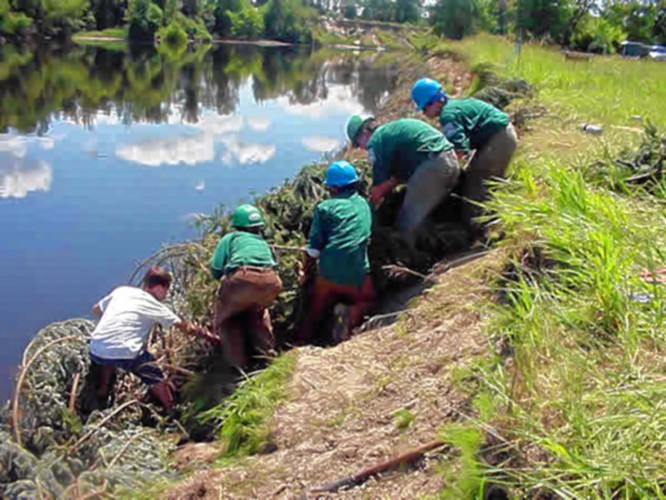 As readers of this column may be aware, a recent article in the Gazette highlighted Project Stream and the wetland restoration work at Mount Holyoke College in South Hadley. This project is a wonderful example of restoration ecology — the recovery of ecosystems that have been degraded, damaged or destroyed. In recent years, significant amounts of time, money and effort have been invested in projects like these around the country.

Efforts to change the natural environment to some state other than its current one have gone on as long as human beings have been using tools. The choice to build dwellings rather than to live in caves, for instance, or to raise crops and livestock rather than hunt and gather, are examples of how humans have modified their environment to better suit their needs.

Ecological restoration — the desire to return the environment to some earlier, less impacted version of the past — is a more recent impulse, however.

By the mid-1800s, the social, visual and ecological impacts of industrialization in the United States were rapidly becoming evident. This led to the beginning of the conservation movement, spearheaded by such notables as John Muir, who was instrumental in the passage of the National Parks Bill in 1890.

From the seeds of these early efforts to conserve and protect the landscape later sprang the environmental restoration movement, focused on attempts to undo at least some of humanity’s damage to the natural world.

Rivers, wetlands and coastal areas are often a primary focus of restoration efforts, as they are critical for flood control, water quality and habitat for a wide variety of species. However, restoration can occur in almost any habitat, including farmland and urbanized areas.

Many factors come into play when planning an environmental restoration project. Geography and the proximity of current or future development must be considered, and, of course, available funding. Creating a flood-absorbing wetland complex in a flat, rural, wooded area is very different from managing a stream that is relatively steep or one that is encased in a concrete channel surrounded by city streets, which has little capacity to absorb excess rain or floodwater.

Special problems also exist with coastal projects, including situations where information on tidal elevation and ranges is often inaccurate, where restoration locations may be accessible only by boat, where sediment can be soft and deep, and where wind, weather and tidal conditions change moment to moment.

In spite of challenges like these, ecological restoration is a rapidly burgeoning industry, in part due to the potential cost savings provided by a well-functioning natural ecosystem. Natural economics, a field of study that endeavors to assign economic value to ecosystem services such as the flood control and sediment absorption provided by a healthy wetland complex, or the recreational value in tourist dollars provided by a clean river estimates that ecosystem services are extremely valuable. A 2014 report by the Massachusetts Department of Environmental Conservation estimated that, over the course of 30 years, a creek restoration project in Salisbury would save $2.5 million in reduced flood damage, an estuary restoration project in Chatham and Harwich would save over $3.9 million in water quality costs, a salt marsh restoration project in Quincy would save over $138,000 in greenhouse gas damages through carbon sequestration, and a river restoration project in Wellfleet and Truro would increase local property values by $10.4 million.

What about here in the Valley?

The state recently added 11 new “priority projects” to more than 60 that were already listed for our area. One of the new projects is a floodplain restoration in the Arcadia Wildlife Sanctuary in Easthampton, to be conducted in conjunction with Massachusetts Audubon.

Another is the Fearing Brook Revitalization Project in Amherst, which will include a variety of habitat enhancements to this highly impacted stream.

State government is not the only player in ecological restoration. The federal government also supports environmental restoration projects, such as the Silvio O. Conte Refuge’s Fort River handicapped access trail and ongoing invasive species removal efforts throughout the refuge. Towns and private organizations such as Mount Holyoke College, mentioned earlier, can also either do the work themselves or hire contractors.

Individual citizens and small groups, although they may lack the expertise, economic resources and/or landscaping equipment available to larger operations, can conduct smaller-scale environmental restoration projects on their own sites by cleaning up trash, improving soil health through organic lawn and gardening practices, removing invasive species and replanting native species.

Whether through direct participation, tax dollars or private donations, there’s no shortage of work to be done. You can participate directly in these ongoing efforts to restore our planet or otherwise support them.

Reeve Gutsell is a volunteer at the Hitchcock Center for the Environment. She has a master’s degree in resource management and conservation from Antioch University in Ohio. She enjoys spending as much time as possible exploring the Pioneer Valley.

The story about the Mount Holyoke College restoration project is here.