Valley views through the artist’s lens 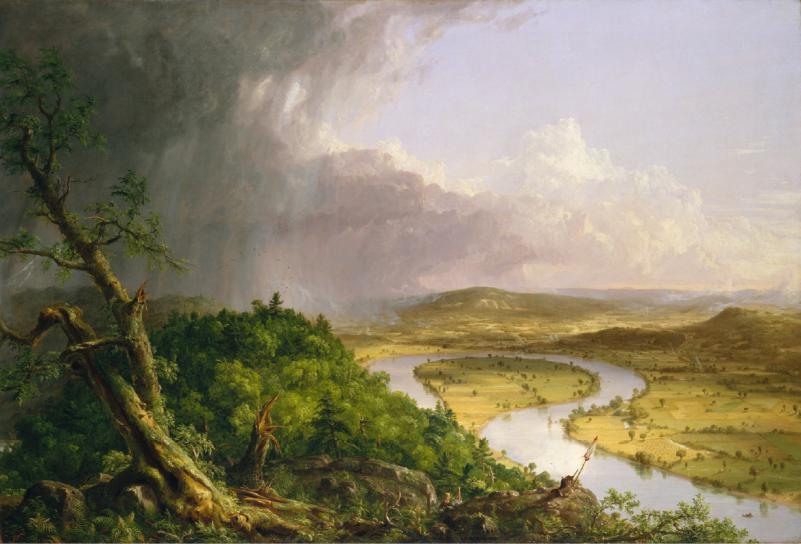 Photo by Wally Gobetz via Creative Commons “View from Mount Holyoke, Northampton, Massachusetts After a Thunderstorm (The Oxbow)”, by Thomas Cole, 1836.

Perhaps it’s said a bit too often that a picture is worth a thousand words. Yet art does reveal the natural world in a way that sometimes eludes the casual observer.

To paint a painting or draw a drawing or shoot that spellbinding photograph takes hours or even days of patient observation. When I sit down to sketch a plant or a panorama, I’m blessed with the luxury to just notice, and to build an appreciation that I couldn’t achieve by just passing by.

And when artists through the generations return again and again to an iconic landscape, they collectively document the dramatic changes in that landscape over time.

Artists have been inspired by the view from the summit of Mount Holyoke for nearly two centuries, ever since an accessible road and pleasing accommodations were built in 1821. (Undoubtedly the occasional intrepid hiker/artist was awed by the view in the 1700s, but their work does not survive in museums.) Since that time, our little mountain has garnered fame throughout the world. And why not? With its splendid 360-degree views of the Pioneer Valley the summit draws thousands of tourists, hikers and picnickers every year.

The Metacomet Range, of which Mount Holyoke is one of seven peaks, rises abruptly from valley below, cresting wavelike over the rich farmlands and quiet towns of the Connecticut River floodplain. On a clear day, walking the wrap-around balconies of the Skinner House, you can see Mount Greylock to the west, Mount Snow to the north, Hartford, Connecticut to the south, and Mount Wachusett to the east.

In the fall and spring, migrating hawks (who have an even better view of the landscape) circle and soar; so for some of your best views, look skyward.

The vista is lovely, to be sure, but it’s the long legacy of art that enables us to understand the changes that have shaped the Valley over 200 years.

In 1826, Thomas Cole visited Mount Holyoke. Cole was at the height of his romantic powers as an artist, and founder of the Hudson River School of American landscape painting. His luminous, idealized landscapes evoked the spiritual properties inherent in nature and stirred people to a new admiration of the beautiful American terrain, especially as the western frontier was being tamed rapidly and industrialization was transforming eastern towns. It was a time of humanistic foment: His contemporaries — among them Henry David Thoreau, Ralph Waldo Emerson and William Cullen Bryant (visit his house in Cummington) were singing the praises of a disappearing “nature.”

Cole painted an occluded view of the Valley — View from Mount Holyoke, Northampton, Massachusetts After a Thunderstorm (The Oxbow) — showing a striking serpentine curvature of the Connecticut River snaking through the clayey, pliable sediments of what had once been glacial Lake Hitchcock. He exaggerated the circular form of the Oxbow a bit, to contrast its roundness with the craggy sharpness of the Mount Holyoke summit. His painting, though, leaves us a reasonable record of how the river looked. He also depicted a pastoral tongue of land, soon to become an island, dotted with American elms (which, of course, due to Dutch elm disease, no longer survive today).

Four years later, a massive March freshet spurred the Connecticut River to slice through the narrow neck of land — to pinch off the Oxbow so that the mainstem would find its way more directly downstream, ever seeking the sea. Rivers simply do this — changing their course, abandoning islands, washing out sandbars and creating others downstream. Indeed, artistic styles and movements do the same.

As early as the next year, the river dumped sediments at the north end of the Oxbow — a process that would eventually cut the loop off from its mother river. That in-filling was hastened by human efforts to create a convenient railroad crossing.

Other cuts into the smooth arc of the Oxbow were made to build Interstate I-91, which makes its own gentle bend as it proceeds south from Northampton.

Today, the Oxbow is a calm backwater that hosts great blue herons, ducks and other wildlife, and still attracts paddlers and artists. Its current one-way link to the mother river is a thin channel, from which a boater can gaze up the flank of Mount Holyoke to the notable white landmark of the Skinner House.

In the ensuing years, painters, engravers and photographers have documented the changeable nature of the river and its tributaries. The Mill River, for example, which once threatened Northampton and northern towns with devastating floods, has had its course re-routed by engineers so that it drains more placidly into the Oxbow, avoiding downtown. A ghost-river now runs through the center of the city, where large sycamores are the only reminder of its presence.

Today, hundreds of Valley artists record the landforms and cities that define the Pioneer Valley. What will their aesthetically oriented grandchildren see and celebrate? Take some time today to really look at — and perhaps make a sketch — of our ever-changing scene.