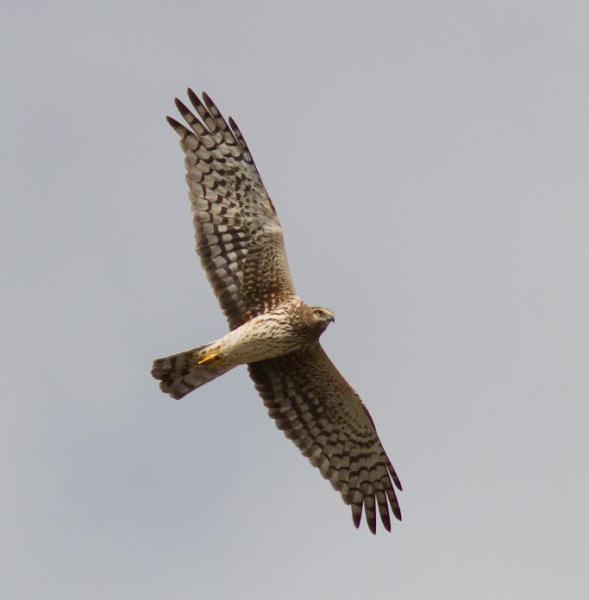 Every October they arrive, with the oranges and crimsons of the sugar maples beginning to fade and the low-bush blueberry leaves flushing scarlet. The greens of summer are mostly gone, replaced by the reds, purples and browns of autumn. One morning I‘ll look out and there they’ll be: one or two northern harriers, previously known as marsh hawks, hunting the blueberry fields. I’m used to seeing their flight over the winter salt marshes out on the coast at Plum Island. Seeing them here in the high Berkshires, however, often feels like a surprise, perhaps because their appearance seems so sudden and short-lived. But there is really no reason not to expect them.

The habitat is perfect for them on migration: low growth with few obstacles and lots of rodents. They seem to float low over the ground, just over the tops of the vegetation, so agile and buoyant, twisting and turning in response to slight variations in contour, winds, shrubs or prey sightings. Every once in a while one hovers briefly then drops to the ground and often rises with a small mammal in her talons. After a day or two they’ll be gone, headed off to their wintering grounds.

Harriers are 16 to 24 inches long, medium-sized raptors with slim profiles. They have long tails for maneuvering while hunting and they hold their wings up at a shallow V angle while in flight. Unlike many of our raptors, males and females have different plumages with males being grayer and females being redder overall. They both have a large, readily visible patch of white at the rump that you can pick out while they’re in flight.

Harriers are listed as threatened on the Massachusetts rare species list. Their breeding range extends from New England north to the maritimes and northern Quebec, then across the continent to Alaska, south along the coast to central California, and back through the central Midwest. They breed from March to July in Massachusetts, primarily along the coast. Males perform a spectacular flight display for females called skydancing. They dive, turn aerial somersaults, fly loops and tumble in the air, accompanying these with shrill screams. After mating, females build a nest of grasses, weeds and other vegetation directly on the ground or slightly elevated. Usually between three and six eggs are laid with only the female incubating. Eggs hatch after 30 to 32 days. The male provides food for the female as she incubates and broods the young until fledging, which occurs 30 to 35 days after hatching.

Harriers prey mostly on small mammals as well as birds, insects, amphibians, reptiles and other creatures found in their grassland and wet meadow habitats. Voles form an important part of their diet and studies have indicated that northern harrier nesting success is correlated with vole population numbers in the breeding territory.

Their winter range encompasses most of the lower 48 states and extends south to Central America and the Caribbean.

Each autumn, when I see “my” northern harriers, on their way south from I-can’t-be-certain where, I am struck with what a privilege it is to spend time in such a wild, beautiful place. And I feel so lucky to know the species and enough about their life history and habits to perceive a deeper significance in what I see. I am aware of the migratory responses this bird has to the change of seasons and I see how it relies on our blueberry barren habitat and the prey species it finds there. And I remember other places and times I have seen this bird. In a wonderful sort of way I don’t feel alone — I feel rooted, connected and comforted — belonging to my place; and also connected globally to the far-flung limits of this species’ travels.

Earth Matters, written by staff and associates of the Hitchcock Center for the Environment at 525 South Pleasant St., Amherst, appears every other week. For more information, call 256-6006 or write to us.