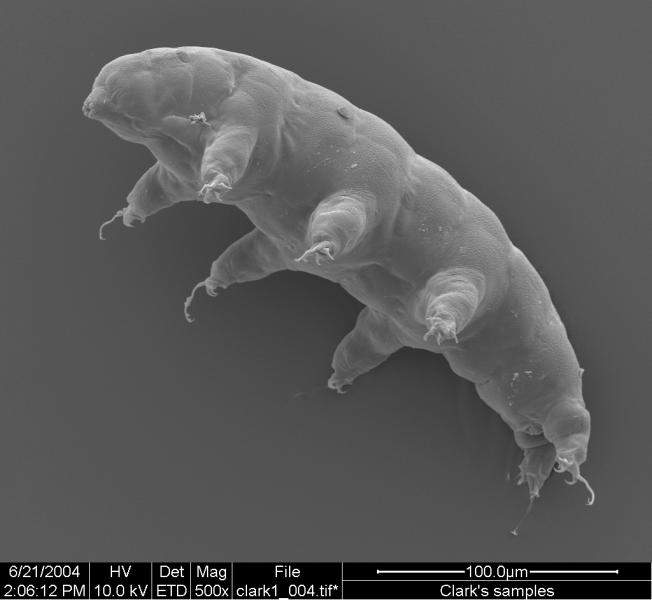 A water bear in the genus Milnesium is caught on the charge in this scanning electron micrograph. © 2014 by William Miller. Used with permission.

Last summer, I had a close encounter with bears. A sow and her two yearling cubs ambled across my yard in Florence. (I quietly put down my gardening tools and stood stock-still as they made their way into the trees). Such meet-ups are not uncommon in the Pioneer Valley — we share the landscape with bears and hardly give it a thought unless our bird feeders get raided. Recently, however, I had another encounter with bears of an entirely different variety: water bears.

Also known as “moss piglets” and “tardigrades” (the latter an Italian reference to their “slow gait”), water bears are among the most endearing of microscopic creatures.

They’re up to a half-millimeter long, chubby, with four pairs of stubby, wriggling legs, two eyes, and a conspicuous ursine snout. Their surprisingly complex bodies are nearly translucent, except when their guts are full of their favorite eats: algae, plant and animal fluids, plankton and bacteria. They look fragile, but water bears are also among the toughest species on Earth, making our big, furry bears look like weenies.

Water bears have been part of Earth’s fauna for at least 550 million years (mammalian bears have only been around for 10 million). What makes some water bear species so amazing is their incredible ability to tolerate environmental extremes. Subjected to challenging conditions, a water bear will curl up into a tight ball, secrete a coating, increase its internal sugars to maintain osmotic balance in its cells and become a “tun”: a cyst-like being in suspended animation. Seemingly lifeless, with 99.9 percent of detectable metabolic activity at a standstill (how’s that for hibernation?), a tun blessed anew with water and air will resurrect itself unscathed, even after 100 years.

Tuns of some water bear species can survive temperatures as frigid as -495 degrees Fahrenheit and as searing as +303 degrees Fahrenheit. No oxygen or fresh water? No problem! Some species live happily on the ocean bottom, but tuns can survive pressures six times that. (How’s that for a bear hug?). Subject them to radiation 1,000 times that which would kill a bear, and they waddle away, unimpressed.

Most astonishing, some water bears are capable of surviving the hard vacuum of space.

Carted up on 2007 and 2011 missions to low-Earth orbit, water bears withstood a milieu with no gravity and no atmosphere. This amazing capacity leads some scientists to wonder if water bears actually could have come from outer space, perhaps hitchhiking on an asteroid. It’s not outlandish to hypothesize extra-terrestrial origins of earthly life (this “panspermia” idea has been proposed by everyone from fifth-century Greek philosophers to physicist Stephen Hawking), but so far, evidence is lacking and it’s not clear how they would survive a fiery entry into Earth’s atmosphere. We have much to learn.

We learn the most, of course, when we study water bears in their tiny natural worlds. In the dead of winter, I ventured into the woods in search of them. I brought home small tufts of lake-side mosses, sphagnum hummocks, logs clad in lush green and lichens from deep fissures in tree bark—all moist microhabitats known to harbor water bears.

I placed the whole lumpy mess into a bowl of water overnight. The next morning, I sifted through the samples, staring hopefully into my dissecting microscope. Like an alien myself, I plied dense forests of moss, peered under umbrellas of lichens and swirled particles of dirt into tiny tornadoes. I roused minuscule beetles from their winter slumber. A few bewildered caddisflies emerged, yawning, from their self-constructed homes. Worm-like nematodes snaked about. Two-plus hours of searching revealed an astounding, undersized universe; I was transfixed, hardly disappointed at not finding my intended quarry. I was about to give up and do something useful, such as checking email or getting to my day job, when a squirming something, hidden beneath a moss clod, caused a ripple in the water: a water bear, climbing a hair-like moss stem with its minute claws! It’s usually this way with natural history; just as you’re about to lose patience, somebody interesting comes out of the woodwork. Yes, I jumped up and down.

For all I know, I might have found a new species, so little is understood of these organisms. More than 900 species have been described since their discovery in 1773, inhabiting zones from the high alpine to the briny deep, from the tropics to the poles, but we know much more about their bizarre physiology than about their day-to-day lives.

Could their superhuman (so to speak) physiology give us clues to the origin of life on Earth or yield new ideas about how to survive environmental extremes (perhaps those of our own making)? Certainly their tenacity — and the reward of seeing one alive after painstaking searching — has taught me something about persistence, just like a bear learns to wait out the bees while nosing after honey in a hive.

Elizabeth Farnsworth (aka “Goldilocks” to her friends who know her big hair) is Senior Research Ecologist at the New England Wild Flower Society. She thanks Randy Miller of Baker University for his tardigrade expertise.

This column marks the fifth anniversary of “Earth Matters.” The Hitchcock Center would like to thank our readers for their interest and support. Special thanks to our numerous authors who have provided such a diversity of topics and viewpoints over the years. We look forward to many more informative and entertaining columns, and of course welcome any comments, suggestions or questions from readers.