What color is your praying mantis?

You may have noticed some large, charismatic insect friends hanging out in tall grasses or low bushes lately, or perhaps absorbing the warmth of the sun on the side of a building.

Late summer and early fall is prime time for seeing praying mantises. The adults have finished mating and the females are out and about laying their egg cases, known as oothecae. As winter approaches, the adults will die and their oothecae will be left behind to overwinter, awaiting the warmth and moisture that comes with spring. At that point the conditions will be right and eggs will hatch. Somewhere around 100 to 200 nymphs will emerge from the ootheca, and this next generation will disperse amongst the grasses and shrubs that will be their home for the next several months. 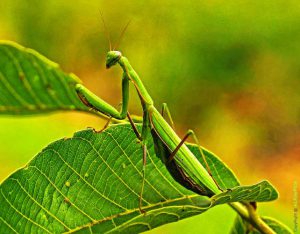 In Massachusetts there are two species of praying mantises, the Chinese mantis, Tenodera aridifolia, and the European mantis, Mantis religiosa. As you can guess from their common names, neither of these insects is native to North America. Both species were introduced over 100 years ago, likely by gardeners looking to control pests.

Here at the Hitchcock Center we’ve seen our fair share of mantises. One difference between the two is their size. Chinese mantises are the largest mantis species among more than 20 found on our continent, reaching 11 centimeters (4.3 inches) when full grown. European mantises reach 7 cm as adults. In both species, females grow 1 to 2 cm longer than males, and are less agile but more physically powerful. Another difference between the European and Chinese mantis is the patterning on the head. Chinese mantises have vertical stripes on their faces whereas the faces of European mantises lack stripes.

Individuals of both species come in green and brown types, or morphs. Once, when some students in a Hitchcock homeschool program were observing a brown European mantis sunning itself on the side of our building, the students speculated on why some mantises were green and others were brown. No one (including the teachers!) knew the answer, although several great hypotheses were suggested.

This question of why some mantises were brown and some were green has been an open topic of research at least throughout the 20th century, with lots of hypotheses suggested but until recently no good evidence to support one idea over the others. A popular explanation was that the morph color was camouflage. Others observed that individual mantises could change from green to brown, or vice versa, after they molted their exoskeleton, and that the switch seemed to be associated with changes in the temperature and humidity of their environment. The answer, it turns out, seems to be a little of all of the above.

My curiosity about this led me to a 2010 paper in the Bulletin of Insectology by Roberto Battiston and Paolo Fontana titled “Colour change and habitat preferences in Mantis religiosa.” The authors studied European mantises in northern Italy and recorded data relevant to their coloration and habitat preferences. 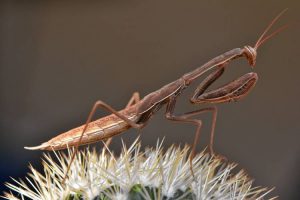 They also raised several European mantises in the lab. This gave them the opportunity to directly control the background color the mantises were living on. The captive mantises were kept on brown sticks and dirt, and displayed green tones by the end of autumn, but less intense greens than those seen in wild individuals, and the entire body didn’t always change.

The authors concluded that the hot sun, low humidity and intense light of the Italian summer promoted the production of both brown ground vegetation and brown mantises. More moderate temperatures, higher humidity and low light intensity promoted green vegetation and mantises. In other words, climatic variables are a causal factor in mantis color change. But while sunlight and humidity can trigger a praying mantis to shift its color after a molt, this adaptation is likely a response to predation pressures. A brown mantis during the green summer (or a green mantis during the brownish fall) would be easier for a visual daytime predator like a bird to see.

Climate, plant color and hungry predators are all factors interacting and resulting in a brown or a green mantis. Through the observation of one insect we get a glimpse into the dynamic relationship of variables that are constantly interacting and influencing one another in our world. This question of mantis color can open our eyes to the immense complexity of the interconnected web of life that we’re a part of.

This study provides good support for the concealing-coloration hypothesis for mantis color change, along with good evidence for climatic variables contributing to the change. I wonder if we would find the same patterns in mantis coloration if we repeated the study here in Amherst? Have you seen any mantises this summer and fall, and if so, were they green or brown?

Patrick O’Roark is an environmental educator and live animal caretaker for the teaching animals at Hitchcock Center for the Environment.

14 responses to “What color is your praying mantis?”