What ‘men’s work’ has to do with preserving the planet

In the past few years, we’ve seen many twists and turns of emotion around gender. Recently there has been an inspiring surge of women stepping forward to assert their dignity and rights, alongside continuing revelations of toxic masculinity in the corridors of power. Simultaneously, the growing environmental justice movement is highlighting the importance of hearing the voices of marginalized groups in matters of the earth and how we live on it. Men have a key role to play in this process as well. 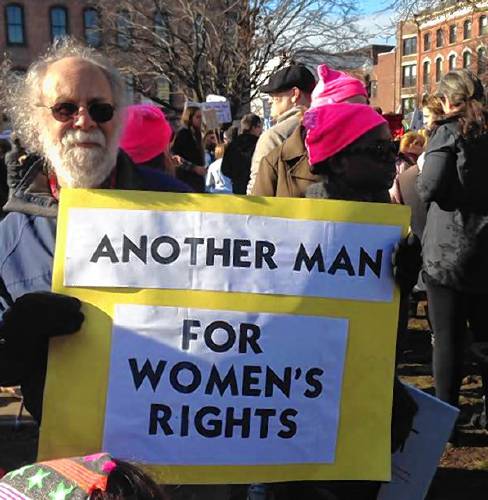 The author at the Jan. 21, 2017 Women’s March in Greenfield. Courtesy of Ava Fradkin

Pro-feminist men’s work entails self-examination, self-discovery and openness to change. These processes offer direct parallels to creating new paradigms for the new “green man.” This work applies equally well to stopping violence against women, ending racism and homophobia, and restoring the world’s ecological systems. To realize these goals, eco-conscious men are needed to help counter a (mostly male) culture of domination and create instead a culture of connection. For me, these paradigms take shape in the following challenges for men.

Be in feelings. Begin where we all need to begin, in your own heart. Rediscover awe and wonder in the diversity and complexity of life. Give space for your love of the world around you and your outrage at the threats to its existence. Let go of your capacity to rationalize those threats away as “necessary,” “inevitable” or “acceptable.” Experience the feelings and intuitions of others as deeply as your own.

Seek and grow connection. As boys grow into men, we are taught to isolate, to compartmentalize, to dissect. This is equally true for how we examine the world and how we treat ourselves. The real world is just the opposite. Life occurs only in connection with other life. We think we see individual trees as we walk in a forest when in fact every tree is connected through a vast network of roots and symbiotic fungi. The fox and the rabbit are what they are because of each other; so too the frog and the fly, the bee and the flower. Humans are no different. Men, in particular, need to rediscover connection with each other, to see ourselves as part of an intricate web of life rather than as somehow outside of its flows and cycles. Only then can we see clearly our role in keeping that web intact.

Listen, especially to those whose voices are not usually heard. Men are often raised to take charge, to have the answers, to “know.” Attitudes such as these have contributed to the problem as much as, or more than, to the solution. Women, especially in less developed countries, often have very different experiences of environmental problems than do men. Communities of color experience environmental degradation in their neighborhoods as another form of racism. Native peoples know that resource exploitation and neocolonialism are inseparable. Those of us who are used to thinking we know how to define problems and seek solutions need to step back and learn just how much we need to learn before we can be truly useful — and then, often not at center stage.

Question assumptions, including your own. Letting go of knowing the answers also means being open to being wrong — even fundamentally wrong. Wrong from the get-go. The holders of political and corporate power (primarily men) count on the public’s acceptance of their definitions of the situation: We need more oil, not fewer cars; it’s owls (or salmon or …) versus jobs; growth equals happiness. More men than women buy these assumptions, “accept” the risks, trust authority. We’ve got work to do with our brothers — and ourselves — so that we all begin by asking the hard questions about men’s role in creating the situation we’re in, and being prepared for uncomfortable answers.

Turn away from privilege and power toward cooperation and compassion. This is at the heart of what I believe men’s work to be. Whether we have privilege and power in hand or merely the promise of them if we play the masculinity game right, it’s time to recognize this as a path toward mutual destruction — of planet as well as of soul. As we listen to our feelings, seek connection, listen to others, and question assumptions, I believe we cannot help but move toward interpersonal and societal relations based on sharing among equals rather than benefiting from continued inequality.

For the next challenge, I offer this from a speech by the late Donella Meadows, environmentalist, author, professor and columnist:

“Operate from love. One is not allowed to say that in public anymore. Anyone who calls upon the human capacity for brotherly and sisterly love, generosity, compassion, will be met with a hail of cynicism. Once when I tried to do so, a high government official stood up to say, ʻOf all scarce resources, love is the scarcest.ʼ I just don’t believe that. Love is not a scarce resource, it is an untapped one.”

Finally, honor yourself for what you do, forgive yourself for what you haven’t done — yet. There’s so much to do, and the problems are so difficult and complex. Nothing is enough. But no step, however small, is not worth doing. Men’s work — loving, generous, compassionate, respectful work — isn’t easy. The pro-feminist men’s movement has been at this work for decades and it feels sometimes as if we’ve only scratched the surface. And so it is with creating a sustainable world, mindfully and in tune with natural rhythms.

Donella Meadows saw that changing the nature of human relations is essential to changing the relations of humans with nature. We can only start where we are, but we must start.

Michael Dover is a retired environmental scientist and a former board member at the Hitchcock Center for the Environment and the Men’s Resource Center of Western Massachusetts (MRC). The original version of this essay appeared in “Voice Male,” the magazine of the MRC, in 2001.