When do we find our place in the landscape? 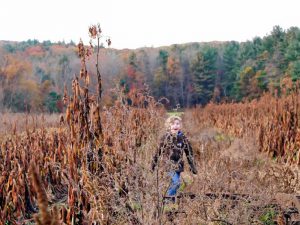 By John Stinton for the Gazette

I recently went cycling with a friend who told me that he’d had a wondrously strange experience — the world around him suddenly became intensely bright and immediate to his senses. How could that be, he asked? After 70 years of living, what had he been missing?

I suspect I have an answer to his questions. Early in my 40 years of teaching environmental studies, I tried to find ways to have students connect to the world outside their heads. Most seemed resistant to observing nature and bridled at being asked to spend a half hour outdoors quiet and alone. But sometime in mid-career, I discovered a book by a highly regarded social scientist, Edith Cobb, who gathered her life’s work together in “The Ecology of Imagination in Childhood,” first published in 1959. In it, she extolled the exquisite and innate connection that children develop to the natural world, chiefly in their pre-teen years.

What trick could I use to tap into that pre-teen world? A simple writing exercise: “Return to your childhood, sometime between the ages of 8 and 12. Describe the place where you grew up. Use language that includes all your senses including smell and taste. What paths did you take to and from school and to friends and secret places? Draw a sketch map of your neighborhood without regard to scale.”

I limited the writing to 10 minutes, which the students at first thought would be too long, but they soon complained it was too short, and more often than not, we would spend a half hour or more. What startled the students was the high quality of their work, especially those who did not consider themselves good writers. Many read their descriptions out loud to an attentive group of classmates.

What’s behind this phenomenon? According to Cobb, “Experience in childhood is never formal or abstract. … The world of nature is not a ‘scene,’ nor even a landscape. Nature for the child is sheer sensory experience.” There might be an evolutionary advantage in learning deeply about the place one inhabits. In traditional societies, elders spend hours teaching children the intimate details of their landscape. Without that knowledge, without an understanding of the dangers and rewards that lurk and lure the young, societies cannot thrive. I suspect there is a time of life during which our bond with the natural world develops most quickly as our brain develops and we acquire language and social skills, after which the budding connection to the natural world is cut.

Teenagers run into several roadblocks attempting to deepen their link to nature. There is always the adolescent preoccupation with sex, drugs and rock and roll. And there are parents and guardians, who themselves have already forgotten about nature, urging children to apply themselves to other pursuits. After all, as Paul spoke to the Corinthians, “When I was a child, I spoke and thought and reasoned as a child. But when I grew up, I put away childish things.”

I asked my biking friend if he remembered the place where he grew up with the same immediacy as he now experiences the natural world. He said yes. It is striking that old people can write some of the most arresting narratives of landscapes, and these writings exhibit a deep longing, a nostalgia for “that place.”

Gentle reader, please give yourself the present of returning to your place so that you can re-connect to the outside world. Use your gifts to get closer to your current world and share it with your older children and your friends. Take a silent walk.

Let me leave you with two descriptions of place from old people in Oregon, the first urban, the second rural, just to pique your interest.

“I feel fresh air, lots of air and lots of deep fog. I hear solemn fog horns like grandfathers’ voices, stern but comfortable. I see bodies of water — the ocean, the bay, the swimming pool at the Women’s Athletic Club… I am a voyeur. I hear horses’ hooves, the ’rags bottles sacks’ man’s litany, the milkman, the fire engines, the man who sends a dressed-up monkey to my window for coins. I hear the newsboy crying ’Wuxtry Wuxtry read all about it.’”

“I lived in Georgia for a while and felt a heavy claustrophobia, a weight on me from the scents and lushness and heat and night sounds all the while I was there. Eastern Oregon is not vast like the sea — there was always a sense of a range of mountains to the west, a barrier, on the other side of which there were ferns and ridiculous greenness and finally, the Pacific. Sounds were separate. At night there was one coyote, two crickets, a few disparate rustlings of wind, one owl. Each sound, each smell had a meaning that was separate. All within a context, vast, blue, full of weather. A hawk’s domain.”

John Sinton is adjunct professor of landscape architecture and regional planning at the University of Massachusetts, Amherst. He is a co-moderator of the citizens’ group the Mill River Greenway Initiative and an honorary board member of the Connecticut River Conservancy. He is also the author of a history of the Mill River (Williamsburg/Northampton) to be published by Levellers Press in April.