Why insects imitate one another 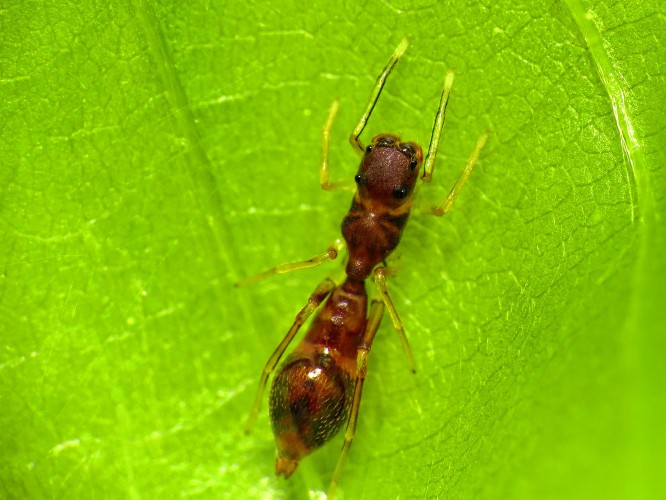 Sometimes we have to travel around the globe to gain new insights into the amazing variety of adaptations in nature; at other times, the opportunity for this awareness is right under our noses.

One day I came upon an eye-opening example of adaptation while working at my desk.

I was at my computer, surrounded by papers, books and dusty mounted animals, fingers tapping over the keys. I work at an environmental education center and I was trying to catch up on myriad emails and working to set up natural history programs for the coming season.

Suddenly a tiny something appeared just to the right of my right eye, hanging in mid-air on an invisible thread.

Of course, being a curious naturalist, I stopped my emailing and observed the creature. A small ant was what I saw. I nearly went back to my emails, but then an inner voice said, “Wait a minute. An ant? What’s an ant doing on the end of a long thread? Ants don’t make threads! Maybe it’s caught in the thread.”

When I touched it, the ant carefully, and with considerable coordination, gathered in some of the thread and pulled itself higher. “So it knows the thread and knows how to use it…” This required more investigation.

I grabbed one of our magnifying bug boxes and captured the creature. I looked at it through the lens and, sure enough there it was: an ant — six legs, two antennae, three body parts. But what about the thread? I looked closer and the creature began to come into a different focus as I gradually adjusted my understanding of what I was seeing.

The antennae were actually a fourth pair of legs held out to the front like antennae and colored darker than the other six legs!

Under magnification it was amazingly ant-like in appearance. The thin, narrow “waist” that is characteristic of the wasps and ants was fully visible — so unlike the chunky round appearance of so many of our spiders. However, that’s right: it was a spider — looking just like an ant. Who would have thought?

So then I did what any good naturalist does these days, I looked it up in Google Images. And it turns out that there are many spiders that mimic ants. Why would they do that?

Ants are in the order Hymenoptera that includes bees and wasps. Some ants sting, like wasps; some have poison glands, and many are aggressive when disturbed. Others have unpleasant scents or tastes, with accompanying bright colors to alert potential predators.

Some ant-mimicking spiders are covered with reflective hairs, simulating shiny ant bodies. Other spider species have colored patches around their eyes to expand their simple eyes to more resemble compound ant eyes. Spiders also mimic ants through their behaviors, waving their first pair of legs near their heads in ways similar to ants or adopting erratic zig-zag movements more closely resembling ants. One European ground spider carries the dead body of the prey ant that it has killed in front of it, shielding it from other ants in the colony. The living ants “assume” that the spider is just another worker ant carrying away a dead nest-mate.

In addition to visual similarities, mimicry can be chemical, with the mimic synthesizing compounds that resemble sensory hormones used by ants for intra-specific communication. An Australian jumping spider relies on chemical mimicry to live near and with weaver ants. Another ant species uses chemical mimicry to conceal its proximity to the weaver ants and, in turn, preys on them.

Mimicry can also be tactile, copying microscopic structures on various portions of ant anatomy used in communication via touch.

There are definite advantages to resembling an ant. There are many other non-ant arthropods that resemble ants for similar reasons — protection, disguise and even the ability to sneak up on ants to eat them.

Beetles, mantises, flies, crickets, mites, katydids, bugs and others have all adopted similar mimicry strategies to fool ants or predators.

Our little (4-5 mm) spider turned out to be Synemosyna formica. It’s not a rare species. But to me it couldn’t have been more surprising or more wonderful; another fantastic example, appearing right there in my myopic field of vision, of the amazing diversity of life on this planet.

This little spider mimicking an ant fills me with awe at the multitude of intricate ways that Earth’s creatures are interconnected. I guess imitation can indeed be a sincere form of… survival.

Ted Watt is an educator/naturalist at the Hitchcock Center for the Environment. He wishes to thank fellow staff member Jessica Schultz and the authors of “A Field Guide to the Ants of New England” for guidance on understanding what he was seeing. Another image of the spider he saw can be found here.