As our days get longer and warmer, the wildlife of our fields and woodlands are shaking off the challenges of our New England winters.

Not too long ago, nighttime lasted a seemingly interminable 14 hours, with freezing temperatures lasting for days. Ice covered ponds and streams; snow and “wintry mixes” sealed off the ground and animals in their burrows below.

The solutions wildlife use for surviving the life-threatening demands of winter are wonderfully diverse and are shaped by two branches on the evolutionary tree: Are they warm- or cold-blooded? Warm-blooded animals generate their own body heat by converting food and body fat to energy. Cold-blooded animals take on the ambient temperature that surrounds them, including freezing temperatures.

Warm-blooded mammals and birds have similar demands — they need enough food and stored fat to maintain body temperature as winter temperatures draw heat from their bodies.

Bobcat, fox and coyote spend most of their waking time in the fall eating to build winter fat stores. They spend the winter foraging to offset fat loss that occurs as they maintain a constant body temperature. For sleeping, they find shelter in dens, insulated by their fur coats from cold air.

Many birds solve the challenges of winter by migrating south. Those who stay face long, frigid nights.

Rather than slowing down, the great horned owl takes winter head-on, breeding during the coldest part. Territorial hooting at dusk begins in December, continuing through February. Taking over an existing nest, the female lays two eggs in late February or early March. With a body temperature of 103 degrees, she is able to keep the eggs at a comfortable 98. This is due in large part to the heat-trapping under layer of downy feathers covered by an outer layer of guard feathers. This insulation works so well the female can be found sitting on the nest covered in snow.

Hibernation is another path animals use to avoid the constant exposure to cold. Hibernation takes different forms depending on the species, ranging from true deep hibernation to torpor. In either case, the animal is less active, and body temperature, heart rate and breathing slow down. By slowing their metabolism, they conserve fat stores.

In our area, the woodchuck and little brown bats can go into a deep hibernation. Woodchucks hibernate for up to three months by reducing their body temperature from 99 degrees to 37, reducing heart rate from 80 to five beats a minute, and breathing from 16 to a mere two breaths a minute. The bodies of bats and jumping mice make similar extraordinary changes during hibernation.

Contrary to folklore, black bear don’t go into deep hibernation, but rather settle into a unique state of torpor. They are unusual in that their body temperature operates in a warmer range, dropping from 99 to 91 degrees, yet their metabolism drops to 25 percent of wakefulness. Their breathing slows and heart rate drops from 55 to nine beats a minute.

While the female sleeps, she gives birth, with her cubs nursing and maturing. Unlike deep hibernators, black bear in torpor can become aroused and active if disturbed. 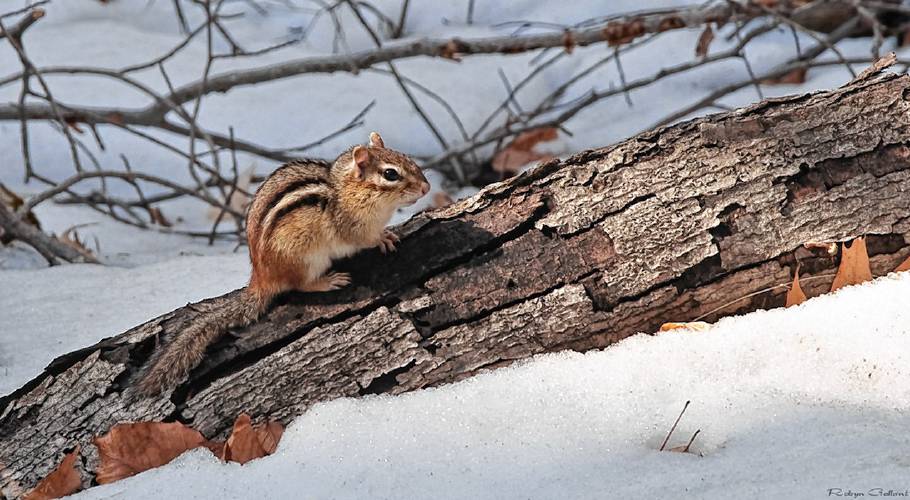 Chipmunks actively forage during warm spells, then settle back into torpor, where body temperature drops from 100 to 40 degrees and breathing is reduced from 60 to 20 breaths a minute. ​​​Robyn Gallant/via Flickr

Using a different strategy, during warm spells we see chipmunks actively foraging. Rather than relying solely on stored body fat, they wake from torpor and feed on food stored in nests, caches and burrows. After replenishing fat stores, a chipmunk settles back into torpor for days at a time, where body temperature drops from 100 to 40 degrees and breathing is reduced from 60 to 20 breaths a minute.

The common green frog, a cold-blooded aquatic amphibian, faces a very different threat: Their bodies don’t produce heat to prevent freezing. When the temperature drops below freezing, their body actually freezes — up to 65 percent of the water in their bodies can be frozen while hibernating.

Critical changes in body chemistry help prevent most green frogs from freezing to death. As temperatures drop, an enzyme works to keep the cells of vital organs, and the water around them, fluid and active by reducing their freezing points. When these lower freezing points approach, the liver produces glucose that is absorbed by cells, acting as antifreeze, keeping the cells from freezing and dehydrating.

Incredibly, when in this frozen state, they stop breathing and their heart stops beating. Until spring thaw, green frogs lie largely frozen on the muddy bottoms of ponds and streams.

Mammals, birds, reptiles, amphibians and insects have all evolved different ways to cope with winter, and the strategies and behaviors for surviving are as diverse as the species employing them. In these complicated times, as winter comes to an end, take a deep breath and enjoy a walk in the woods, and the wonder around you. Nature is good to us and for us.

Tom Litwin is a conservation biologist and former director of the Clark Science Center at Smith College. He is recently retired from the Jackson Laboratory in Bar Harbor, Maine and Farmington, Connecticut, where he served as the vice president for education, and continues as a visiting scholar. For more about how animals survive winter, see Ted Watt’s 2017 column. And to learn more about great horned owls’ breeding in winter, see David Spector’s 2009 column.