Winter can be a good time to start learning bird songs 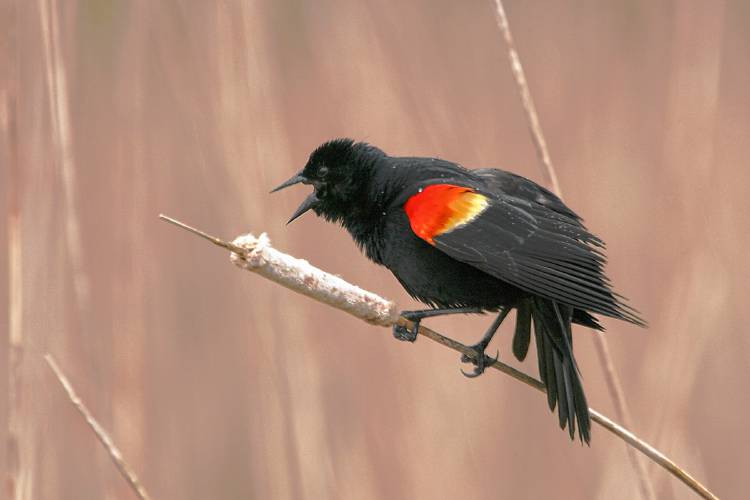 People unfamiliar with birds are often amazed at a birdwatcher’s ability to identify individual sounds from the natural chorus of birds, frogs, grasshoppers and others.

It’s not an inborn talent, though: Anyone who can hear can learn identification by ear, and in this column I offer some tips for learning bird sounds. Each person learns differently, so, as with any advice, use what works and ignore the rest.

Birds sing most in late spring, but now, in winter, is a good time to start learning songs. With fewer birds singing, it is easier to focus on individual species. If you become familiar now with the northern cardinal, tufted titmouse, black-capped chickadee, song sparrow and red-winged blackbird, you can add voices as they join the chorus over the coming months.

Most people find the longer, more elaborate songs easier to learn than the simpler call notes, much as a melody is easier to recognize than a single note.

An effective way to learn is to go outside with someone who knows bird songs. If you don’t have a friend with this skill, programs at the Hitchcock Center in Amherst and other organizations provide opportunities to accompany a leader who can teach identification. Asking people how they recognize a sound can elicit different hints, some of which may help you to learn the sound.

Descriptions of songs in field guides and other references can be useful. Your own descriptions jotted in a field journal can be even more useful. Perhaps naturalist John Burroughs’ classic rendition of the ovenbird’s song as an increasingly loud and emphatic repeat of the syllable “Teacher” works for you as it has for many birdwatchers over the past century and a half. Maybe poet Frank Bolles’ “teach us” is a better fit for your ear and memory. Maybe you can provide your own phrase that to your ear better fits the phrase repeated in the ovenbird’s crescendo.

Writing down what works for you helps fix a song in memory.

Be aware of tonal quality. The red-winged blackbird’s “okalee” and the eastern towhee’s “drink your tea” have superficially similar patterns, but the harsher, less musical tone of the blackbird’s voice (like a “raspberry,” according to naturalist Elizabeth Farnsworth) is distinctive. Feel free to mix and match descriptive techniques. Describing the Baltimore oriole’s song as a bugle-like “toot, toot, oriole” combines comparison to a musical instrument, onomatopoeic syllables, and a word with a connection to the species name.

Stories sometimes help. Is “fee bee-ee” difficult to remember for the whistled song of the black-capped chickadee, perhaps because this rendition is similar to the non-whistled “fee-bee” of the eastern phoebe?

The year-round “chick-a-dee-dee” call is more familiar to many people than is the spring-time whistled song of this species.

When I started to learn bird songs I was puzzled by descriptions like the scarlet tanager sounding like a “robin with a sore throat” until I learned some of the commoner birds. Once familiar, the songs of species like American robin, chipping sparrow and tufted titmouse allowed me to compare them with similar songs of species like scarlet tanager, pine warbler or Carolina wren.

Most people recognize a dog’s bark despite variation among individual dogs and with different situations (e.g., encountering a friend or a stranger). Similarly, don’t expect each song from a bird species to sound the same. There are individual differences and geographic variation in the songs of many species, and birds of some species have large song repertoires (up to several thousand songs for individual brown thrashers).

Attend to the pattern of song delivery. Does a bird rarely, if ever, sing the same song twice in a row (e.g., wood thrush, red-eyed vireo)? Does a bird sing the same song a dozen or more times before switching to a different one (e.g., red-winged blackbird, song sparrow)? How rapidly does a bird sing? Although these behaviors can be useful for identification, keep in mind that they can change with situation (e.g., mating status or territorial encounter) and time of day.

Enjoy the sounds you learn. Many rarely heard sounds are not especially important for identification but are wonderful aural experiences (e.g., the flight songs of ovenbirds and common yellowthroats). Furthermore, song allows experiencing some of a bird’s breeding behavior (singing evolved to help birds reproduce, not for human pleasure).

Males of many species interact intensely using songs, in some cases matching song types as they sing back and forth. Females of a few local species sing, and the vocal interaction within a pair of northern cardinals is interesting. Females of many species respond to their mates’ songs with short call notes (e.g., red-winged blackbirds). Many birds sing at much higher rates when unmated than after pairing. Attention to patterns of song use can provide insight into a bird’s biology.

Make this the spring a time when you impress your friends and relatives — learning even a few bird songs can make you the object of amazement.

David Spector is a former board president of the Hitchcock Center for the Environment and teaches biology at Central Connecticut State University in New Britain, Connecticut. For some basic information on identification, including recordings, visit All About Birds.

Here is a guide to using sonograms (graphic representations of sound) to visualize bird songs.