Winter whaling on the Cape 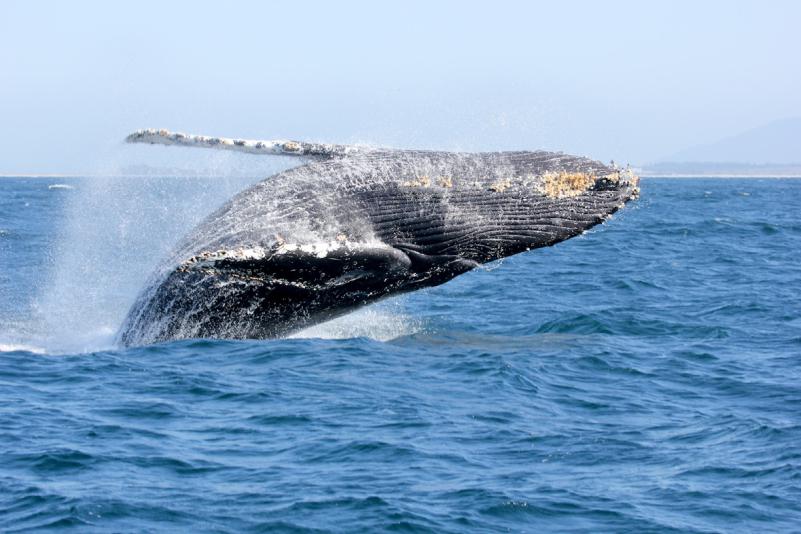 There is much of nature to see in western Massachusetts, but some experiences require travel farther afield.

Whales are among the creatures that I am least likely to encounter here, so I like to drive a few hours east into the Atlantic Ocean — a feat made possible by the configuration of Cape Cod, jutting some 40 miles out to sea from the New England coastline.

At this time of year the beaches of this great spit of land are not crowded with people and are wonderful locations to watch wildlife, including whales.

I have enjoyed seeing whales on many whale-watch boats, but I find a special pleasure in my own sightings from land. Over years of visiting Cape Cod beaches, especially Herring Cove and Race Point, in the fall, winter and early spring, I have identified the same species that I’ve seen from boat trips in New England waters: North Atlantic right whale, humpback whale, fin whale, minke whale, Atlantic white-sided dolphin and harbor porpoise.

There are advantages and disadvantages to each style of whale watching. On a winter beach I get much colder than on a summer boat trip, but I don’t risk motion sickness. More whales go unidentified when I am on my own without an on-board guide, but I get more satisfaction as I develop my identification skills. I don’t find whales on every trip to these beaches, so I value the days when I do see them all the more.

Whales seen from land are often distant; the land-bound whale watcher does not have the option of moving closer. On some windless days, though, the whales are close enough that I hear their breaths.

My memories include highlights of observations of different species: a North Atlantic right whale showing its great symmetrical tail flukes as it dove; a humpback whale throwing its whole body out of the water; and Atlantic white-sided dolphins riding the bow waves produced by larger whales.

A few weeks, ago I spent a couple of hours watching the ocean from Race Point Beach. In addition to several unidentified whales, I saw a narrow, tall spout followed by a large expanse of back with a proportionately small dorsal fin. It was a finback whale, the second largest animal alive today (at about 80 feet long). Two spouts together told me that two of these giants were swimming off the beach.

The North Atlantic right whales I occasionally see from Cape Cod are part of a tiny remnant population of a once common, but now endangered species. This whale was hunted for meat, oil and baleen. The great sheets of fingernail-like baleen that hang down from the upper jaw, which allow these and other baleen whales to filter tiny prey from sea water, were once valuable raw material for products like umbrella ribs and corset stays. Many of the few hundred remaining individuals occur in waters near Cape Cod in the winter and spring

With whale deaths from the animals being hit by ships and being entangled in fishing gear now apparently exceeding births, the North Atlantic right whale might not be here a few hundred years in the future, even as some other local whale populations seem to be recovering from hunting.

A few hundred years ago, I could have seen another species, the gray whale, from Cape Cod. This species was eliminated from the Atlantic by human hunting about 300 years ago. The decreasing sea ice in the Arctic Ocean has apparently allowed a couple of individuals to swim from the Pacific across the top of North America into the Atlantic. If more individuals follow and start to breed, the Atlantic may once again have a population of gray whales, a tiny side-effect of human-caused warming of our planet.

As I watch whales from the shore, I am reminded of the shore-based whaling that occurred here long before New Englanders started chasing whales farther into the oceans and around the world — the core of a major American industry for many years. Whale watching from Cape Cod makes me aware of the present as an instant in a geologic, cultural and biological seascape that is changing over both long and short time scales. Cape Cod came into existence thousands of years ago as melting glaciers deposited sand and gravel onto the edge of the continent, and the Cape has since been sculpted by the wind and water that move sand from place to place. Looking ahead a few hundred years, I realize that much, possibly even all, of Cape Cod may be under water as human-induced warming results in further melting of glaciers and consequent sea-level rise.

A short drive from western Massachusetts brings me to a great wildlife spectacle and to thoughts about my position, as both an observer and a participant, in the changing world.