With spring near, the red fox returns 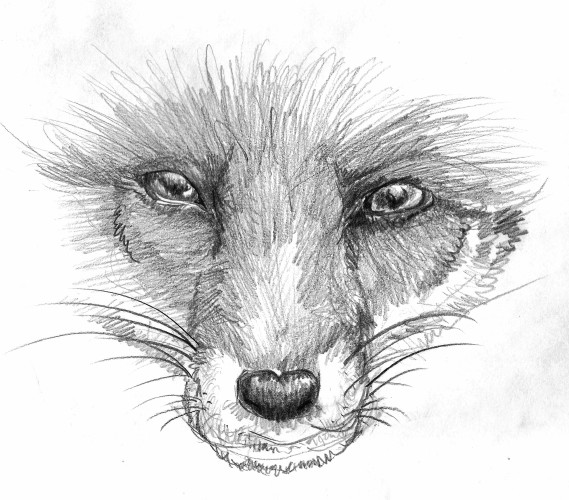 It’s March, and the woods are still drab, except for the wind-tossed evergreens, the landscape mostly cloaked in grays and browns. Today, the brightest member of my neighboring woods is a red fox — a flash of orange, white and black, now vanishing into the middle distance amid the trees.

That fox had been brightening my woods most of the summer and fall, but I haven’t seen her for several weeks. But now this vixen is showing a sure sign of spring; she is on the hunt for food to bring to her kits.

She has dug her den in the sloping, sandy soils on the edge of the woods. Heaps of dirt emanate from a deep hole that leads to a shallow underground tunnel that may be 50 feet or more in length, ending in a large chamber. Surprisingly, she may tolerate a woodchuck as a temporary roommate where their tunnels intersect hers. (Later in the year, though, she may gaze upon that animal as food.)
Most of the year, she will be out and about, returning to her den only to avoid nasty weather. But during the past mating season, that burrow has been a cozy home.

She holed up with her mate in December, a nuptial union lasting several days. She will likely stay mated to that male for most of her life.

About two months later, in February, she gave birth to a litter of probably four to six kits. Her babies were born blind, deaf, toothless and unable to maintain their own temperature — in short, they were almost completely helpless. So mom had to hunker down with them in her bunker for several weeks, provisioned by her mate, until the fluffy little brown balls of fur opened their eyes and started teething.

Now, their fur will gradually take on its characteristic rust-colored sheen, and their tiny ears and snouts will grow longer.

By the time they’re about a month old, the kits begin to eat the solid food their parents bring them. They’ll still be nursing for another few weeks, but they are becoming more restless and independent.

If I get the chance, it will be fun to see them out gamboling around like puppies, but this is a very rare sighting; the vixen will keep them very close and out of sight from predators like coyotes, and from overly curious humans.

Stealthy as she is, she will occasionally emit a high-pitched bark or even a longer howl — the latter to call her mate. Being somewhat territorial, she marks her roaming grounds liberally with her urine, warning off enemies as well as foxes that aren’t members of her immediate clan.

Her “clan” might consist of last year’s grown kits, which may stick around their childhood home if they’re unsuccessful establishing a different territory. The vixens from last year’s litter may assist with childcare, grooming, guarding and playing with their little sisters and brothers. Soon enough, though, they’ll have to strike out on their own. Most foxes will live only five years at most.

This morning, the vixen is on the hunt for voles, white-footed mice or even a plump rabbit, though she’ll settle for what berries, crabapples and rose-hips remain uneaten by birds. The snow-pack has been unusually thin this winter, so she has been able to catch her prey more easily, and she’s looking quite sleek and fat for a busy, nursing mom.

Most winters, she’d be all ears in search of tiny tunnels in the snow; her out-sized, acute ears can detect movement far underground. It’s said that a fox can detect a mouse’s squeak from 300 feet away. If she catches a minute rustling, she’ll leap many feet into the air, then nosedive deep into the snow to snatch her hidden prey.

It’s truly funny to watch a fox do a jackknife into the snow, landing with only its hind legs and that fat, white-tipped tail visible, waving wildly in the air, only to resurface with a wiggling mouse in its snow-covered mouth.

Wildlife biologists have noted that when a fox aligns its plunge with the northward-pointing magnetic field of the Earth, they are significantly more successful at catching their quarry. Why? Go figure! Yet another natural history mystery.

Although wary, red foxes seem increasingly easy about coexisting with humans. I have seen adults trotting brazenly across the Amherst Common in early morn, and my resident vixen puts up with my house, which sits squarely in her chosen territory.

Foxes have had a fraught relationship with humans for millennia, being despised and killed for preying on our livestock (the proverbial “fox guarding the hen-house”).

They also have figured prominently in myths and legends throughout the world, seen as symbols for cunning, witchery, deceit … but occasionally wisdom. Personally, I see the latter when I look into the eyes of my vulpine neighbor.

Elizabeth Farnsworth is Senior Research Ecologist with New England Wild Flower Society, an Illustrator, and a frequent contributor to Earth Matters. Watch a video of a fox hunting in mid-winter in South Dakota’s Black Hills, filmed by the Discovery Channel.